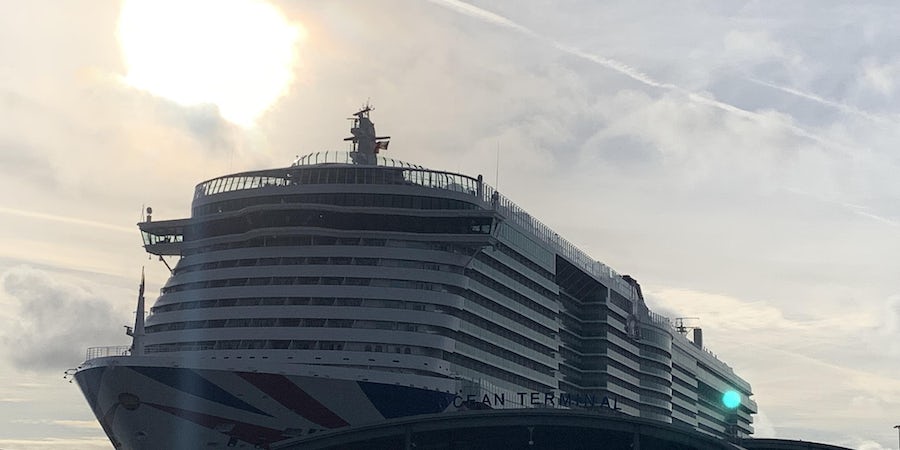 (8:45 a.m. GMT) -- P&O Cruises new ship Arvia opened the gangways to press and trade partners in Southampton ahead of its maiden Caribbean cruise.

The 5,200-passenger ship set sail on Friday for Tenerife where it is due to arrive today (Jan 10), before setting sail for Barbados.

Arvia is a sister to P&O Cruises' Iona, and will spend winter months in Bridgetown, offering Caribbean cruises, and the summer in the Mediterranean.

P&O Cruises' President Paul Ludlow was on the ship for the day, together with the line's "food (and wine) heroes" -- Marco Pierre White, Jose Pizarro, Olly Smith and newcomer to the line, Shivi Ramoutar.

"The great thing about this ship is people can come onboard for seven- or 14-nights and choose over 30 places to eat and drink," said Ludlow.

"You can't do it all in the time that you're with us -- you've got to come back. And that's what we really want to do -- hook people in and ensure that the P&O Cruises proposition remains relevant.

"P&O Cruises is the "best of Britain"… and I think what Arvia demonstrates is that we remain contemporary, relevant and salient to the P&O Cruises customer today."

P&O Cruises Arvia Has a Number of New Eating, Drinking And Entertainment Venues

To that end, the line has introduced a number of new-to-the-line eating, drinking and entertainment venues onboard.

The line has also teamed up with Ramoutar, who has selected a range of dishes from the Caribbean, South America and Mexico for the Beach House.

Pizarro meanwhile continues to offer dishes in the Olive Grove as well as tapas in the Glass House where Smith oversees the wines. And Pierre White prepares a special menu in the main dining rooms for "Celebration Nights".

On the top deck Arvia has P&O Cruises first ropes course at sea, above a mini-golf course.

The line linked up with ex-Take That frontman, Gary Barlow, on Iona in the form of the 710 Club, which highlights young, up-and-coming musicians hand-picked by Barlow.

Arvia will see the debut of Greatest Days, the Take That musical, which premieres on the ship in a few weeks' time, Ludlow confirmed.

Barlow -- who played two concerts onboard Iona last year -- is likely to perform on Arvia too: "Undoubtedly he'll be onboard soon," Ludlow confirmed.

All of the line's favourite venues make a return including Brodie's Pub, The Crow's Nest, Epicurean, Sindhu and The Keel & Cow.

"We operate this ship with 5,000 guests onboard and typically we would not have planned the maiden cruise at Christmas, but because of issues at the shipyard, the ship debuted a couple of week's late and therefore the maiden was at Christmas.

"And as ever there were a few bugs in the system and there were a handful of guests who had some problems at Christmas lunch.

"I am more than confident that the next sailing that those problems will be ironed out."

He added: "Unfortunately the news agenda was a little light at the time, so the coverage might not otherwise have been as strong as it was."

Arvia sets sail for Barbados this evening, on an eight-day crossing to its new homeport, where it will be christened in March at a beachside ceremony -- the first P&O Cruises' ship not to be named in Southampton The godmother has yet to be announced, but according to Ludlow that announcement will be "epic".