You may also like
Dismiss
2019 Atlantic Hurricane Season Outlook: What Cruisers Need to Know
"Cruising With…" Set to Return Next Year -- But Without Jane McDonald
Royal Caribbean's Odyssey of The Seas Cruise Ship Officially Christened
The Biggest Cruise Ship in the World, Wonder of the Seas, Has Arrived in Florida
Royal Caribbean Unveils New Entertainment Line Up on World's Biggest Ship, Wonder of the Seas
NCL Reveals More Dining, Design Details on New Cruise Ships Norwegian Prima and Norwegian Viva
Royal Caribbean Starts Construction On New Utopia Of The Seas Cruise Ship
A 'Thor: Love and Thunder' Cameo That Gets Cruise Fans Excited
Live from Grandeur of the Seas: The Beloved Lady G Cruise Ship Still Reigns
Just Back From Allure of The Seas' Maiden Galveston Sailing: Hits and Misses 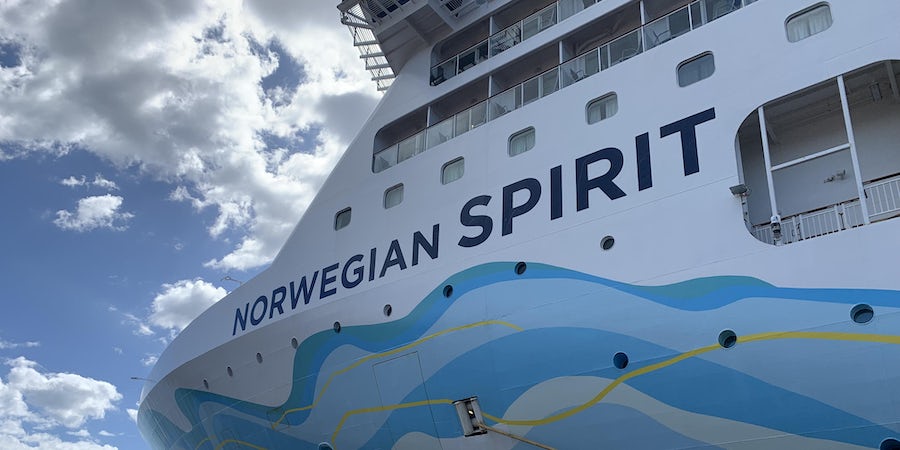 Live From Norwegian Spirit: From Fiji to Sydney on NCL's Completely Refurbished Ship

In reality, this translates more simply as public rooms, soft furnishings and carpets have been given a makeover, with occasionally a new venue or space carved out from an existing one. Cabins are usually not touched, save for some minor aesthetic updates.

So it's very rare to get on a ship where every single part of it has been given a makeover -- and a transformative one at that -- but this is exactly the case with Norwegian Spirit.

Norwegian Spirit may be the smallest (2,018 passengers) and the oldest (1998) in the NCL fleet, but its $100 million makeover in January 2020 -- NCL's biggest ever to-date -- has given this ship a modern look and feel, while maintaining the elements that make it one of the most popular ships in the fleet. In fact, it's in the top three, according to general manager Vuk Malobabic.

We got onboard for the last leg of Norwegian Spirit's repositioning to Australia, sailing from Fiji to Sydney. Moreover, when Norwegian Spirit docks in Sydney on December 22, it will become the first NCL ship back in Australia in three years.

Cabins on Norwegian Spirit Have Been Given a Modern Makeover

Cabins have been refreshed from top to bottom aboard Norwegian Spirit. Gone are the tones of aqua and green with golden wood finishes (a '90s look that had not aged well). Instead NCL has ripped out everything (except the TV) replacing it with an elegant, premium look and feel that started appearing on the later versions of Norwegian's Breakaway-class ships, and was so beautifully realised on its latest ship, Norwegian Prima.

It's almost as if this ship was a hint of designs to come: Scandi-inspired decor, with light-brown wood panelling for the cupboards and walls, chocolate brown faux leather headboards and dark-coloured carpets and taupe leather chairs and footstools.

The line has also replaced whatever charging points were here, and replaced with a bank of charging points (US and EU) above the fixed desk including USB ports (plus ones either side of the bed -- perfect for phone charging at night).

As for the shower rooms, the pastel bathroom tiles that were so behind the times, they'd likely be in back in fashion again soon and the fish and shell tiles -- all gone. Instead, you have a three-section room -- Hansgrohe power shower, wash basin and separate toilet area. Again, all dark woods and cream tiles that make this elegant and unfussy.

The 18 suites have also been given a significant refresh and follow the same elegant color palette as the rest of the ship. Although they are not part of a suites-only complex, they do have butlers and exclusive access to Cagney's, the ship's specialty steakhouse restaurant, for breakfast and lunch.

Suites have a separate living room with a marble-topped wet bar and a balcony, bathrooms with a stunning oval-shaped hot tub and shower stall with picture views, and a separate bedroom.

The only head-scratching aspects are the TVs -- small and old and sticking out (rather than flush against the wall), they have no interactivity (you can't check your onboard account); and they show the dated Safety Video on an almost continuous loop (if you want to know what this ship used to look like, check the video).

We'd have liked to have seen keycard activated lights and A/C installed (though we acknowledge this might have been too complicated considering the age of the ship).

Food Has Been Taken Up a Notch on Norwegian Spirit

Food (according to past guests and Editors) has always been a stand-out aspect of this ship, but post-refurb the line has further improved it -- and that's across all venues, not just the extra-fee specialty restaurants.

Always a good indication of whether food is being done right onboard is when as a passenger you are as content eating in a main dining room as you are in a for-fee venue.

Take Taste, one of the ship's two main dining rooms, where we've had food as good as in a for-fee restaurant -- and service to match: steamed clams, classic French onion soup (though not quite hot enough for our tastes); and mains including curry shrimp, garlic and pepper-crusted striploin and wild mushroom ragout. There is a wide variety of vegetarian and GF options, and we applaud the line for keeping a good selection of "classic entrees" (always available) on the menu -- NY strip, flounder fillet, herb-crusted chicken, shrimp fettuccini and three-cheese bake.

But the real standout -- again a first for me -- is the Garden Café buffet. Never too crowded, and thoughtfully designed with seating inside and out, the food here has been faultless. From the two omelette stations, to the fresh made eggs Florentine and eggs Benedict, to the pastries and bread varieties at breakfast; to the themed lunches -- Mexican, Indian, Italian, Asian -- which aren't just a nod to these cuisines, but authentic tastes and flavors (the Mexican and Indian dishes deserve particularly high praise); to the salad bar, which has daily specials reflecting the theme -- everything has been memorable.

Post-refurb, Norwegian Spirit now boasts two more of the line's signature spots -- The Local and Onda by Scarpetta -- as well as the existing Cagney's Steakhouse.

The Local is a great new spot, with the ambience of a sports bar (a number of passengers watched the World Cup final here at 2 a.m. on our cruise on the TV screens), and offering comfort food 24/7, think chicken pot pie, fish 'n' chips and prime rib in the evenings.

Onda by Scarpetta is one of the line's signature specialty restaurants and on Norwegian Spirit, replaces the space where La Trattoria once was overlooking the adults-only Spice H20.

Elegant and classy, this Italian restaurant serves up pasta, pizza a huge range of delicious appetizers, such as beef carpaccio, yellowtail crudo and short ribs; as well as Scarpetta's signature pastas.

There is a Wide Variety of Entertainment Onboard Norwegian Spirit

Norwgian Spirit can't host the mega-shows that you'll find on the bigger ships, but it still punches above its weight in terms of entertainment, with one of the most dazzling non-Broadway shows at sea: Elements; as well as Palace of Lights, which transports you back to 1950's Cuba and Blazing Boots, a tribute show to pop country.

Outside of Stardust you'll find a great new venue, The Social, an intimate nightclub where you'll find stand-up comedy, karaoke and the nightclub. Though it was never particularly buzzy on our sailing, we were told that it was very popular on the previous voyage.

Henry's Pub is great for a quiz and a pint, and Magnum's Champagne Bar with its excellent pianist, John Milligan, was full every night.

It was also refreshing not to have to book for anything, we could just turn up and be seated, whether that is in the restaurants, the shows or the comedy. It was nice not to feel the pressure of having to book through an app which is the way more and more lines are going.

NCL also took the decision to take out all the kids' facilities and replace the space with new cabins, and in the case of the teens club on Deck 12, a new multi-function room. The line also converted the pirate-themed splash area at the aft of the ship to an adult's only pool in keeping with its other ships.

This is a pretty radical move for a line which is very family friendly on its other ships, so what was the reasoning?

The answer is the Aussie market, which is full of family friendly ships from lines such as P&O Australia, Royal Caribbean and Carnival (with Disney on its way), according to Vuk. This was an opportunity to differentiate themselves, so although kids are welcome and there is limited family programming, Norwegian Spirit has become "adult-centric" rather than adult-only.

Service is Consistently Friendly And Intuitive

Apart from a blip at the shore excursion desk, service aboard Norwegian Spirit has been faultless. We may be sailing half full, so the crew: guest ratio is almost 1:1, but it's not just that, there's a real sense of joy on this ship: it's a happy ship, and that ripples down from the general manager Vuk to the waiters, the bar staff and the stewards.

Interestingly, according to Vuk, a former executive chef himself, a lot of that is to do with making sure the crew are well fed, with as much variety and quality for crew as well as passengers.

A couple of examples: In Taste, our waiter, Bharat, always refilled our glasses at exactly the right moment; not keeping us waiting for a second; when I mentioned about the temperature of the food not being quite hot enough, the Maitre d' came over to thank us for bringing it to her attention (a first for me) and instead of dessert he sourced and served fresh mint for our tea.

And another cruise ship first for me: being sung to at breakfast to the tune of "Can't Take My Eyes Off You" by three of the restaurant staff, singing "I love you coffee". Pure joy, and what a way to start the day.

Norwegian Spirit will be a great fit for the Australian market, one which we feel the locals will embrace with open arms as it starts its 12-day back-to-backs across the ditch to New Zealand through March of 2023, before returning back again in December 2023.

Unlike Norwegian Cruise Line's newest ships, Norwegian Spirit may not have a go kart track, a virtual reality room, water slides or a kids' club (removed in the makeover), or a Studio complex for singles or a suites-only Haven, but it doesn't need.

What Norwegian Spirit does have is plenty of charm, outstanding service, great food and a wonderful onboard vibe.