You may also like
Dismiss
2019 Atlantic Hurricane Season Outlook: What Cruisers Need to Know
Maine Opens to Overnight Cruises, Negative COVID-19 Test Required
Can a River Cruise Still be Fun in the Age of Covid-19?
P&O Cruises Restarts Cruising For First Time in 15 Months on Britannia
Norwegian Breakaway Cruise Ship Returns To New York: We Chat With NCL President Harry Sommer
Royal Caribbean's Odyssey of The Seas Cruise Ship Officially Christened
These Ships Are Coming Back To The U.S. in 2022: Here’s Why You Should Care
Royal Caribbean Starts Construction On New Utopia Of The Seas Cruise Ship
Royal Caribbean Showcases New Icon of the Seas Cruise Ship with 'Making an Icon' Video Series
Just Back From Allure of The Seas' Maiden Galveston Sailing: Hits and Misses 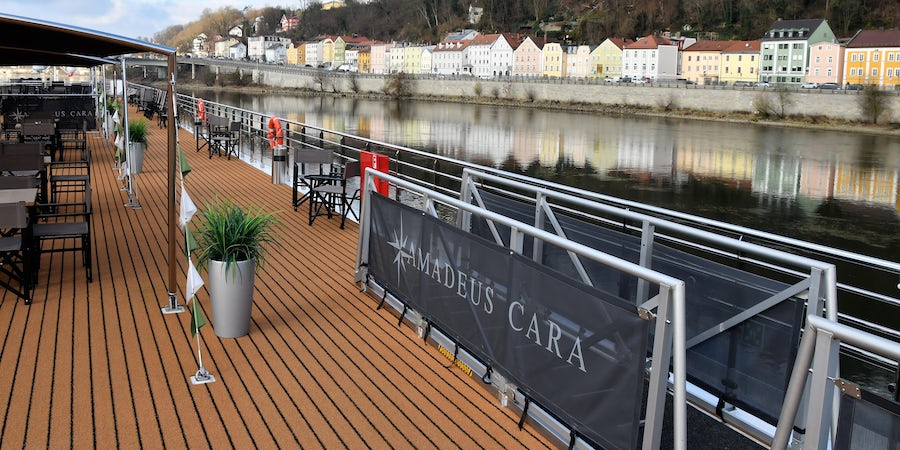 Live From a Christmas Market River Cruise: Celebrating the Holidays in Europe on Amadeus Cara

European Christmas market river cruises are guaranteed to fill you with seasonal cheer. They're a win-win vacation providing the opportunity to experience social history dating back hundreds of years, buy unusual presents for family and friends and soak up culture and seasonal goodwill along the way.

We are sailing on Amadeus River Cruises' recently launched 162-passenger Amadeus Cara on a six-night Magic of Advent on the Danube River itinerary from Nuremberg to Vienna.

Here's a taste of what you can expect on a European Christmas market sailing and our first impressions of the line's new flagship.

Germany is undoubtedly famous for its Christmas market scene -- with large cities such as Cologne having seven main markets. You'll find them throughout mainland Europe, almost everywhere you go, from the middle of November through December 23.

On our Danube River sailing, we had the chance to visit markets in Nuremberg, Regensburg and Passau in Germany, and Melk and Vienna in Austria. While you'll see similar things in every one you visit -- Christmas ornaments, decorations, toys, gingerbread, crafts, hats and gloves -- don't think that once you've seen one you have seen them all. They all have an individual charm and character; be it the location or history surrounding the market.

For example, in Vienna there are markets set against the backdrop of grand buildings such the Schonbrunn Palace. We learned that Nuremberg's Christkindlesmarkt is one of the oldest in Germany and also one of the most authentic due to the city's legacy for making gingerbread and manufacturing toys, including tin cars and train sets. It's also famous for its spicy pork sausages which are much smaller than typical German sausages, or wurst, and sold in portions of three or more. That said, if you're feeling really hungry most markets sell half-metre (20 inch) sausages sandwiched inside an equally long piece of bread.

The markets are at their most atmospheric in the evening when the wooden chalets are decked out with twinkling lights. Our favorite excursion was the night-time trip to the Romantischer Weinachtsmarkt in the grounds of Thurn and Taxis Castle in Regensburg. After a guided tour around the vast palace, which is still the home of German nobility, the market had a really magical air. There were log fires, upscale stands including a lofty Champagne chalet overlooking the market, and a poetry recital by the angel-like "Furstlichen Christkinder" who sprinkled sparkling "stardust" over visitors.

Tip: Make sure to take Euros, ideally smaller notes and coins, as the majority of market stalls do not take credit cards. Also, you often need Euro 50 cents to use public restrooms.

Don't Be Surprised at The Cost of Mulled Wine: The Mugs Make Great Souvenirs

Sipping warming gluhwein, or mulled wine, is a must-do on a visit to a Christmas market. If you're on a morning tour and feel it's too early in the day, then opt for the widely-available alcohol-free version of the steaming cold weather treat.

One thing you need to be aware of -- which caught us out at our first-ever market when we carefully counted what we thought was the correct money -- is that you will be charged some four or five Euros more than the advertised price. All of the larger Christmas markets have their own colorful gluhwein mugs, which are different each year. When you buy your mulled wine, the vendor will hand you a token for each serving.

If you love your mug, and they do make great souvenirs, then simply hang onto it and take it back to the ship with you. If not, return it to the stall with your token and you'll get the deposit back.

Baby, It's Cold Outside -- But You Can Still Sit Outside

Just because it's chilly doesn't mean you have to miss out on the local coffee culture and a spot of people watching. The bars and cafes where you can sit outdoors and drink local beer and specialty coffees (such as melange -- a Viennese version of cappuccino made with a milder espresso coffee) adapt for the wintertime. You'll find chairs covered with cozy sheepskins and there are blankets to borrow for the duration of your stay.

In Vienna, in particular, it's common to while away an hour or more over one coffee and the waitstaff will never try and move you on. In many places you'll find outdoor patio heaters, too.

Aside from the ship being beautifully decorated for Christmas, we were surprised by several unexpected and imaginative inclusions on our itinerary which made the sailing really memorable and special. So if you sail on a Christmas market cruise you might find some neat extra treats in store.

Unbeknown to us, we had booked our Amadeus Cara cruise to coincide with Saint Nicholas Day, which is widely celebrated across Europe. The night before, children traditionally leave a shoe or boot outside the front door and, if they've been good, wake up to find candy and little gifts inside. If they are naughty, Saint Nicholas might leave a piece of coal, a potato or a stick instead. The cruise director invited us to leave footwear outside the cabins and it was great fun to go out in the morning and find them filled with fruit, nuts and chocolate. (We didn't hear of any passengers getting coal!).

Another day there was an onboard "Christmas market" where one of the waitstaff dressed as Santa and served gluhwein and there was the chance to try our hand at decorating gingerbread and other fun things. One afternoon, "wanted posters" for Santa, a reindeer, elf and toy soldier went up around the ship and at the allocated time passengers set off on a treasure hunt with finders getting to keep the figures.

You get an extra level of cultural immersion sailing with a European-based river cruise company. Although Amadeus might be not as well-known in the U.S. as some other lines (albeit the week after our cruise, the ship was chartered out for an exclusive sailing for North Americans) the family-owned Austrian company has more than 40 years of river cruise experience. It operates one of the most modern fleets on the waterways and the addition of Amadeus Cara's sister ship, Amadeus Riva, in 2023 will bring the number of vessels to 10.

The Austrian DNA is reflected through a wine list showcasing Austrian wines that many passengers might not have tasted before. These also include free-flowing red and white wines served to anyone on a package where wine is included with lunch and dinner. Menus feature items themed to the destination, such as noodles served in a cheese sauce with crispy onions, and the classic Wiener schnitzel with potato salad.

Elsewhere, the Cafe Vienna area featured on many of the Amadeus ships has grown into a distinct standalone venue on Amadeus Cara. The menu has specialty for-fee coffees such as the Maria Theresia served with Cointreau orange liquor, whipped cream and orange zest.

Other tweaks on Amadeus Cara include an innovative split-level sun deck which will come into its own during summer sailings. When river water is high, and ships have to sail under low bridges, the upper deck can sometimes be shut to passengers for long periods at a time. On Amadeus Cara -- the line's first vessel constructed at the TeamCo Shipyard in the Netherlands -- the forward section of the front deck has been lowered to overcome this issue and it will never have to be closed off. The ship's 10 suites feature all-new triangular shaped balconies which provide more room in the cabin when not in use and floor-to-ceiling windows that slide to one side on sunny days to provide an airy indoor balcony concept.