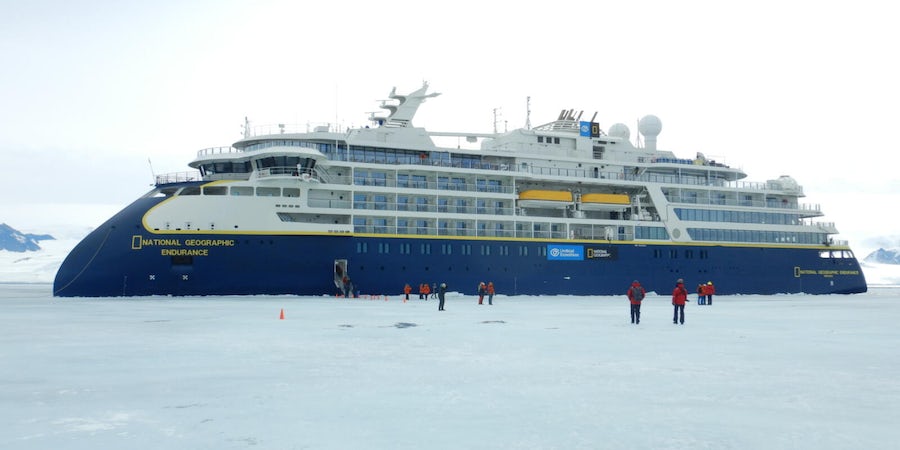 Just Back from Antarctica, South Georgia, and the Falkland Islands with Lindblad Expeditions

A cruise to Antarctica is on most travelers’ bucket lists, as the white continent is unlike any other and the most difficult to reach. To follow in the footsteps of intrepid explorers such as Sir Ernest Shackleton and Roald Amundsen was my dream for several years, and it finally came to fruition last month with Lindblad Expeditions.

My three-week odyssey began with an overnight stay in Buenos Aires, Argentina, before boarding a Lindblad chartered flight to Ushuaia to board the 128-passenger National Geographic Endurance. In the 20 days that followed, I - and 114 other adventurers - sailed to the Antarctic Peninsula, South Georgia Island, and the Falkland Islands, coming face-to-face with breathtaking scenery and prolific wildlife that I can only describe as awe-inspiring.

Here's a look at why Lindblad Expeditions-- and a longer trip that visits more places -- is a great choice for Antarctica.

Lindblad is an Antarctica Cruise Veteran

Perusing through the list of companies to facilitate this grand adventure, Lindblad Expeditions stood out for me for several reasons. Lindblad pioneered travel to Antarctica in 1966, their experience alone is commendable. The company also has a philosophy toward exploring responsibly, giving back to the environment through sustainable practices, and fostering scientific research. Their partnership with National Geographic speaks even louder about their commitment to exploration and conservation.

Our 14–member expedition team consisted of a fearless leader from the Falkland Islands, a certified photo instructor, a host of naturalists, penguin experts, divers, plus two scientists from Oxford University who were hitching a ride to conduct penguin research at the various colonies. Another Lindblad bonus: a National Geographic photographer accompanies every expedition. This incredibly talented team formed the core of our program, sharing their collective wealth of knowledge and expertise with us every day.

Although several Lindblad vessels explore Antarctica, National Geographic Endurance was my top pick. One look at its profile, and you’ll notice that the bow is curved back rather than pointing forward. This innovative inverted or “X-bow” design enables the ship to part the waves instead of slamming into them, resulting in a much smoother ride. This efficiency not only increases passenger comfort but also cuts down travel time. Knowing the potential sea conditions we could face on the infamous Drake Passage, choosing Endurance was a no-brainer.

Endurance also has a Polar Class 5 designation (capable of cruising year-round in the Polar region and cutting through first-year ice), usually reserved for research vessels and patrol ships. A state-of-the-art propulsion and maneuvering system generates a quiet and nearly vibration-free environment, and a dynamic positioning system eliminates the need to drop anchors in sensitive waters. In short, it is the perfect ship for Antarctica.

Best of all, the ship is virtually brand new, as it was delivered in March 2020, days before the pandemic halted all cruising. Its interior is Scandinavia-inspired, with a minimalist design and neutral hues. As such, the staterooms and public areas are highly functional, uncluttered, and appealing to the eye.

We took meals in 270˚ restaurant, named for its wraparound views. Lectures and briefings are held in the Ice Lounge, with seating arranged in a circular format and plenty of TV monitors for unobstructed views. On the top deck is The Den, housing a second eatery and an observation lounge with a well-stocked library.

Other facilities include a gift shop, an oceanview sauna, a fitness center, and a yoga/stretch room. Outside, a wraparound deck provides plenty of space for scenery viewing. Two infinity-style whirlpools are located aft, but the neatest element is the two igloos that flank the pools. By day, they are a quiet retreat to lounge in and watch the views. By night, they are transformed into cozy sleeping quarters, available for guests (by reservation) to spend the night at no charge.

Do not go on an expedition expecting to sleep in! Wake-up calls were usually between 7 and 8, and up to two expedition landings a day were scheduled for after breakfast and lunch. Tea time was at 4, followed by a recap/briefing in the early evening, and dinner was at 7. Although the bar stayed open late and all beverages are included, everyone was usually off to bed early to rest up for the next busy day.

On sea days, enrichment lectures filled the agenda. Topics included the destinations we will visit, geology, whales, seabirds, and of course, penguins. Our photo instructor and Nat Geo photographer held several workshops to provide photo tips, and the dive team shared their undersea discoveries. Special focus was placed on conservation efforts and creating awareness of how our daily actions can affect the oceans that support all life on the planet.

Endurance carries 14 zodiacs in its belly and can quickly deploy them with a hydraulic lift. With the Antarctica regulation allowing only 100 guests ashore at any given time, landings are split into two groups, swapping between exploring ashore and zodiac cruising.

It’s important to note that the entire expedition itinerary is weather dependent. Too much wind or high surf will make zodiac landings unsafe. Ice conditions, fog, and rain (or snow) can all wreak havoc on the best-laid plans. Once, our kayaking excursion was canceled moments before we were to step off the ship due to winds that suddenly appeared from nowhere. On several other occasions, our chosen landing site was unreachable due to high surf, but with Lindblad’s experience and knowledge of the surrounding area, the expedition team and the Captain quickly charted a course to an alternate landing site, thus saving the day.

Crossing the Drake is a Rite of Passage

Travelers earn the right to visit Antarctica by crossing the 500-mile Drake Passage, the most treacherous body of water in the world. Depending on your luck, you may encounter the Drake Shake or the Drake Lake. Luckily, we experienced the latter, with seas of less than 10 feet (our Captain said he has seen 40-foot seas).

Nonetheless, with Endurance being less than 13,000 gross registered tons, we still felt the motion of the ocean. But thanks to the X-bow for eliminating the slamming, the ride was much more bearable. With its cutting-edge design, Endurance crossed the Drake Passage in under 36 hours, whereas a standard-bow vessel would take two full days.

Our five days around the Peninsula were spent in the Weddell Sea. Our landings included shore walks, hikes, visits to Adelie and Gentoo penguin colonies, and zodiac cruising. Endurance can park itself on the sea ice, offering the opportunity for ice walks.

While doing so off the coast of Snow Hill Island, five emperor penguins appeared on the horizon, and they quickly came to investigate the strange orange-clad, camera-clicking visitors. Emperor penguins establish their colony miles inland and only come to the ice edge to feed, so sightings are purely by chance. All of us were overjoyed that our impeccable timing afforded us this memorable close encounter.

After leaving the Peninsula, we spent two days in the South Orkney Islands, visiting chinstrap and macaroni penguins. It was here that we crossed paths with the world’s largest iceberg. A-76A is an 84-mile long by 16-mile wide behemoth, part of the original berg that broke off the Antarctica ice shelf in May 2021. We cruised alongside it for more than an hour to view this extraordinary phenomenon, capturing another special moment with our cameras.

To travel to Antarctica and not include South Georgia in the itinerary is like visiting Kenya and not going on a safari. Although this extends the expedition to 20+ days, the time and the extra cost are well worth it, as you will spend quality time on an island that hosts the world’s greatest concentration of marine mammals and seabirds. According to our naturalists, the numbers are staggering: 450,000 pairs of king penguins, 500,000 elephant seals, and possibly over 80 million seabirds (and these are stats from 2002!).

In our five days there, we landed on beaches so teeming with penguins and seals that we were almost tripping over them. The photo ops were incredible, and we spent hours amidst the bustling action, listening to the cacophony of calls and snorts from the seals and watching the antics of the penguins and their fluffy chicks.

South Georgia is also Ernest Shackleton’s final resting place, and we visited his grave at Grytviken, a former whaling station. A few buildings of this once bustling complex have been restored, housing a post office and a museum depicting the exploitative industry that nearly decimated South Georgia’s whale population.

Savor the Vast and Wild Landscapes of the Falkland Islands

On the first of our three days in the Falklands, we visited the capital Stanley - the only true port of call on our entire expedition. It’s a quiet seaside town with a maritime museum and monuments commemorating the Falklands War of 1982.

We spent the rest of our time on the windswept West Falklands, visiting our final penguin species – the Rockhopper and the Magellanic, abandoned British missionary settlements, and hiking in the hills. Here, Lindblad gave us another exclusive experience: a visit to a farm owned and operated by our expedition leader’s family. We were free to roam the property and watched a sheep-shearing demonstration (performed by our expedition leader himself) before enjoying a barbeque of the freshest farm-raised organic lamb and beef. It was indeed a privilege as this opportunity is only available on expeditions led by this individual.

Another highlight was a hike to the world’s largest black-browed albatross colony at over 120,000 pairs. Weaving our way through a maze of 7-foot tall tussac grass to reach the colony edge, we are rewarded with views of the elegant nesting birds as far as the eye can see.

And just like that, 21 days sped past in a flash. As Endurance sailed towards Ushuaia, it was time to pack and reflect on everything I had seen and done. With fine weather, smooth seas, and incredible wildlife experiences, Lindblad Expeditions left me with nothing more to desire. Except perhaps to return one day and march along the penguins again.