You may also like
Dismiss
Live From MSC Cruises' MSC Grandiosa: What's it Like Sailing on a Big Ship in the COVID Era?
Cruising the Newest Ship Afloat: Live From Celebrity Apex
7 Highlights From a Week Onboard Celebrity Apex
Live From Royal Caribbean's Odyssey of the Seas: Why You'll Never Be Bored on This Cruise Ship
Emerald Cruises Officially Launches in Australia
MSC Cruises Extends Seasons of MSC Virtuosa Cruise Ship in the UK, MSC Bellissima in Dubai
The Biggest Cruise Ship in the World, Wonder of the Seas, Has Arrived in Florida
NCL Reveals More Dining, Design Details on New Cruise Ships Norwegian Prima and Norwegian Viva
Just Back From Allure of The Seas' Maiden Galveston Sailing: Hits and Misses 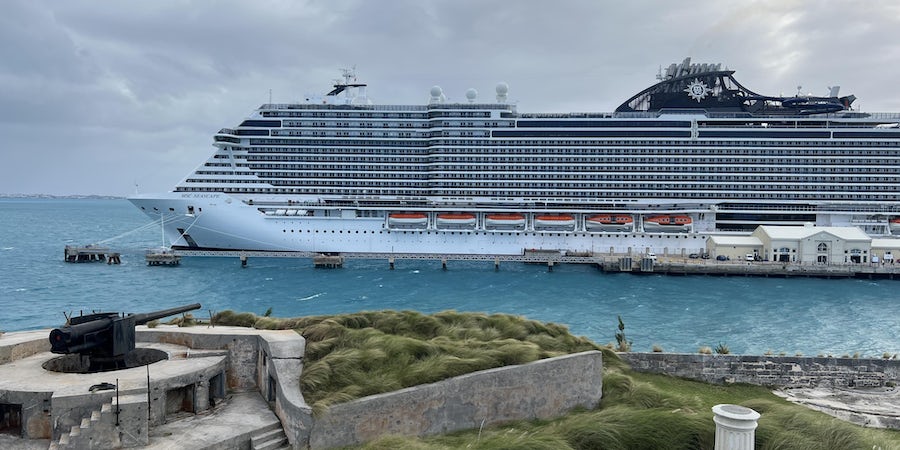 MSC Cruises' newest cruise ship, MSC Seascape, sailed into New York harbor this week after a successful transatlantic crossing. And, as Cruise Critic has discovered, there is a lot to like about this European-minded megaship.

MSC Seascape is the latest evolution of the line's Seaside-class ships MSC Seaside and MSC Seaview that first debuted in 2017. In 2021, MSC Cruises revamped its Seaside class of ships with the launch of MSC Seashore, the first of what MSC calls its "EVO-class" vessels. As the name suggests, EVO represented an evolution for the line over the previous Seaside-class, with redesigned public spaces, better passenger-to-space ratios, and newer, more environmentally-friendly systems onboard.

We sailed on the tail end of Seascape's transatlantic maiden voyage -- a short segment from Bermuda to New York City -- on the way to the ship's naming ceremony in the Big Apple.

Here are our first impressions of MSC Seascape.

One notable difference on MSC Seascape is the presence of the brand new Robotron. This thrill ride on Deck 20 consists of a robotic arm that spins passengers in all directions at 175 feet above the sea and is billed as the first robotic coaster at sea. Regrettably, the mechanical joyride remained dormant during the segment of our sailing, so we were unable to experience it on our short crossing.

Other differences are far more subtle and cosmetic in nature. For example, the color scheme of MSC Seascape's Chora Theatre is red and grey as opposed to MSC Seashore's black and grey, but the style of the decoration remains unchanged. Some public room names are also different; for instance, the three restaurants on the main dining room are now called The Green Wave, Cala Jondal and Aegean instead of MSC Seashore's New York-centric names like Central Park, Tribeca and Fifth Avenue. Their décor has also been updated to reflect the theme of their new names. Similarly, all the decks on MSC Seascape are named after famous islands like Bali, Gozo, Mykonos, Maui or Cozumel.

Beyond those differences, you will find the same attractions and public spaces on both Seascape and Seashore: Pirate's Cove Water Park, the Jungle Pool, Aurea Spa, Doremi Lounge, Hall of Games, The Atrium, and Marketplace Buffet & Restaurant, to name a few -- not to metion the luxurious MSC Yacht Club, MSC's luxury ship-within-a-ship concept.

The MSC Yacht Club is as Impressive as Ever, and Bigger

On MSC Seascape, the crown jewel of MSC continues to be its exclusive MSC Yacht Club. The ship-within-a-ship concept isn't new nor exclusive to MSC, but its comprehensive amenities, spacious accommodations and attractive price point have made it a clear standout among similar complexes on other cruise lines. In fact, MSC Yacht Club was recently announced as the winner of Cruise Critic's 2022 Editors' Picks Award for Best Suite Complex.

And the MSC Yacht Club on board MSC Seascape is the cruise line's largest yet, with 131 cabins spread across decks 16-20 on the forward of the ship (of note: there is no Deck 17, as Italian tradition considers this an unlucky number, much like the number 13 is taboo in the US). Aside from the cabins, the MSC Yacht Club features a dedicated pool, solarium, lounge and a private restaurant.

We stayed on one of the Yacht Club Deluxe Suites on Capri Deck 18. At 270 square feet, plus an 86-square-foot balcony, these suites are more than comfortable. They are also the most abundant type accommodation in the MSC Yacht Club, which also features Grand, Royal and Owner's suites, along with interior cabins that represent some of the best value onboard.

With a large ship like MSC Seascape, the VIP treatment afforded by the MSC Yacht Club makes a world of difference. Our sailing had 3,065 guests; while not close to full capacity, it was enough for the ship to feel crowded at times. Having the luxury of enjoying the sailing in your very own penthouse-like spot was priceless.

And speaking of crowds, one particularly useful perk is that scanning your Yacht Club key card when calling for an elevator anywhere on the ship will give you an express ride bypassing any other deck on the way to your destination.

Passengers sailing on MSC Seascape are spoiled for choice when it comes to enjoying food and beverages. The ship offers 11 dining venues (counting the aforementioned option in the MSC Yacht Club), and 20 bars and lounges.

The restaurants included in the cruise fare are the buffet-style Marketplace on Deck 16 and the three-level main dining room, comprised of Aegean (Deck 7 - Mykonos), Cala Jondal (Deck 6 - Ibiza) and The Green Wave (Deck 5 - Ilhabela).

Despite having different names and different decoration styles, the three restaurants in the main dining area offer the same menu. Breaking up the main dining room into individual restaurants goes a long way in maintaining good crowd control, as passengers are assigned one of the three specific restaurants throughout their voyage. But the regulation isn't strict by any means. You are welcome to try forego your assigned seating to try a different restaurant as a walk-in option.

There is a fourth restaurant on Deck 8 tied to the main dining experience called the Skyline Restaurant. However, it is exclusive to passengers who book an Aurea-level cabin (which is the highest level of inclusivity outside of the dedicated MSC Yacht Club rooms and suites).

The Marketplace Buffet & Restaurant is the regular choice for breakfast, lunch and dinner on any given day. It takes up more than half of Deck 19, so space is plentiful, and lines were never too long during our sailing. The Marketplace also features a look reminiscent of a Parisian bistro.

During our short time aboard, we sampled all five specialty restaurants: Kaito Sushi, Kaito Teppanyaki, HOLA! Tacos & Cantina, Ocean Cay and Butcher's Cut. As expected from eateries that require an additional fee, the food and service in these restaurants was noticeably superior.

Although reservations were required (and we found it best to have your butler manage the reservation for you if you're staying in the MSC Yacht Club; otherwise, you can use the MSC For Me app), we never had an issue securing a table, even when booking on the same day.

On our sailing, we especially enjoyed the steakhouse Butcher's Cut, which is also the most spacious of all the specialty restaurants, as well as the seafood restaurant Ocean Cay. But in truth, all five provided excellent experiences and choosing a favorite really does come down to your personal preferences.

Entertainment Aboard MSC Seascape Delivers, but Shows are Hit or Miss

Entertainment is abundant throughout MSC Seascape, with live music, dueling pianos, and stage shows going on well into the deep hours of the night. The options are also distributed adequately, with three main venues offering the lion's share of the ship's entertainment: Le Cabaret Rouge, Chora Theatre and the Atrium.

The four-story Atrium, effectively the heart of the ship, is a continuous hotbed of entertainment, featuring live music and ensuring surrounding bars and lounges attracted a steady flow of visitors.

The 400-seat Le Cabaret Rouge is a fun, intimate venue, modeled after Paris' Moulin Rouge. Bar service was supremely efficient and there's not a bad seat in the house.

Performances in Le Cabaret Rouge, however, were hit or miss. MSC's daily program mentioned that the venue offers a mix of singers, dancers, aerialists, contortionists, special guest entertainers and more every evening from 8 to 11:30 p.m. But on our two visits to Le Cabaret Rouge, we only saw singers and a juggler. Some of the acts belted inspired performances while others relied on routines that felt disengaged and hastily put together.

The ambiance at the Cabaret, however, was always enjoyable. Even during daytime, the venue offers a cozy space to enjoy a drink, a game of cards or a good book.

We had a similar experience at Chora Theatre, the 1,200-seat located on Decks 6 and 7 at the front of the ship. The venue itself is charming, with minimalist décor reminiscent of a Greek amphitheater, and feels more intimate than your average large cruise ship theater.

The 35-minute musical ImaginOcean featured a competent cast of performers, including gymnasts, dancers and singers. But the storyline was difficult to follow, and at times downright puzzling. It was led by widely recognizable 80s hits from artists like Bon Jovi, Pat Benatar, The Police and Bonnie Tyler, that bore little to no resemblance to the nautical theme of the musical. Moreover, the second-rate marine-inspired graphics further distracted from the cast's skilled performance.

Having said that, whether at Le Cabaret Rouge, Chora Theater, The Atrium or anywhere else where live music was performed, the response from our fellow passengers was steadily enthusiastic. It was not uncommon to see couples dancing to the beat of any songs that live bands performed at the Atrium or populating Le Cabaret Rouge's dance floor with earnest gusto.

International Appeal is at the Core of MSC Seascape

It's no secret that MSC's Seashore EVO-class ships are meant to attract American passengers. This is not only evident from the not-too-subtle nods to New York City -- including a 10-foot-tall replica of the Statue of Liberty and a shopping/entertainment area named Times Square.

Yet MSC continues to consistently attract a very diverse audience, and English (and especially American English) was a distant fourth most spoken language, behind Italian, Spanish, French. To be fair, our transatlantic sailing originated in Rome (Civitavecchia) as a 17-day transatlantic crossing, so it stands to reason that most our fellow guests hailed from Europe.

Additionally, we noticed that the Americana motifs and entertainment options, while sometimes dated, appealed strongly to our fellow European passenger who had no issues seamlessly adapting the ship's public spaces to their back-home comforts.

Following its christening in New York, MSC Seascape will homeport in Miami, from where it's scheduled to sail Eastern and Western Caribbean voyages. This might skew the passenger balance to a higher proportion of North American guests on future sailings, but the appeal of MSC to international cruisers is undeniable, and an essential ingredient of its identity and charm onboard the new MSC Seascape.