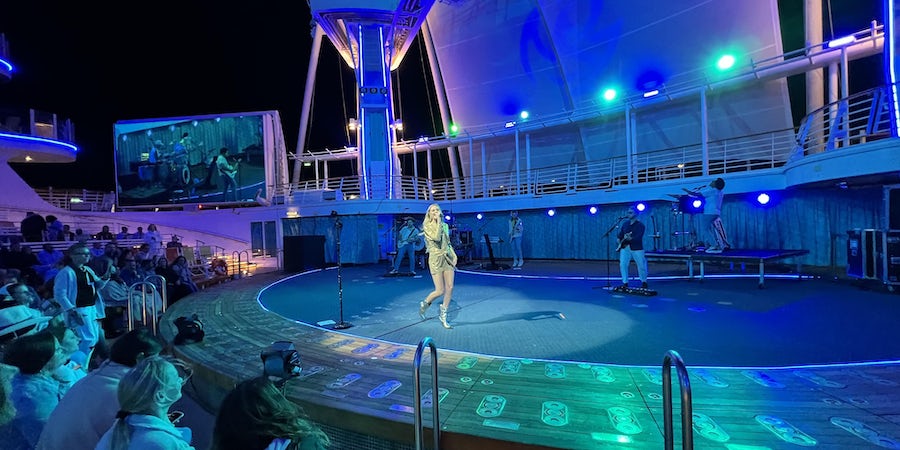 Kelsea Ballerini performs at the Aquatheater aboard Allure of the Seas (Photo: Jorge Oliver)

Just Back From Allure of The Seas' Maiden Galveston Sailing: Hits and Misses

Kelsea Ballerini performs at the Aquatheater aboard Allure of the Seas (Photo: Jorge Oliver)

You've probably heard the superlative stereotype that everything is bigger in Texas. And with Allure of the Seas homeporting at Royal Caribbean's new Terminal 3, the Port of Galveston finally has a Texas-sized ship to call its own.

The 225,282-gross-ton vessel -- the world's fifth largest cruise ship only behind sister Oasis-class ships Wonder of the Seas, Symphony of the Seas, Harmony of the Seas and Oasis of the Seas -- is calling the Texan port home from November 2022 to October 2023. The next largest ship currently homeported in Galveston is the 143,535-gross-ton Norwegian Prima, although starting in late 2023, the port will be home to the 183,200-gross-ton Carnival Jubilee.

Figuratively and literally, the presence of Allure of the Seas in Galveston is a big deal. The cruise line's brand-new, 161,334-square-foot Terminal 3 is expected to welcome an additional 630,000 passengers a year to the Texan port -- the lion's share embarking on the Oasis-class vessel.

We sailed aboard the maiden voyage of Allure of the Seas from Galveston -- a 4-night cruise to Cozumel and back specifically arranged for media and travel advisors -- to get a taste of Royal Caribbean's big new splash in Texas.

Hits from the Biggest Ship to Homeport in Galveston

Royal Caribbean president and CEO Michael Bailey made no secret of Terminal 3's mission during the building's inauguration: "We could only bring an Oasis-class ship to Texas because we did build the terminal."

But the new terminal -- which sits on Pier 10 at the port's easternmost end -- is more than just a necessary step to board Allure of the Seas. The building is touted for its zero-energy designation, generating 100% of the energy it needs through onsite solar panels.

But it's the ease of breezing through the terminal that really stood out for us. In no more than 10 minutes, we made our way from the front door of the terminal to the gangway. And although there were roughly 3,500 passengers making their way to the ship, the spacious terminal never felt crowded.

When our cruise ended, disembarkation proved to be even smoother. The terminal uses facial recognition technology to speed up the passport verification procedure, making the whole ordeal easier than a Texas two-step.

The 'Texasification' of Allure of the Seas

As an homage to its new home in Texas, Royal Caribbean set out to bring the Lone Star State on board Allure by featured a series of onboard nods to the state's culture. And short of slapping on a couple of ten-gallon hats on the ship's funnel, the cruise line succeeded at providing a tastefully noticeable Texas flair to our sailing.

Live country bands were peppered throughout many of the ship's public areas, including the Royal Promenade and The Boardwalk, while on the last night of the cruise we were treated to a one-off live performance by country pop singer Kelsea Ballerini on the ship's Aqua Theater.

But it was in the realm of food and beverage options that the state's contributions really shined. Texas-style BBQ was prominently served at the Windjammer Buffet: a feast of brisket, burnt ends, sausage links, corn-on-the-cob, mac n' cheese and more.

In what proved to be a very successful transformation, Royal Caribbean converted Deck 15's Wipeout Café to an El Loco Fresh, serving round-the-clock Mexican and Tex-Mex fare. During our sailing, there was never an idle moment at Wipeout Café, with the buffet-style offerings flying off the trays.

In the drinks department, Texas favorite Shiner Bock beer made a welcome appearance across the ship's bars. The American-style dark lager -- brewed in the tiny town (population: 2,127) of Shiner -- was so highly on demand that by the second night of the cruise it became trickier to track down a bottle (more on that later).

Tito's Handmade Vodka, produced in Austin, is and has been a standard spirit across Royal's fleet. But the lesser-known Balcones whiskey, distilled in Waco, was sourced specifically for Allure's Galveston sailings.

Speaking of Waco, the Central Texas city's biggest claim to fame is arguably Dr. Pepper, which became the soft drink of choice on board the ship. The soda was featured throughout the Coca-Cola-branded self-serve dispensers, which I learned is standard across Royal's fleet, but 2-liter bottles were readily available across the ship's multiple bars.

With a ship as large as Allure, the argument could be made that sea days are a necessity to discover and enjoy the many amenities on board. The ship features 19 restaurants, 13 bars and countless other attractions to keep passengers busy and entertained. Luckily, Allure's itineraries have you covered.

The ship will mostly embark on 7-night Western Caribbean sailings from Galveston. Owing to the location of the Texas port relative to the nearest Western Caribbean destination, this will always mean at least one sea day each way to cross the Gulf of Mexico on the way to the Western Caribbean. In fact, most itineraries will feature three full sea days.

Cruising on Royal Caribbean is not for the FOMO-inclined; the line offers such a consistently wide array of entertainment options that, unless you figure out how to clone yourself, you're bound to miss a thing or two.

And that goes double for our shorter sailing. From the Broadway production of Mamma Mia!, numerous ice shows and Aquatheater water shows, to stand-up comedy, karaoke, live jazz and the impressively on-point Journey cover band DSB (short for 'Don't Stop Believing,'), our voyage was jam-packed with entertainment options that didn't disappoint.

Misses from the Biggest Ship to Homeport in Galveston

The Pros and Cons of Aging

Allure of the Seas debuted in 2010, so the nearly teenaged ship naturally feels a bit dated in places. Royal Caribbean's fleet-wide Windjammer buffet can feel crowded at times, an issue that has been resolved in newer Oasis-class ships like Wonder of the Seas.

Perhaps the most vexing blast from the past is that the cabins are still equipped with iPod docks in lieu of much-needed USB ports.

On the other hand, the ship's age does have its advantages. One area that has benefitted from this maturity is the Central Park neighborhood. After 12 years of gardening, the plants and trees here look noticeably lush, adding to the -ahem- allure of this beloved neighborhood.

The post-COVID hangover felt across the cruise industry has resulted in dips in service and supply chain problems, and Allure of the Seas was no exception. Service was a tad slow on the ship's restaurants, and that includes the premium eateries like Giovanni's Kitchen and 150 Central Park.

Specific products were also hard to come by, like the aforementioned Shiner Bock beer, which admittedly could have been the result of unexpected popularity on our sailing. We also didn't have a chance to sample Texas' Lone Star Cheese, which was going to be offered at specialty restaurants but which became unavailable after the first two nights onboard.

Allure of the Seas Delivers on Texas-Sized Expectations

In the end, Royal Caribbean made the right call in bringing one of its largest ships to Galveston. The convenience of Terminal 3 means boarding Allure of the Seas is a breeze. And despite some very minor quibbles, the ship delivers a great cruise vacation from the Lone Star state.