You may also like
Dismiss
American Queen Steamboat Company to Cruise Mexico, Central America and Alaska
Just Back From a Great Lakes Cruise on Victory I: First Impressions and What's Still to Come
Just Back From MSC Grandiosa: First Impressions of MSC's First Meraviglia Plus Cruise Ship
What It's Like Safari River Cruise Sailing On CroisiEurope's African Dream
American Cruise Lines Aims to Be First to Resume River Cruising in United States
What Europe Being Closed to Americans Means for European River Cruising
Two U.S. Small Ship Lines Resume Cruises This Weekend
Marella Cruises Debuts New Ship, US Itineraries in 2023
Live From Havila Capella: What It's Like On A Havila Voyages Cruise Along the Norwegian Coast
Cruising on the Ohio River: Just Back From American Queen 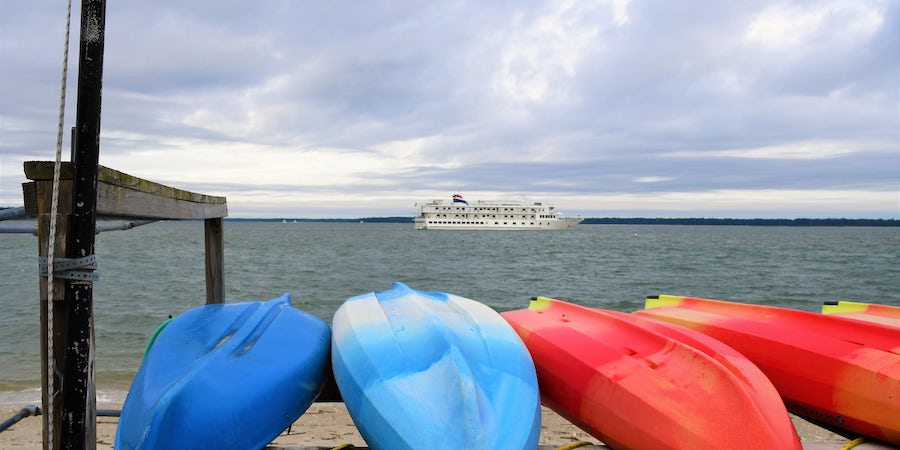 Just Back From American Independence: Sailing The Intracoastal Waterway With American Cruise Lines

Think of cruising and it's more than likely ocean or river sailings spring to mind. However, there's a fascinating and far less-known third option that's waiting to be discovered that is a mix between the two.

The 3,000-mile Intracoastal Waterway (ICW) -- affectionately known as "The Ditch" -- is an inland network of rivers, canals, bays and inlets along the Atlantic and Gulf of Mexico coastlines between Boston, Massachusetts, and Brownsville, Texas. As well as being an important artery for commercial shipping, it provides an opportunity for cruise passengers to visit historic cities and unspoilt wildlife-rich areas.

We sailed aboard American Independence, a 220-foot-long ship carrying 100 passengers and 47 crew.The American-flagged and crewed vessel first launched in 2010 and is fully stabilized for smooth sailing in these coastal waters in spring and fall.

Here are some of our impressions on what you can expect as a "coastal cruiser" on the Intracoastal Waterway with American Cruise Lines, as well as some of the excursions and seven ports visited during the cruise.

Unlike mainstream river cruise vessels -- where nothing goes on during the day when most passengers are out and about on excursions or exploring independently --American Independence offers a bunch of daily activities for folks that choose to stay onboard. On our cruise these included a series of watercolor classes with resident artist John Komisar, with all art materials provided, a talk by the executive chef, knot tying demo, movie screening, games and quizzes.

You can expect plenty of enrichment to bring the destination to life and this was provided by the excellent Robbie Robinson, a retired airline pilot and passionate historian turned lecturer, who gave insightful daily presentations on subjects such as the geography of the region, rice growing in Carolina and Civil War history.

Most memorably, his talk on the lives of confederate soldiers was enhanced by items from his collection of memorabilia including antique clothing and equipment that passengers could touch and try on. This is one cruise where you might be torn between going ashore or staying onboard so as not to miss out some of the experiences. But it was a pleasant surprise and great to have so much choice.

There is a "Sea Day"

Another big difference from a traditional river cruise, where you visit one or two news places each day and the schedule can get very busy, is the "underway day". This section between Brunswick and Savannah was akin to an ocean sailing with a full day to relax onboard, enjoy leisurely mealtimes, participate in the day's program, read a book or simply take it easy in the lounge or out on deck with a coffee or cocktail. We really appreciated this chillout day.

Wildlife is Abundant So Take Your Binoculars and Camera

The route follows a twisting course flanked by barrier islands and tidal marshes that are rich in birdlife. Flocks of pelicans and gulls follow the boat to dive for shrimp and fish in the wake of the vessel which makes for dramatic photos. Cormorants perch on marker posts along the channel and you'll spot herons and other species along the way.

Several excursions are themed around wildlife, including a trip to the Sea Turtle Center on Jekyll Island, where sick and injured turtles are treated and rehabilitated, and a small boat tour on the freshwater lakes of the 600-acre Sea Pines Resort Forest Preserve at Hilton Head. Everyone that took the trip saw alligators and turtles. The most novel trip, and one of the most unusual we have done on a small ship sailing, is an afternoon on the Lady Jane off St Simons Island. The retired shrimping vessel has been adapted to carry passengers and during the trip there are three "drags" and a conservationist talks about the marine life pulled up in the nets. On our trip this included shrimps, blue and horseshoe crabs, puffer fish and rays. Afterwards all the creatures are returned to the water.

You Get a Multitude of Ways to See Cultural Cities

Notable town and city stops along the way include Savannah, Beaufort and Charleston. We were impressed by the choice of excursions -- several included and the majority for-fee -- at each port of call. They are graded as low, moderate or high in difficulty level and many are wheelchair and scooter accessible, so nobody misses out.

There were five alone in Savannah, including a trolley bus tour, Civil War walking exploration and an atmospheric night-time stroll when the city is lit by gas lamps. Other shore excursions on the itinerary took in plantations, a fort and movie-themed walk. Guides throughout were knowledgeable and well-versed on their subjects.

Everything Except Premium Excursions is Included

This is a cruise where you don't need to worry about ending up with a huge bill at the end. Although American Cruise Lines fares are more expensive than, for example, a mainstream European river cruise they include a high number of inclusions, including all drinks, meals and snacks and -- particularly noteworthy for an American line -- gratuities.

American Independence is a homely and welcoming ship and crew go out of their way to make passengers feel welcome and look after their needs. American Cruise Lines does attract an older clientele (including many in their 80s and above that have sailed with the line for years) and staff really look out for them and provide a helping hand to fetch canes and help with seating if needed.

A twice daily treat is the morning and afternoon cookie time and instead of just setting out the cookies in the main lounge with other snacks a member of the waitstaff walks around the ship and hands them out. A nice touch.

Is There Anything To Be Aware Of on American Independence?

The choice of courses at lunch and dinner is not as plentiful as some lines -- three lunch entrees followed by a choice of dessert or ice cream (or a combination of the two) then two dinner appetizers, three entrees and two desserts or ice cream. You also need to make your lunch and dinner choice at breakfast (albeit that's not set in stone and you can change your mind and get something else when the time comes). Once you get used to the system you certainly won't go hungry as there are snacks freely available throughout the day and generous canapes during the evening cocktail hour.

American Independence and its sister ships in the region provide a very friendly and comfortable small ship experience -- with no formal nights or dress code -- and offer a great way to explore a stretch of water you might never have heard of.