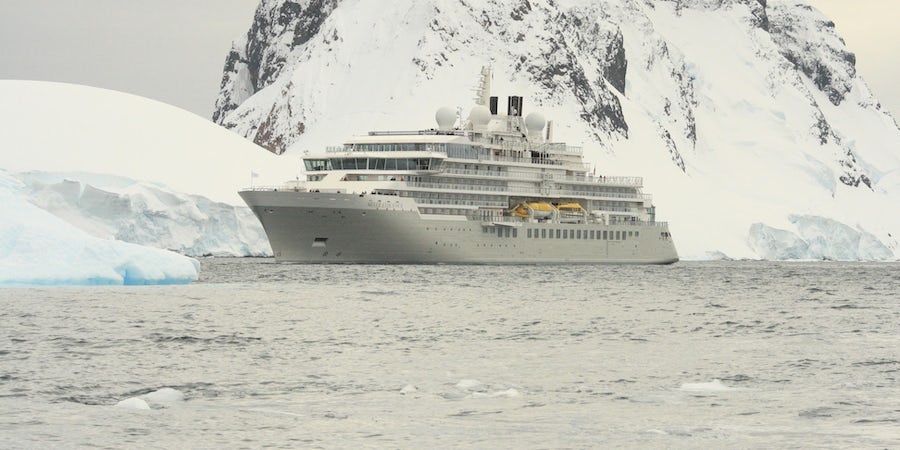 Silver Endeavour in the Lemaire Channel (Photo by Adam Coulter)

Just Back From Silver Endeavour: A Fly-Cruise to Antarctica on Silversea's New Expedition Ship

Silver Endeavour in the Lemaire Channel (Photo by Adam Coulter)

Although the ship itself is just over a year old, Silversea has refurbished Silver Endeavour's suites, giving them the line's signature understated luxurious feel -- greys and beiges -- as well as changing the restaurants, bars and some public areas to better reflect the Silversea brand.

Crystal-branded signage has been removed, as has the ship's former helicopter and submersible, freeing up space for further structural changes still to come (see below).

(The line also added the "u" to "Endeavour," in keeping with its use of British spelling and as a nod to Captain Cook's original HMS Endeavour).

However, as a result of this part-refurb -- and as Silversea executives freely admit -- the ship feels like a bit of a hybrid of Crystal and Silversea.

We joined Silver Endeavour on a six-day voyage to Antarctica, which included the ship's extraordinary christening in the Lemaire Channel -- here's our take on what worked -- and what didn't.

More Changes Still to Come for Silver Endeavour in Spring 2023

Silver Endeavour doesn't feel quite finished, mainly because it isn't. There's no question this is a stunning ship, with so many beautiful spaces, and honestly, if you weren't looking you likely wouldn't see those Crystal touches.

However, there is a lot of work planned for the month-long drydock in April 2023, and this will no doubt turn it into the luxury polar expedition ship Silversea envisages.

The biggest of these changes involves developing the vast space on Deck 8 which once housed the Endeavor helicopter, and also the Meeting Room.

This area will be given over to top suites, though it has not yet been decided at what level these will be, though we're told they'll come in below Owner's and Grand Suites but above the regular suites.

The ship's medical center, currently on Deck 5, will move to the space once occupied by the casino and the old medical center space will become four more suites.

This takes the ship to 220 passenger capacity, which changes the 1:1 guest:crew ratio and also could prove challenging for excursions in Antarctica, which is governed by IAATO regulations limiting the number of passengers ashore at a given time to just 100.

Other structural changes coming to Silver Endeavour include redesigning the Explorer Lounge on Deck 4 to allow for more seating; and deciding what to do with the former Teppanyaki space in La Dame (formerly Crystal Cruises' Nobu dining venue).

Minor changes include fixing the drying cupboards in suites, fixing the shower doors (which don't close properly), the motion-sensor wardrobe light (which goes on in the middle of the night); and replacing the sliding wardrobe doors.

The ship also has some less immediately fixable issues such as incessant creaking in some cabins (most noticeable as the ship flexes while crossing the Drake Passage).

Then there is the Pool Grill, which for our money is one of the most structurally stunning spaces we have seen on a ship this size.

However, it is also problematic as it is a restaurant/swimming pool area, and as a result people feel self-conscious swimming here, being stared at by diners.

There are no immediate plans on what to do with this area (if any), but the proximity of the spa would lend it itself to a spa extension.

Service on our Antarctica expedition varied onboard, to such an extent that we chose specific venues because they were so much better than others.

The Restaurant, which is effectively the main dining room onboard, had wait times between courses of up to 45 minutes, with some waiters seemingly distracted while others were on the ball.

(Editor's note: This was a shakedown cruise, which as the name implies, means things are bedding in. We have no doubt these issues will be resolved).

The contrast with the Pool Grill is noticeable, where Maitre'd Igor was always attentive, as was his well-trained staff.

It was a similar story at Il Terrazzino, the ship's smaller version of the classic ship's La Terrazza, with long wait times.

We can't speak for the French-themed La Dame specialty restaurant, as we did not eat in there, though passengers who did said that service was good.

Food Is Not Yet Consistent on Silver Endeavour

Silversea places a huge emphasis on food, so much so that the line launched its stunning S.A.L.T. (Sea And Land Taste) program as one of its culinary pillars.

That did not translate onto Silver Endeavour, where we were disappointed by the quality of cuisine in a number of venues, most noticeably The Restaurant.

Perhaps it's the loss of Executive Chef Rudi Scholdis, who has since moved to Santiago, Chile, to open his own restaurant (and fed us on two land nights, with outstanding meals), but few meals really hit the mark.

A steak in the Pool Grill was overdone, the Chilean seabass in Il Terrazzino was glassy and tepid and the pork ribs in The Restaurant were tough.

On the other hand, the dish of the day in the Pool Grill (usually a curry) was consistently excellent, as were the grab and go snacks in the Arts Café and the daily sushi served in the Pool Grill and The Restaurant.

To be fair, this is Antarctica and the very fact that we can be served a wide variety of food in one of the most remote places on the planet is astonishing.

The Expedition Team on Silver Endeavour Are Superb

The Expedition team on Silver Endeavour, led by the incredible Marieke (pictured above in red), were some of the best we have ever had on an expedition cruise.

Deeply professional, knowledgeable, and patient, they ensured that our safety was the absolute priority -- and that we experienced everything that Antarctica has to offer.

From their lectures, to steering the Zodiacs, to their smiling welcomes when we made landfall for the first time, they went out of their way to make sure this was an unforgettable experience.

Silver Endeavour is a beautiful ship, inside and out, and a wonderful vessel in which to travel to Antarctica. Its speed (19 knots) took us across the Drake in record time (36 hours), allowing us to have an excursion on Day 2; it's rated as a Polar Ice Class 6 vessel, designed to cut through meter-thick ice floes, and it has azipod propulsion units, making it even more of a smooth crossing, as these podded propellers tend to reduce vibration and noise compared to ships driven by traditional shaft-mounted propellers.

It also has a dynamic positioning system, allowing it to stay in one position without dropping anchor and to "turn on a dime", as Captain Niklas demonstrated in the Lemaire Channel ahead of the christening.

Inside, the public spaces such as the Pool Grill dazzle; as does the gorgeous Observation Lounge, library, science room and studio. Suites are sumptuous, and we love how the Silver Suite beds face the window.

There are just a few areas to work out, but we have no doubt service and food will bed in and improve as the season progresses and we can't wait to see what the ship will be like post-drydock in May.