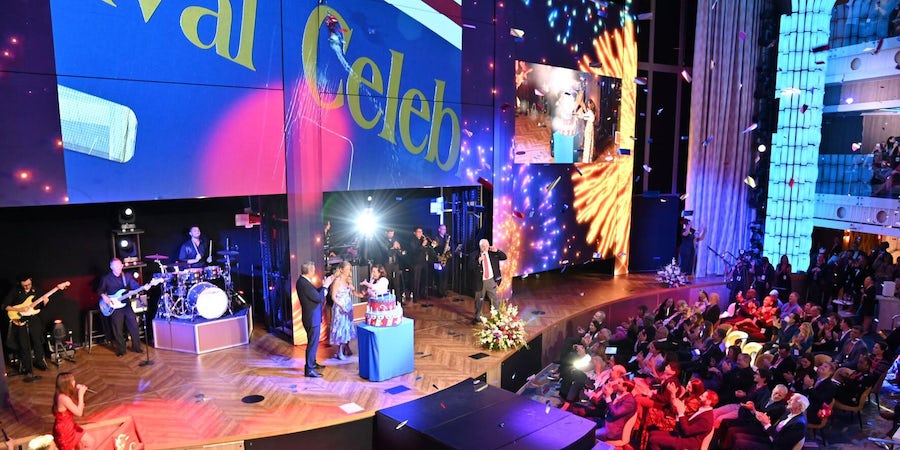 Boasting a maximum capacity for 6,500 passengers, the 180,000-gross-ton ship is the largest in Carnival's fleet, as well as the first LNG-powered ship based in Miami. It’s the second of the line’s Excel class, following Carnival Mardi Gras, which debuted last year.

Terminal F in Miami is Carnival’s Largest in Florida

The festive evening kicked off with the inauguration of Carnival's enhanced and expanded Terminal F. At approximately 230,000 square feet and spread over three levels, Terminal F is Carnival's third terminal at PortMiami, and the cruise line's largest in South Florida.

With Carnival Celebration, the cruise line will now have five ships homeported in PortMiami, welcoming approximately 20,000 passengers each week.

"What you see is a beautifully enhanced and significantly expanded terminal that we know will quickly become a guest favorite," said Duffy, adding that the 'F' in the terminal's name stands for 'Fun.'

Highlights of the spacious terminal include the Captain's Lounge, a waiting area that can accommodate up to 500 passengers. Digital media experiences have also been built into all three levels of Terminal F, including an immersive tunnel on level two that guests will pass through. The digital screens showcase images of the ship, destinations, underwater seascapes, and the nighttime sky. Terminal F is also slated to be shore-power ready in 2023, one of the first cruise terminals to boast this distinction.

"The moment our guests set foot on the embarkation terminal is when they're effectively crossing the threshold towards happiness," added Weinstein. "Starting tomorrow, I'm pleased that this will happen in our beautiful Terminal F, bringing smiles to our guests as they prepare to board our flagship Carnival Celebration."

The ship's first voyage departs today; a six-day Thanksgiving cruise, with visits to Grand Turk, Amber Cove in the Dominican Republic and Nassau. Starting Nov. 27, the ship will begin a rotation of week-long Eastern and Western Caribbean sailings that depart every Sunday.

Carnival Celebration's Naming Ceremony Lives Up to its Name

From Terminal F, the jamboree continued onboard Carnival Celebration, specifically at the ship's Celebration Central stage on Deck 6.

Actress Cassidy Gifford -- daughter of TV personality, actress and singer Kathy Lee Gifford --  blessed the vessel as its godmother, taking on the same role that her mother had fulfilled in 1987 as godmother of the original M/S Celebration.

"So many of my childhood memories were on Carnival ships but when we boarded today it was like a goosebumps moment. Everything was always incredible and now it's just above and beyond," said Cassidy.

"I started triggering when I was looking at the port again and thinking how Cassidy and her brother Cody grew up on these ships, so this is very special. We're really honored; Carnival never forgot me!," said Kathy Lee Griffin, before passing the torch to her daughter and adding, "It's all yours baby!"

Carnival Celebration is Divided into Six Zones, Including Three New Ones

Located midship, Celebration Central is one of the three new Zones (or themed areas) found on board the ship, along with Biscayne 820 and The Gateway. Aside from the three-deck Center Stage, other highlights of this Celebration Central include the nostalgia-tinged Tropicale Bar, the ocean-themed Aquaria Bar, JavaBlue Café, Bonsai Sushi, Bonsai Teppanyaki, Piano Bar 88 and The Punchliner Comedy Club, among other venues.

Located on Deck 8, 820 Biscayne is an homage to Carnival Cruise Line's original address in Miami and is inspired by the city's Art Deco architecture and tropical cuisine, with venues like Bar 820, Deco Deli and Miami Slice, along with Carnival mainstays Cucina del Capitano and Rudi's Seagrill.

The Gateway Zone is found midship on Decks 7 and 8, and features a rotating selection of international vistas displayed on the innovative LED windows and ceiling. Here you will also find bars Latitudes and The Golden Jubilee, Emeril Lagasse's Emeril's Bistro 1397 and Alchemy Bar.

The evening followed with another ribbon-cutting ceremony in The Gateway, where Emeril Lagasse's onboard restaurant Emeril's Bistro 1397 is located. The eatery is the celebrity chef's second restaurant at sea, following Emeril's Bistro 1396 which is located onboard Celebration's sister ship Mardi Gras. The celebrity chef officially inaugurated his restaurant -- one of 22 dining venues onboard Celebration.

The third ribbon-cutting of the evening was held mid-ship on Deck 7, next to what is known as 'the Godmother Staircase.' The small ceremony, led by Christine Duffy, Cassidy Gifford and Kathy Lee Gifford, marked the spot on the ship where the godmother's portrait is located.

The final -- and liveliest -- celebration of the evening took place in the ship's Grand Spectrum Theater, where the R&B/soul/funk band Kool & The Gang took the stage to perform an hour-long set. Big hits like 'Jungle Boogie,' 'Ladies' Night' and 'Get Down on It' got the crowd going, culminating in what's arguably Kool & the Gang's most well-known song, as well as the most appropriate song for the evening: 'Celebration'