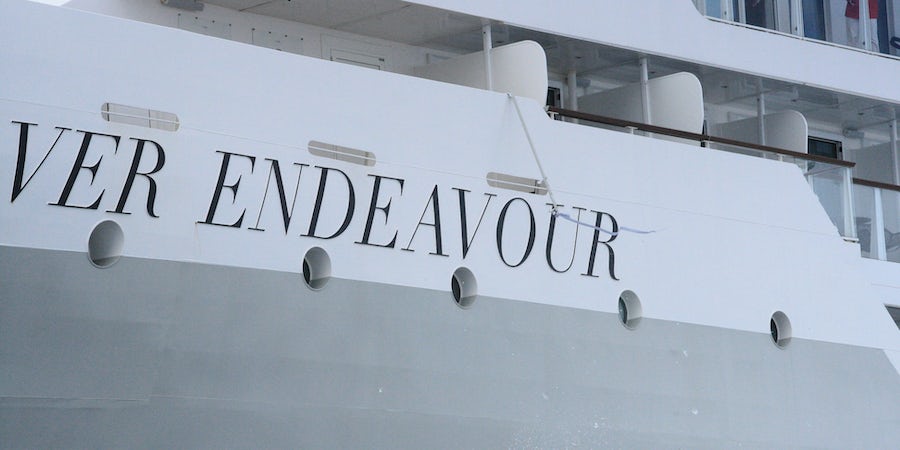 Godmother Felicity Aston, the first woman to ski solo across Antarctica, christened Silver Endeavour in the Lemaire Channel with a specially made bottle of ice, as passengers raised their glasses -- filled with Champagne -- from the boats below.

The event started Monday with a blessing ceremony by a priest in Puerto Williams, followed by a second event Tuesday complete with a Chilean band of highland bagpipers and culminated in Saturday's ceremony.

The ship first debarked passengers onto Zodiacs, which then set off ahead as the ship made its way to the mouth of the Lemaire Channel, named after a Belgian explorer.

Steep-sided, with snow-covered mountains soaring to high peeks, the Channel provided a breathtaking backdrop for the ceremony, which was presided over by Captain Niklas Peterstam.

Silver Endeavour is on a "shakedown" cruise with media, trade partners and invited guests ahead of its first passenger sailing November 21.

Puerto Williams in Chile will be Silversea's New Home Port

The ship set sail from Silversea's new homeport of Puerto Williams, a small town at the southern tip of Chile, which replaces Ushuaia, Argentina, as the line's departure port for Antarctica voyages for two of its ships -- Silver Cloud and Silver Wind, though not Silver Endeavour.

"Ushuaia has just become too crowded," the line's Senior Vice President of Expeditions Conrad Combrink said. "And we have made the decision to move from Ushuaia to Puerto Williams.

"This was a very strategic decision for us because, for many years, companies have looked at Puerto Williams and seen too many barriers.

"Once we started talking to the governor and the local government in Puerto Williams, we realized the willingness of the Chilean government to work with us."

He added: "We will never go back to Ushuaia; all our Antarctic programs operate in this manner out of Puerto Williams."

Silversea has invested significant time and money into Puerto Williams and is the first cruise line to use the dock -- which is owned by the Chilean navy -- commercially.

Silversea also has an exclusive agreement with DAP Antarctic Airways, meaning they are the only cruise line which charter those planes on this route.

Passengers departing Silver Cloud and Silver Wind will leave from a private terminal at Santiago Airport on DAP Antarctic Airways to Puerto Williams, where they will transfer direct to the ship.

Silversea is working with the local authorities to extend the pier, and there are also plans to build a small passenger terminal.

Combrink explained that Puerto Williams is keen to develop cruising further but did not want to become a major cruise hub.

Silver Endeavour Will be Part of Silversea's 'Antarctica Bridge' Program

Silver Endeavour will be based in Antarctica for a month at a time sailing roundtrip from King George Island and using Puerto Williams just for refueling and water.

The ship forms part of Silversea's "Antarctica Bridge" program, which allows passengers to skip the Drake Channel by flying direct from Punta Arenas, another southern Chilean town, and direct to King George Island.

Guests fly from Santiago from the same private terminal to Punta Arenas, where they spend a night before boarding Antarctica Airways to King George Island.

This air bridge cuts out four days of travel across the Drake Passage and means passengers with a limited amount of time can experience Antarctica in just five or six days.

The price point, however, is steep, with the Antarctica Bridge itineraries costing around $5,000 more than a typical nine- or 10-day Antarctica cruise.

However, demand is such that the line has largely sold out for Silver Endeavour's inaugural season, according to U.K. managing director Peter Shanks.

Silversea Will Make Some Structural Changes to Silver Endeavour Next Year

Silver Endeavour began life as Crystal Endeavor and sailed briefly for Crystal in early 2022, before the line shuttered and Silversea acquired expedition ship.

The line has rebranded it and refurbished all the suites but still has some work to do in terms of structural changes, which it will tackle in the ship's drydock in April, confirmed Chief Commercial Officer Barbara Muckermann.

"The ship is beautiful ... and we are not expecting to do any immediate major design changes, but there is some work in terms of the customer experience," she said.

"After the Antarctica season, we will go back to dry dock, and that's when we will make some more significant changes."

These changes include moving the medical center onto Deck 4 behind the Explorer Lounge, where the casino once was, and adding four suites above; and adding six additional top suites on the disused helipad and the Meeting Room.

There are also a few smaller in-suite issues, such as shower doors that don't close properly (butlers are securing them with rubber bands); removing the walk-in closet door and disabling a motion-detector light in the wardrobes.

The vessel was named after British explorer Captain James Cook's research ship HMS Endeavour, and Silversea has returned to the British spelling, in keeping with its brand.