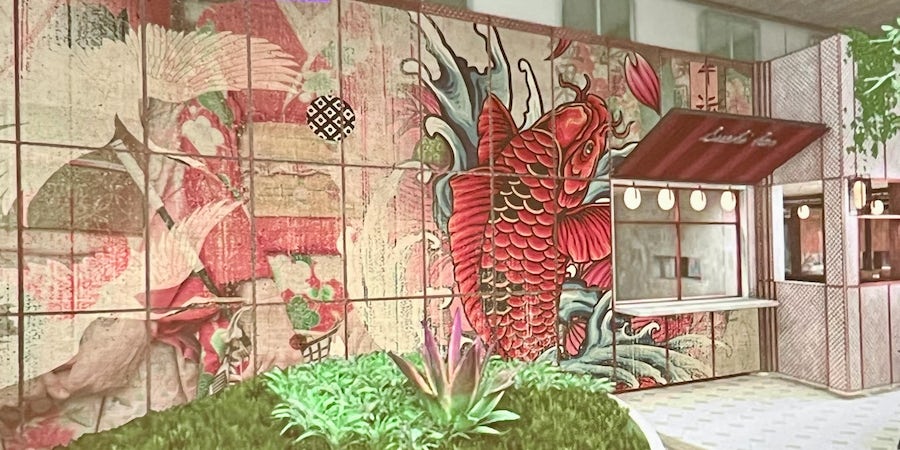 Sushi to Go, Mommy-and-Me Bar and AquaDome's Installation: New Details We Learned About Icon of the Seas

(4:37 p.m. EST) -- Icon of the Seas will offer a sushi "to-go" window, two new-to-Royal Caribbean bars and a neighborhood just for crew, a company executive revealed.

Jay Schneider, senior vice president and chief product innovation officer at Royal Caribbean International, spilled the beans to media (including Cruise Critic) and travel agent partners while onboard Allure of the Seas. He also said the ship will be floated out -- meaning it will touch water for the first time, in December at Meyer Werft shipyard in Turku, Finland.

In May 2023, Icon of the Seas will have its first sea trials, one of the final steps in the process of constructing and deploying a new cruise ship. Conducted by the ship's new captain, the trial is designed to test the major systems of the vessel. The second set of sea trials is scheduled for June 2023, although Schneider noted that these dates are subject to change.

The next milestone is the delivery of the ship, scheduled for late 2023, while the first sailing is set for Jan. 2024.

Icon of the Seas' AquaDome Has Been Installed

Speaking of milestones, Royal Caribbean also shared an update from Meyer Werft's Turku shipyard in the form of a video that shows how Icon of the Seas' new AquaDome was installed. The 363-ton dome is 82 feet tall and 164 feet wide, and features 673 glass panels and 712 aluminum panels, which makes it the largest structure of glass and steel that's been lifted onto a cruise ship. All in all, installation of the dome took more than 80 hours.

The massive dome is the centerpiece of Icon of the Seas' brand new AquaDome neighborhood. The structure will allow 220 degrees of ocean views and will enclose restaurants, bars, lounges and an aqua theater that will feature a 55-foot-tall waterfall.

New Details About Icon of the Seas

Since revealing the look of Icon of the Seas last month, Royal Caribbean has kept other details under wraps. But during Schneider's presentation, he gave away a handful of previously unknown facts about the 250,800 gross-ton ship.

Among the highlights, the executive shared that Asian-inspired restaurant Izumi -- a mainstay across Royal Caribbean's fleets -- will have a new feature in the form of a sushi-to-go window, where passengers can order bento boxes and other menu items. As previously revealed, Izumi will be located in Icon of the Seas' Central Park neighborhood.

Schneider also shared that Central Park will feature two new, unnamed venues. One will be a restaurant and the other will be an entertainment venue. Central Park standards Park Cafe and Trellis Bar are also confirmed on the new ship, as is Royal Caribbean's signature steakhouse Chops Grille.

The ship's Royal Promenade neighborhood will be home to a new bar named 1400. Schneider explained that the name of the bar is an homage to the number assigned to the ship's hull in Meyer Werft's shipyard.

Another new aspect of the Royal Promenade is that the restaurants and venues flanking the thoroughfare will now have open facades, as opposed to the enclosed look they currently feature on Oasis-class and Quantum-class ships. Additionally, the layout of the two-story Promenade will be 360 degrees, eliminating the presence of dead ends found in other ships' Promenade neighborhoods.

The renderings displayed during the presentation also revealed other venues set to be featured in the Promenade, including Sorrentos, Boleros, Giovanni's Italian Table, Spotlight Karaoke and Playmakers Bar.

The Lemon Post Bar, another newly revealed addition to the ship's food and beverages offerings, will be found in the new Surfside neighborhood. Because it will be located in a neighborhood intended for families with children, the Lemon Post Bar will feature a "mommy and me" concept where children can enjoy an alcohol-free version of the adult drinks.

Additionally, Schneider revealed that the ship's crew will have its own Crew Area neighborhood, with reimagined cabins and public areas.