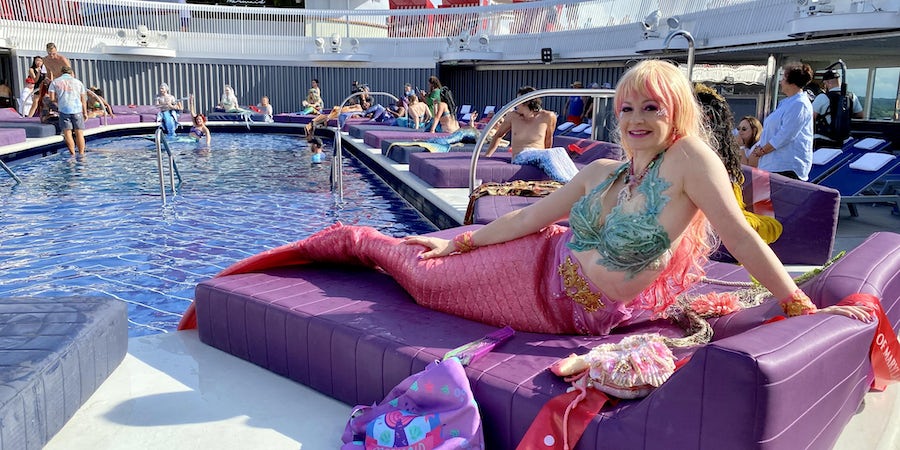 A Tail of a Time: Just Back from Valiant Lady's MerMaiden Voyage From Miami

After a successful summer of sailing through the Mediterranean, Virgin Voyages’ Valiant Lady is now in Miami, marking its new homeport with a MerMaiden Voyage on Oct. 30.

Combining the MerMaiden Voyage with Halloween celebrations, Valiant Lady embarked on her first of many six-night sailings, departing from Miami with stops scheduled in Roatán, Costa Maya, and Bimini. Although a tropical storm diverted the ship from Costa Maya to Cozumel, that didn’t stop sailors from enjoying the special festivities on board.

We were onboard for the celebration, which included a visit from Sir Richard Branson and a successful Guinness World Record attempt to gather the largest number of mermaids in one place. Read on to see what happened.

He does love his ships. Branson, the Virgin Group Founder and brains behind the Virgin Voyages brand, was spotted on various locales around Valiant Lady – taking a dip in the pool, grabbing lunch at Dock House, and even hopping on a rowing machine at the gym. No word if he danced on the outdoor table in the Massive Suite specially designed for that purpose.

Branson also hosted a fireside chat at The Manor, allowing sailors to meet him and ask questions about all things Virgin.

“I wanted to create the kind of cruise line that I would want to go on,” Branson told Cruise Critic and a group of other media members on board. Branson famously had never stepped foot on a cruise ship until the launch of Virgin Voyages in fall 2021.

When asked about why Valiant Lady is identical to her sister ship Scarlet Lady, Virgin Voyages CEO Tom McAlpin chimed in. According to him, the reasons were both economical—engineering costs account for 20% of building a new ship—and practical.

“The physical plan [of the ship] works really well…We think it’s the right spot. Not too big, not too small.” McAlpin said. Virgin Voyages’ upcoming ships, Resilient Lady and Brilliant Lady will also follow the same layout, but McAlpin did hint that future vessels, representing a new class of ships, may have a different look.

Although the look and feel of Valiant Lady is the same as Scarlet Lady, new entertainment was introduced on this second vessel, including the popular variety show, “It’s a Ship Show!” In honor of Halloween, sailors on this particular voyage were treated to a performance by magician and mentalist Marc Spelmann, a semi-finalist on Britain’s Got Talent.

The exclusive perks and activities didn’t stop there. This MerMaiden Voyage also featured a special mermaid pageant with contestants – yes, there are professional mermaids! – from around the world, including Mexico, Bali, and several U.S. states.

The pageant included a showcase of the mermaids and their intricate tails as they took to the pool to introduce themselves and the causes they advocate for. There was even a formal wear competition, and in the end, sailors were able to vote for their favorite mermaid.

The mermaid theme continued as Virgin Voyages also set out to break the Guinness World Record for the largest gathering of people dressed as merpeople. When the ship docked in Bimini, hundreds of sailors headed to Virgin Voyages’ private beach club on Bimini to participate in the record-breaking attempt.

Sailors were provided with mermaid tails and were required to wear them until all the merpeople were in place and the Guinness World Record judge could verify everyone’s outfits. Becoming a mermaid isn’t as simple as slapping on a tail, we discovered. To break the record, sailors were developed into “pods” of 50 or so people, with a crew serving as a “merleader for each pod.” The merleaders helped passengers shimmy into their tails and directed them into place.

The entire process took two hours, as you had to stay as a merperson while judges checked everyone’s costumes. Some sailors were disqualified for not wearing their merperson costumes the entire time, although everyone who sat it out received a certificate for participating (and being part of the fun wasn’t free – people paid $50 to participate). .

Although the line didn’t meet the goal of 500 merpeople, Virgin Voyages still managed to break the previous record of 378 merpeople in one place. According to the Guinness judge, Virgin Voyages’ official tally was 457 merpeople.

Virgin crew members popped champagne as the judge made the announcement and later presented McAlpin with a certificate officially recognizing the successful record-breaking attempt. The celebration continued at the beach club before sailors made their way back to the ship for their final night of sailing.

With a successful MerMaiden Voyage under its belt - tail? - Valiant Lady will spend the winter homeporting at Terminal V, Virgin Voyages’ private terminal at PortMiami. The ship will offer six- and eight-night sailings throughout the Caribbean, including stops at three ports that are new for the cruise line: Roatán, St. Croix, and San Juan, Puerto Rico.

Valiant Lady will remain in Miami until April 22, 2023, when she will head back to Barcelona for another summer of sailing through the Mediterranean.

“It’s been wonderful to see our guests fall in love with sailing the Virgin way, and I’m so proud to welcome our second ship, Valiant Lady, to her winter home in PortMiami,” McAlpin said in a press release. “This is just the beginning for Virgin Voyages, and we have big plans for the future.”