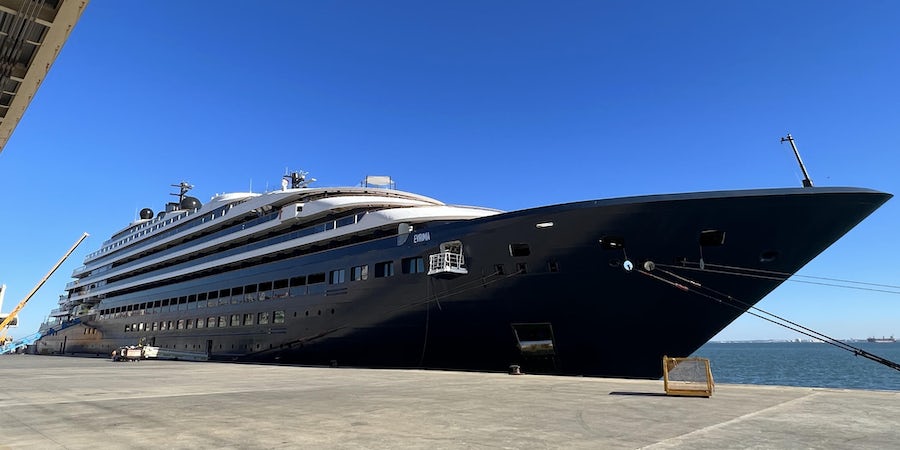 The company’s mission is "to blend the lifestyle of the Ritz-Carlton resorts with the casual freedom of a yachting vacation". And from what we’ve seen on a flying visit to the 298-passenger ship, this mission has been accomplished. There have been a few teething issues since the yacht set sail from Barcelona in October, but once these are ironed out, Evrima looks set to carve its own niche in luxury cruising.

The Ritz-Carlton Yacht Collection is a collaboration between The Ritz-Carlton Hotel Company, part of Marriott International, Oaktree Capital Management, and The Yacht Portfolio, an investment group owned by entrepreneur Douglas Prothero, founder and CEO. Making the move into luxury shipping makes complete sense; Ritz-Carlton not only has its own vast database of wealthy customers to tap into, but those of all the other upscale brands of the Marriott portfolio, from St. Regis to Edition and W.

Some 90 percent of the bookings so far are from customers who have never cruised before -- a figure other luxury lines can only dream of -- and Evrima is sailing almost full (in the suites that are ready, that is).

Passengers are younger, too; Prothero says that on some sailings, the age range is between 35 and 55, again, a market segment coveted by all cruise lines.

Prothero hired Tillberg Design of Sweden, a company with a long pedigree in fitting out luxury ships, to create the interiors, although he’s adamant that Evrima is a "yacht". "It’s the biggest superyacht in the world, not a cruise ship," he says. Like Scenic, SeaDream Yacht Club, and Four Seasons, which is also entering the luxury yacht market, the company seems to want to distance itself from the stigma associated with cruising.

Here are our first impressions from onboard Evrima:

Service Really Is A Winner

According to Prothero, some 50,000 employees across the Marriott group applied for 250 positions on Evrima. Accordingly, the company was able to pick the creme de la creme of its staff. Around half are from hotels and half from luxury cruise lines. Several senior officers on the hotel side of the ship have luxury hotel backgrounds and the sense of enthusiasm they exude is palpable. Waiters and bartenders come across as friendly and confident; there’s none of that slight sense of panic you sometimes feel on a brand-new ship.

Every guest has a Personal Assistant (not to themselves, but still) who acts as a fixer, whether it’s arranging laundry, making restaurant reservations, or setting up experiences ashore. There’s even an art concierge, not to conduct tacky auctions but to talk guests through the collection on board, much of which is for sale, and to give talks on galleries ashore. Passengers on social media forums discussing the first voyage have expressed nothing but praise for the crew.

There’s Not Even A Glimmer Of A Buffet

On Evrima, there really is no buffet. Not even a buffet-like setup with a euphemistic name like "marketplace". Instead, the various restaurants offer breakfast, lunch, and dinner, or just breakfast and lunch, or just dinner, depending on the schedule for the day.

The Pool House is super-casual, right by the pool, with a happy buzz, offering breakfast and then, all afternoon, burgers, wraps, lobster rolls, and poke bowls. Taalat Nam, which has just 80 covers, does Asian fusion that’s easily as good as anything you’d find ashore. We ate in here and the sushi, the satay, the mango salad, beef rendang, and noodles were perfection. Al fresco Mistral does classy, casual Mediterranean-inspired lunches and dinners, with almost all seafood locally sourced.

The Evrima Room, the main dining room, has a more elegant feel. Passengers clearly aren’t shy about spending money; there’s a private dining room to one side of the Evrima Room which can be taken for a dinner party and the night before we were on board, a group of 10 had asked for a truffle-themed dinner in there, for which they’d paid $300 a head.

Then there’s S.E.A. which stands for Sven Elverfeld Aboard; Elverfeld is the chef at the three Michelin-starred restaurant at The Ritz-Carlton, Wolfsburg, in Germany. This room wasn’t set up when we visited and seemed a little stark, but no doubt looks more romantic at night. With a seven-course wine-paired tasting menu costing $285 per person, S.E.A. sails straight into position as the single most expensive restaurant on a ship.

Will The Kids’ Club Concept Work?

Surprisingly, a small kids’ club, Ritz Kids, runs along the side of Deck 8. Essentially, it’s a playroom with a soft play area, books, and games. It’s run by the watersports team when they’re not manning the marina platform and has an educational theme. Kids aged four to 12 are accommodated, although that’s a big age range to have in one space. There’s a cost, too: $45 per child for three hours.

The idea, we’re told, is that Evrima’s passengers are multi-generational groups who do everything together; this is not the kind of kids’ club where you’d just dump your offspring for the day.

The rest of the yacht doesn’t seem particularly child-friendly; it’s too sleek and beautiful, and too dedicated to lotus-eating. Let’s hope Evrima’s families come with well-behaved kids.

Suites Are Smart And Spacious

There are six categories of suites, from entry-level Terrace Suites to the two Owner’s Suites. The 12 duplex Loft Suites are likely to be in demand; their layout is clever, with the sleeping area downstairs, with a big picture window, and the relaxing and dining space upstairs, where there’s a balcony. They’re like very chic apartments.

Even the 90 Terrace Suites feel hotel rooms, thanks to high ceilings and generous seating areas. Minibars come with bottles of Moet, which are replaced whenever you want, and we love the elegant, if gimmicky Moet-branded stand that holds two champagne classes, which don’t have a base, just the flute and a delicate stem.

A word about the Owner’s Suites, which are not complete at the time of writing, due to the inevitable supply chain issues. We know they’ve got vast terraces and impressive whirlpools. How do we know? Because their terraces are in view of anybody leaning over the aft railing of deck 8. Privacy might be an issue – but on the other hand, some people like to be seen.

A Lot Is Included -- But Not Everything

Evrima includes many things, as you’d hope for a daily rate of more than $1,000 per person, but not everything. The S.E.A. restaurant has a cover charge of $285 per person, while menus in the private dining room also carry a surcharge. A wide selection of wines is poured with meals, with no compromise on quality – the house rosé, for example, is Whispering Angel. The premium wine list ranges from reasonable – $45 for a Sicilian red – to an eye-watering $9,900 for a bottle of vintage Mouton Cadet Rothschild.

Spa treatments are on the costly side, with a 60-minute massage costing $225. What’s nice about the spa, though, is that it’s run by Ritz-Carlton, using British ESPA and 111 SKIN products, so there shouldn’t be any of the dreadful pushy sales pitches that you’d get in a OneSpaWorld facility. Then there’s the price for the kids’ club, which is unlikely to bother the kind of customer that sails on Evrima. But some things are surprising; $35 per gram if you want white truffles shaved onto your mushroom risotto, for example. And while other superyacht operators like Scenic and Aqua Expeditions include a range of excursions, on Evrima, you pay for all activities ashore.

Evenings Are Laid Back

You won’t find Broadway shows on Evrima, or comedians, quiz shows and magic acts. The focal point of nightlife is the Observation Lounge, a stylish bar and lounge with doors that open onto a chic deck area, dotted with loungers and giant clamshell beds. On balmy evenings, a DJ is stationed on a raised circular area, and the party goes on till late if the crowd's in the mood. There’s a jazz trio in The Living Room, too, which passengers love, but this is such a big space it’s hard to imagine it having an intimate, after dinner feel.

There are genuinely lovely touches at all levels. Big bottles of SPF30 and 50, as well as aloe gel for sunburn, are stationed at all sunbathing areas, so you can leave the sun lotion at home. In the spa, the couples’ massage room has an outside area, so you can enjoy an al fresco massage on a private balcony, shaded from the sun by gauzy curtains.

Other things: If you want a fun workout with friends, the exercise studio is available for private groups, at no charge, with more than 1,500 classes to choose between, playing in front of you on a big screen.

We absolutely love the concept of the Marina Terrace. When the ship is at anchor, the whole back of deck 3 opens up to create a stylish sunbathing area, right at water level, as well as a platform from which to launch the water toys. There’s more; big panels also fold out each side, creating more sunbathing space, while the covered area, protected from the sun but now open to sea breezes, serves as a bar with snacks.

We’re Not Quite Convinced By…

Evrima has no glaring misses, as such. Some spaces still feel a little stark, but should settle in. S.E.A. certainly feels minimalist but the tables weren’t laid when we visited. The big Living Room, which is all open plan to the reception area, the library and the shop, feels as though it could lack atmosphere in the evenings, especially as the yacht will follow the sun and guests are likely to be on deck or in the Observation Lounge. Having said that, passengers effusively praise the jazz musicians who play here.

The shop, while not a miss, is certainly aimed at the "one percent". When we were on board, they’d just sold a Hermès Birkin bag for a cool $34,000.

Appealing to the cash rich, time poor, itineraries are mainly just seven to 10 nights, designed around the ports and anchorages favored by the superyacht set, as well as marquee ports with appealing sightseeing. No two itineraries are the same, so anybody wanting a longer cruise can simply bolt two together.

Each itinerary, too, is designed to spend around two days at anchor, so the marina platform can be used to the full.

Evrima is a breath of fresh air. It’s beautiful, stylish, well designed, and confident. With the vast database of Marriott International to tap into, it’s going to expose an entire new, moneyed market to life at sea.

Will it revolutionize luxury cruising? We’re not sure. Scenic launches Scenic Eclipse II next year, while sister company Emerald Cruises has had terrific reviews for its own superyacht, Emerald Azzurra, pitched at a much lower price point than Evrima but oozing yachting chic nonetheless. SeaDream Yacht Club has revamped both its small ships, while Four Seasons will be entering the fray in 2025. So, there’s competition out there, although Prothero insists that his competition is a villa in Tuscany or a luxury safari, not other ships.

It’ll be interesting to see how Evrima’s sense of space and luxury translates to The Ritz-Carlton Yacht Collection’s next two ships, which will have 228 suites as opposed to 149. But many of Evrima’s cool features and concepts -- and its superb service -- should certainly make other high-end lines sit up and take a good look.