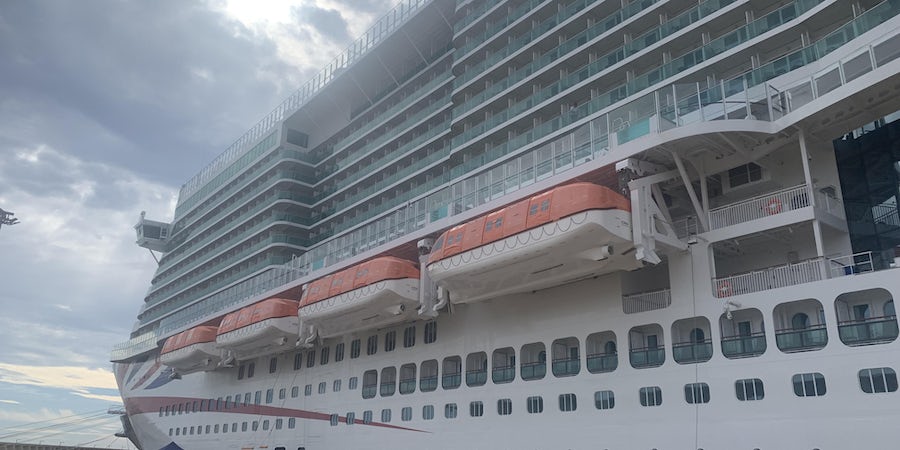 Why Is P&O Cruises' Iona the Most Popular Cruise Ship in Britain?

We're onboard P&O Cruises' Iona cruise ship, just over a year after the vessel's delayed launch.

The U.K.'s most popular ship (according to Cruise Critic readers) is on a two-week cruise from Southampton to Spain and Portugal and back, and we've joined for the first half, with stops in Vigo, Malaga, Alicante and Barcelona, where we are joined by a very special guest -- Gary Barlow -- for two charity performances onboard (more on that in a forthcoming article).

But what we want to know is -- why is P&O Cruises' Iona so popular with Brits? We got onboard to find out why.

Here's our take on why Iona is the most popular cruise ship in Britain.

1. Iona Has the Wow Factor

Iona is a very elegant cruise ship, more reminiscent of a high-end city centre hotel. P&O Cruises used designers Richmond International, who usually design five-star hotels, to fit this out and it really shows in both the public and private spaces -- lovely woods and marbles and stylish furnishing, nothing garish or out of place, while also having the wow factor in the Atrium and the SkyDome.

You enter into the triple-height Atrium where you're greeted by the familiar sight of a Costa, signs for The Quays (see below); above steak restaurant Keel & Cow, and above that wine guru Olly Smith's The Glass House.

Does that appeal to Brit sensibilities? Well, in terms of design restraint, a lack of garishness that you might find on other cruise ship brands, and familiar names and venues, then yes.

The ship also somehow manages not to feel over crowded, despite 5,200 passengers being onboard. The huge atrium, the SkyDome and the acres of outside space with multiple hot tubs and pools, means that passengers are not all sat round one main pool deck trying to reserve deck chairs.

2. Entertainment on Iona Cruise Ship is Aimed at Brits

On this cruise we've had former Hollyoaks actor-turned singer Tom Vaughan, X-Factor winner Matt Cardle, BGT comedians The Noise Next Door and a comedian called Ignacio Lopez Espanyolo, a Spaniard transplanted to Wales who makes wry observations about Spanish and British culture -- not to mention Aardman creations Shaun the Sheep and Wallace & Gromit! -- all performing onboard (and that's before Mr Barlow took to the stage on Saturday night).

Speaking of Gary Barlow, special mention must go to him for curating the acts in the wonderful 710 Club, who if you haven't heard of them yet, you likely will soon. It's a wonderful way to showcase up-and-coming British talent, and unique to Iona (and soon to be on Arvia).

All of them familiar names, faces and sense of humour to the passengers onboard.

As well as the live performances, we've had films like Downton Abbey and Kingsman in the four-screen cinema complex; Premiership games shown in Brodies and plenty of pub quizzes taking place throughout the week.

Also, all announcements are made only in English (not surprising when 99% of the passengers hail from the UK).

3. Food & Drink on Iona is Geared to British Tastes

In The Quays you'll find fish ‘n’ chips served all day and a full English breakfast; in Horizon buffet there's Marmite, back bacon and Alpen for breakfast and at lunch there is always a curry corner and a Sunday roast on offer (on any day of the week, and throughout the day).

The speciality restaurants include Sindhu, for Indian cuisine (pictured above); Epicurean, the high-end restaurant, has rare breed cuts of British meat on the menu. It also serves a lovely Afternoon Tea onboard designed by Eric "Cake Boy" Lanlard. The Keel & Cow meanwhile, a steak and burger restaurant, again has beef sourced from British cows.

The Celebration Night dinner is designed by Michelin-starred chef Marco Pierre White who has a long association with the line. Pierre White also joins the ships on selected sailings, which is just as well, as I doubt he would have been too happy with what's being served under his name now -- a mezze plate consisting of a slice of carrot, a slice of cucumber and some dried scraps of bread masquerading as flatbreads with a few tiny splodges of unidentifiable sauces, as a starter.

The mains were not much better; I opted for the Atlantic cod, a tiny portion served tepid and tasteless, with a handful of limp vegetables. Maybe it was an off night, but it's not a meal which befits the name of a Michelin-starred chef.

4. Service Onboard on Iona Cruise Ship Is Hit & Miss

No Brit really wants a "Hi I'm Candy and I'll be your waitress this evening,"-U.S.-type service, but I would argue they like a smile and a bit of banter. Sadly, like the food, the service either knocks it out of the park (Anderson's, Epicurean, our cabin steward), or is lacklustre and disconnected, with restaurant staff concentrating on logistics rather than passenger experience. Not a single waiter in the main dining rooms Aqua, Pearl or Opal asked "How is your meal?" Staff asked for your food orders almost within seconds of delivering the menus, yet meals were served at a painfully slow pace.

It was a different story however in the speciality restaurants, where staff where attentive and engaging.

5. Bars & Pubs on Iona Cruise Ship Are Like a U.K. County Town

Iona tapped into the gin obsession this country currently has, by presciently launching the first gin distillery onboard a cruise ship, adjoining the hugely popular Andersons Bar, manned by the friendliest bar team we've encountered on a ship -- Imran, Edwin, Kelly, Vishal, Eric, Marilyn and Tess -- who also distill the spirit and run gin tasting classes.

Go in there more than a couple of times a cruise and it's like walking into the "Cheers" bar where everybody knows your name.

(New ship Arvia replaces gin with a rum distillery from the Jersey-distilled Tidal Rum company, which is sure to be equally as popular).

6. Cabins on Iona Cruise Ship Are Elegant And Well-Designed

Like the rest of the ship, the cabins are elegant and well-designed, with kettles, a box containing tea bags and milk sachets and British plug sockets as well as USB ports beside the bed. There are thoughtful touches like a couple of cans of water to welcome you onboard as well as daily biscuits delivered to your room.

That extends to the bathroom, which has a strong Scandi-aesthetic -- blond woods and a back-lit mirror, with decent storage and a Hans Grohe power shower.

The one thing we really missed was the turn down service, dropped post-pandemic. Fortunately, our very helpful steward (Nirmal) was sometimes around in the evening and would bring us ice and wine glasses, and then would make sure they were there each evening subsequently.

7. Itineraries on Iona Cruise Ship Include Spain And Portugal

There are few (if any) countries better known (or loved) by Brits than Spain, which is where this ship spends its winter months. I'd wager that every single passenger onboard had visited at least one of our port calls before, either on a cruise or on a two-week summer holiday.

And it's telling that on this particular 14-night cruise to Spain and Portugal one of the most popular excursions was to Benidorm.

Iona is based in Southampton, which of course eliminates air travel, a huge plus for UK-based passengers.

Apart from the Horizon buffet, the busiest venue onboard was the future cruise sales department. Almost every conversation we listened in to was about either a past cruise -- or a future one, how to get on board credit and the best time of year to find a deal.

Cut this ship in half and Britain runs through it like a stick of rock. Sailing on Iona is like stepping into a British county town -- familiar accents, familiar shared tales and familiar likes and dislikes, whether that's the love of a good curry or Marmite at breakfast, TV shows or former Hollyoaks actors -- it's a slice of Britain at sea and Iona delivers exactly what Brits want, time and again.