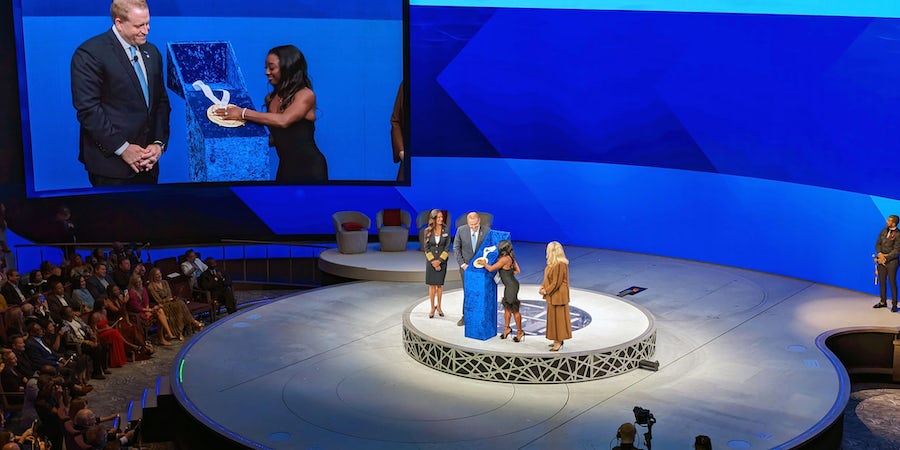 Godmother Simone Biles presses a button to christen the ship in the naming ceremony for Celebrity Beyond. (Photo: Colleen McDaniel)

Godmother Simone Biles presses a button to christen the ship in the naming ceremony for Celebrity Beyond. (Photo: Colleen McDaniel)

"I name this ship Celebrity Beyond. Bless her and all who sail her," Biles said before pressing a giant, gold-medal button that sent a bottle of Champagne smashing into the hull of the ship.

The ceremony took place in front of cruise, port and shipyard VIPs, media, travel advisers and other invited guests who watched from various venues around the 3,260-passenger ship.

As has become the Royal Caribbean Group tradition, events kicked off with a bagpipe welcome in the ship's main theater. British singer, songwriter and actress Leona Lewis then took the stage, performing "Fire Under My Feet" as a montage of Biles' feats and achievements played on the 20-foot tall 4K LED screen behind her. The performance was followed by blessings and the singing of the National Anthem by the ship's entertainers. Speeches from Celebrity Cruises President and CEO Lisa Lutoff-Perlo and President and CEO of the Royal Caribbean Group Jason Liberty followed, along with a second performance by Lewis.

The preamble out of the way, Biles took the stage for the main event, thanking the audience and Celebrity team for the honor. A cruise fan and cruiser herself, Biles also thanked her parents, who sat in the front row during the ceremony.

Biles joins Nobel Peace Prize Laureate Malala Yousafzai and Reshma Saujani of Girls Who Code as godmothers of ships in the line's Edge Class, something Celebrity Cruises President and CEO Lisa Lutoff-Perlo calls intentional. Lutoff-Perlo praised the godmothers for being "groundbreaking and transformational," something she says they share with the Edge Class of ships.

"Thank you, Simone, for joining our family and always reminding us of the power of courage," she said.

Said Biles, an adoption, foster care and mental health advocate: "It is an honor to be selected as Beyond's godmother and to join such a distinguished group of strong, barrier-breaking women who have been named as Celebrity’s Godmothers before me. I appreciate the important message this designation holds in recognizing our accomplishments as empowering women, and I am honored to share the stage today with fellow brave, boundary-breaking leaders like Lisa-Lutoff Perlo and Captain Kate McCue.”

Liberty, too, spoke in awe of the accomplishments of the women sharing the spotlight.

"What an honor it is to be onstage with these three trailblazing women," Liberty said, gesturing to Biles, Lutoff-Perlo and McCue, captain of Beyond.

In addition to being the most-decorated gymnast in history, Biles is also the youngest recipient of the Presidential Medal of Freedom

A naming ceremony is a traditional way of celebrating a new cruise ship, usually accompanied by blessings and Champagne bottle breakings. While Celebrity Beyond isn't brand new, (it started sailing in April 2022) it's on the cusp of its inaugural Caribbean season. The ship is the third in Celebrity's heralded Edge Class of ships, joining Celebrity Edge and Celebrity Apex. A fourth, Celebrity Ascent, is due in late 2023, and a fifth, yet-unnamed ship is planned.