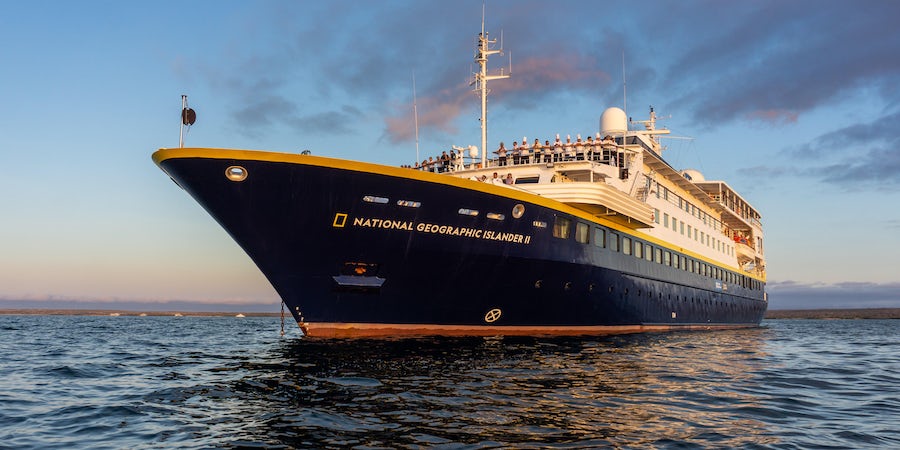 Just Back from a Galapagos Islands Cruise with Lindblad Expeditions

(4:24 p.m. EDT) -- A Galapagos Islands cruise is a life-changing thing. The first UNESCO World Heritage Site, this volcanic archipelago is one of the world's ultimate bucket-list trips thanks to its unique ecosystem and high degree of conservation that has kept it about as untouched as one could reasonably expect in these modern times.

Lindblad Expeditions knows the Galapagos Islands well, too. It has been offering Galapagos cruises here for 50 years -- rugged expeditions that focus on education and conservation as much as they do on tourism and enjoyment. In fact, Lindblad literally created the first modern expedition cruise to these islands in the late 1960's.

National Geographic Islander II Is an Elegant Winner in Galapagos

Angela Flaim, wife of longtime conservationist and Lindblad leader Juan Flaim, who passed away in March, served as Godmother to the new National Geographic Islander II. The ship was officially christened on October 24, 2022, in a striking sunset ceremony that was observed from the water by the ship's entire passenger complement.

Longtime cruisers might recognize the unique 280-foot vessel, which previously served as Crystal Cruises' yacht-like Crystal Esprit. Crystal acquired the vessel in 2015 and put it through a massive makeover, before selling it to Lindblad Expeditions in the fall of 2021 as the company looked to trim its costs.

That doesn't mean that Lindblad just threw a coat of paint on and called it a day. Over the course of the five days we were onboard, we were pleased to see the scope of improvements Lindblad made to this ship before calling it National Geographic Islander II were significant indeed.

In drydock earlier this year, Lindblad outfitted the ship with a brand-new stern-mounted zodiac planform and expanded the outdoor dining space at the Patio Café on Deck 4 by moving the space's entire stern wall superstructure back by five feet and opening up formerly-closed off windows.

The former casino is now a science laboratory, where actual scientific research is conducted on several sailings (more on that later). The navigation bridge is now open for all to visit and see the operational side of sailing the Galapagos. The Cove Lounge was outfitted with high-definition displays for presentations and lectures, and its forward observation deck, closed off in its Crystal days, re-opened.

Perhaps the biggest improvement was the removal of eight suites onboard, which were combined to create four massive 515-square-foot Islander Suites with separate living and sleeping areas, along with spacious bathrooms. One of these -- Suite 303 -- can even be combined with the adjacent standard suite next door.

Not that long ago, expedition cruising meant tiny rooms with separate beds and few features. That's hardly the case these days. Every standard room aboard National Geographic Islander II is a full suite measuring 280 square feet in size. Rooms have two oversized picture windows, enough closet storage space to last for a month, and the most generously sized, dual vanity bathrooms we've seen on an expedition vessel's standard accommodations.

Interactive flat-panel televisions with immersive sound bars, full sized couches, in-room coffee machines, and pillow-soft beds round out the features in what is Lindblad Expeditions first-ever all-suite expedition ship -- one that offers a stellar 1:1 passenger-to-crew ratio.

To top it all off, the ship's uppermost deck is equipped with hammocks, a swimming pool, and some of the coziest seating options we've seen on an expedition ship. It's the kind of place where you can kick off your hiking boots, grab a cold drink, and watch the Galapagos wildlife go by. And it will. Massive sea turtles, fish, sea lions, and even Galapagos penguins were routinely spotted from the ship's upper decks, swimming in the crystal-clear waters.

The "Wild Galapagos Escape" itinerary National Geographic Islander II sails is just seven days end-to-end, including flights, meaning only five nights are spent onboard, with the other two nights being reserved for operational overnights in the Ecuadorian port city of Guayaquil, where flights to the Galapagos Islands begin and end.

It is one of two itineraries Lindblad offers in the Galapagos, with the second, a 10-day itinerary aboard the 96-passenger National Geographic Endeavor II, offering a full week of cruising in the Galapagos.

To say it is an ambitious itinerary is an understatement, cramming a lifetime's worth of experiences into just five days. Mornings typically begin very early (6:30 a.m. expeditions ashore, or kayaking outings, aren’t uncommon), followed by breakfast, lectures, and more outdoor explorations.

Most days, the ship will visit one part of the Galapagos in the morning, with a second landing in a new location after lunch. Actual landing sites and islands are always subject to change, as is the nature in the Galapagos, but our last day saw us make four separate landings and offered hikes, kayaking, stand-up paddleboarding, and even a sunset beach break.

That, of course, is all before the informative lectures and succulent meals offered onboard, not to mention evening expedition recaps and evening presentations in the ship's main lounge.

This was my third expedition cruise to the Galapagos, and my thirty-something expedition cruise outing, so I know how busy these voyages can be. Lindblad really kicks it up a notch, to the point where passengers were joking someone needed to build a mandatory siesta time into the schedule.

Everything on-shore is led by Lindblad's superb expedition team, the vast majority of which are from the Galapagos Islands themselves. These folks are scientists, photographers, researchers and conservationists in their own right. And while many of our fellow passengers were birders, geologists and amateur marine biologists, the expedition team is there to provide you with the necessary knowledge to fully appreciate these islands.

And, despite the exhaustive pace of the cruise, I definitely saw and immersed myself in all the natural beauty the Galapagos has to offer, as we explored parts of Baltra, Santa Cruz, Rabida, Santiago, Isabela, Fernandina and San Cristobal islands -- in just five days.

Lindblad Expeditions' Focus on Science, Education in The Galapagos is Key

The National Geographic name isn't just a buzzword. Lindblad and National Geographic have been partners in education and conservation since 2004 across the line's entire portfolio of destinations, including the Arctic, Antarctic, Amazon, French Polynesia, Central and South America, and beyond.

Aboard National Geographic Islander II, Lindblad has set aside two cabins per voyage for scientific staff conducting research. On our voyage, a team of international women working in conjunction with National Geographic and the Charles Darwin Research Station were conducting scientific experiments, deploying a high-tech underwater camera to the sea floor to look for new marine species.

The group showed passengers the camera setup one evening -- a high-definition camera suspended in a waterproof housing that James Cameron would no doubt drool over -- and explained their research. To get that close to a scientific project -- and to be able to ask questions -- was a real highlight of the trip for us.

The scientists aren't just there to do their jobs, however: expect to see them at lunch and dinner, and giving talks and presentations at odd times throughout the cruise. That involvement between researcher and passenger initially sounds like a strange one, but we found it was a natural extension of the convivial expedition experience Lindblad has worked so diligently to cultivate.

Lindblad Levels Up in the Galapagos

Four years ago, we sailed the Galapagos aboard the 96-passenger National Geographic Endeavor II. It's a cute, cozy little ship that offers traditional (read: small) accommodations and basic, if attractively decorated, public rooms.

I personally enjoy small cabins; to me, they feel warm, cozy and inviting. But not everyone feels as I do, and not everyone wants to pay top-dollar for a ship that doesn't offer all the bells and whistles.

That's where National Geographic Islander II fits in: from the onboard Ecuadorian cuisine to the expedition staff, the activities ashore and the ship itself, everything feels substantially elevated over Lindblad's past offerings.

Lindblad has always offered a superb expedition cruise experience that is welcoming to families with children who are eager to learn. Some expedition cruises, particularly luxury ones, discourage those under 18 from participating. Here, the handful of kids onboard were treated to private tours of the ship's bridge, an educational scavenger hunt, and even supervised lessons on how to drive the ship's zodiac rafts.

One passenger -- a young girl of maybe 10 sitting near the lectern during our Daily Recap in the Cove Lounge -- summed up what all the adults in the room were thinking on the last night of our cruise.

"Why can't I stay here forever?" she asked.