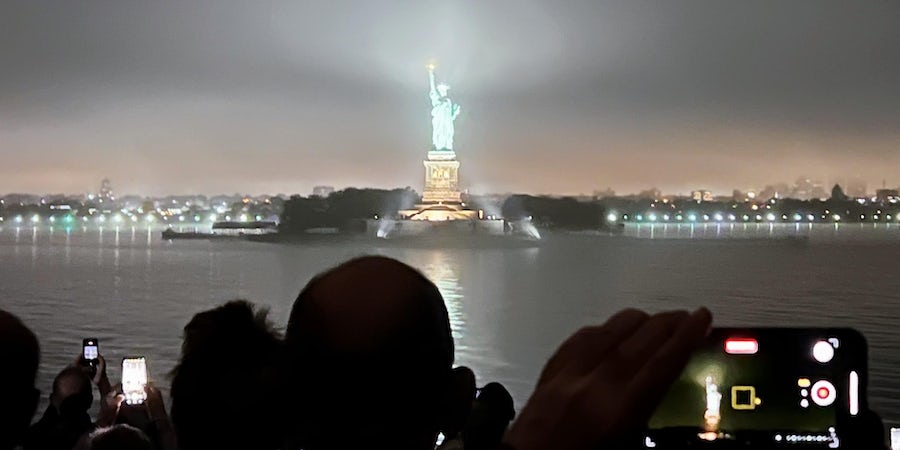 This commemorative transatlantic crossing recreated the company's first voyage back in October 1872, when Holland America Line's first ship -- the Rotterdam I -- left the Dutch city of Rotterdam and sailed for 15 days to reach New York City.

To mark the day and recognize the occasion, Manhattan Borough President Mark Levine declared October 26 an 'honorary day' for Holland America Line. And the cruise line threw a party on board Rotterdam during the evening that the ship was docked next to the USS Intrepid Sea, Air & Space Museum on the Hudson River.

The evening began with appetizers and cocktails, including the 150th Martini and other drinks that had been served during the popular 'Throwback' Happy Hours on the crossing. The appetizers were drawn from the onboard specialty restaurant menus created by Chefs Jacques Torres, Rudi Sodamin, and David Burke, who are members of the HAL Culinary Council and were onboard for the evening.

The main event of the evening was a performance of a specially-composed musical piece by Emmy Award-winning producer and Emmy-nominated composer Steven Schoenberg that accompanied a short film about the cruise line's 150-year history. The 25-member ensemble performing the piece was comprised entirely of musicians who had, at one time or another, been part of smaller ensembles that had performed on Holland America Line's Lincoln Center Stage.

"There's nothing like sailing into New York under the Verrazano Bridge, past the Statue of Liberty and Ellis Island," said Holland America Line President Gus Antorcha in a presentation before the musical performance. "Standing on deck, you can’t help but think back to more than a century ago, feeling the emotion of arriving in America for the first time. Recreating our first voyage has been a once-in-a-lifetime experience."

As part of the presentation, a partnership between the Statue of Liberty-Ellis Island Foundation and Holland America was announced. To celebrate and commemorate the cruise line's role in bringing millions of immigrants to the United States, video content by an Ellis Island researcher will soon begin showing across the Holland America Line fleet.

And in 2023, a special exhibit about the Holland America Line will launch at Ellis Island. Included in that temporary exhibit will be models of the first three Holland America cruise ships named Rotterdam made on board by the current Rotterdam Captain, Werner Timmer.

The next phase of Holland America's 150th anniversary celebration will take place on another transatlantic crossing departing April 6, 2023, from New York, ending at Rotterdam on April 18, on the cruise line's 150th birthday.