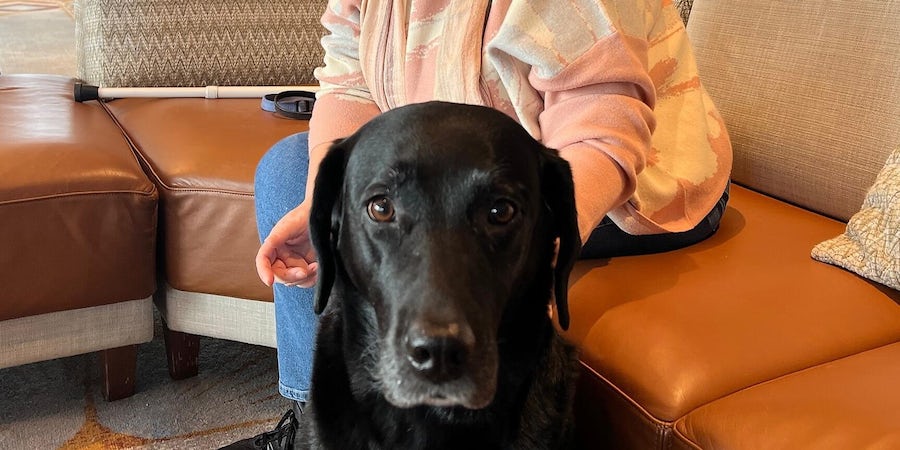 (5:20 p.m. EDT) --Shortly after Holland America Line’s flagship Rotterdam docked in New York on October 26 after a historical 150th Anniversary Transatlantic Crossing, a unique passenger was summoned to the Aft Deck 9 pool for a special ceremony.

The passenger was Joska, a service dog who has traveled on more than 50 cruises with Cornelia (Connie) and Cornelis Marinussen, who live in the Dutch city of Rotterdam and are both legally blind.

Joska is officially Cornelia's dog and has been with her since July 2014. And because during this trip Joska reached a milestone of 700 days cruising on Holland America, she became eligible to receive the Platinum Medallion, HAL’s highest guest award for cruising days.

The Marinussens have been on close to 60 cruises to various destinations around the world, including Alaska, Hawaii, Canada, Europe and the Mediterranean. And both Cornelis and Cornelia received their Platinum Medallions during the 150th anniversary transatlantic cruise.

But Holland America President Gus Antorcha and Rotterdam Captain Werner Timmers made sure to be on hand for a special ceremony to present Joska, a cruise-savvy and very friendly 10-year-old Labrador Retriever, with her own Platinum Medallion, as well as 5-Star Mariner status in the cruise line's loyalty program. Joska also received a selection of other gifts, including dog treats and personalized dog bowls.

"We wanted to honor her with an event that shows her how special she is to everyone in our company," said Antorcha. "She not only brightens the spirits of everyone on board, but she also allows Connie to do what she loves most, which is to cruise and explore the world."

During the ceremony, when Rotterdam Captain Timmers put the ribbon bearing the Platinum Medallion around Joska's neck, Joska responded by licking Timmers' face. After that, the Marinussens presented Timmers with a special plaque and a small plush Labrador pup for the ship. The couple also gave company president Gus Antorcha a plaque to bring home to the Holland America Line headquarters in Seattle.

Sailing With a Service Dog Requires Perseverance and Diligence

Traveling with Joska makes traveling easier, said Cornelia Marinussen, but the forms, fees, and paperwork required by various ports around the world can make journeys complicated. That is a task Cornelis Marinussen tackles with perseverance and strict diligence. "You need to make sure your dog has the correct certification," he said. "And you need to have paperwork on the vaccinations, get permits arranged, pay all the fees, and take care of many other things. And it all needs to be completed before you get on the ship."

Watching Joska interact with the Marinussens and many other passengers on board the Rotterdam during last week's transatlantic crossing, it is clear Joska enjoys cruising as much as other experienced travelers -- and doesn't get seasick. And when it comes time to spending time on shore, Joska "is like a walking GPS system," said Cornelis Marinussen. "She not only figures out the shortest way back to the ship, but she can also pick out our Holland America Line ship from any others that may be at the dock."