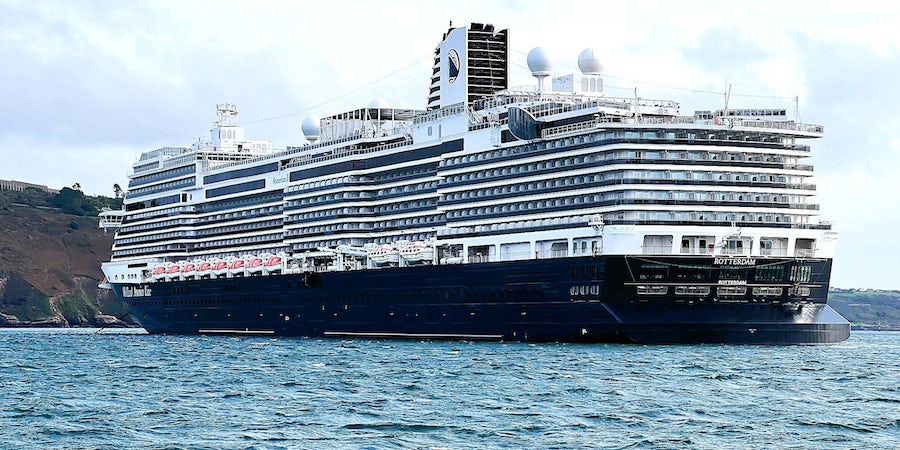 This first commemorative transatlantic crossing is recreating Holland America Line's first voyage, which began on October 15, 1872, when the steamship Rotterdam left the city of Rotterdam, the Netherlands, on its 15-day maiden voyage to New York City.

For this recreated commemorative transatlantic voyage, HAL's new Rotterdam, which was launched last fall and is the seventh ship to bear the Rotterdam name, left Rotterdam on October 15, 2022. After stops in Le Havre, France and Plymouth, England, the ship set out for a 7-day transatlantic crossing to New York City.

According to Rotterdam Captain Werner Timmers, on the original voyage the ship's stop in Plymouth was made to load on 400 tons of Cardiff coal for the ship boilers, as well some last guests and some mail. (We also learnt that the first Rotterdam ship was 81.84 meters long and 10.9 meters wide -- the newest Rotterdam ship is 300 meters long and 35 meters wide. And on the maiden trip back in in 1872, there were 70 passengers on board -- almost 2000 passengers are on this commemorative voyage.)

For our modern-day voyage, the Plymouth stop offered passengers the opportunity to visit attractions such as the Mayflower Museum, the Plymouth Gin Distillery, and the new museum, art gallery, and archive known as The Box. Plymouth is not a traditional cruise port, so local volunteers were enlisted to welcome the Rotterdam’s passengers and the town asked two military boats to move to make room for the ship in the harbor.

The first two days at sea were accompanied by waves up to fifteen feet. That was daunting for this first-time transatlantic cruiser, but not for the many experienced cruisers on board. Nor did it bother Bill Miller, an international authority on ocean liners and cruise ships who delivered a series of informative, entertaining, and photo-rich 150th anniversary lectures on the history of Holland America Line and other cruise line topics throughout this crossing.

When not giving lectures, Miller spent much of his time hearing stories from the many guests who are sailing on this voyage in part because of their family history with Holland America Line. The company played an integral role in immigration to the United States and Canada and was primarily a carrier of immigrants from Europe to the United States until well after the turn of the last century.

"For some people, this is a very emotional crossing," said Miller, "They tell me the lectures remind them of things they had forgotten about their own crossings, or perhaps from seeing a grandmother or other relative sail away on a Holland America ship. I am honored to hear their stories."

Many passengers with direct or indirect Holland America Line immigration stories were happy to share their stories during formal and informal sessions during the anniversary cruise.

For example, in 1948, passenger Bernadine Kelly's mother, Elisabeth Jansen, accompanied her grandmother on Holland America Line's Veendam from Rotterdam to New York to visit family who had emigrated in the 1920s and settled in Canada. "After two weeks, my mother's grandmother said she was ready to go home, but my mother decided to stay."

Willem and Marian van de Wiel first met on the Statendam in 1968 and were married a year later. They celebrated their 50th wedding anniversary on the Rotterdam V, Holland America’s former flagship that is now retired and serving as a floating hotel, museum, and restaurant in Rotterdam. For their second cruise together, they are celebrating 53 years of marriage on Holland America Line's 150th anniversary transatlantic sailing.

In the main dining room, each night's menu features at least one dish based on a recipe the culinary team culled from menus dating back to the 1920s. And early in the crossing, one special 150th Gala Menu was filled entirely with dishes featured on past voyages. During this voyage, selections included Rack of Lamb a l’ Ambassadeur, Fresh Lemon Sole Flamande, Holland Duckling Wine Sauce, and Artic Char a la Normande. Some of these 'retro' dishes will now be added to dining room menus fleetwide for this anniversary year.

The HAL Pils is made by Pike Brewing which, like Holland America Line, has its homebase in Seattle. The special-edition beer takes hops from Washington's Yakima Valley and is packaged in a collector's can adorned with an image that is a take on the iconic Jan van Beers poster of 1898 showing a woman in a nautical-blue dress holding a Holland America Line steamship above her head. The new beer will be available fleetwide in all HAL bars and lounges starting in January 2023 and six-packs will be available for purchase in the shipboard shops.

Another popular drink event on this transatlantic cruise is the Throwback Happy Hour featuring the 150th Martini, tankards of Heineken lager, and other vintage drinks at prices ranging from just 25 to 75 cents!

Throughout this transatlantic voyage, HAL's Vice President of Dining and Beverage Operations, Anthony Stice, has also been offering four and five-star members of the Mariner Society loyalty program bonus 'surprise and delight' offerings during their complimentary wine tastings.

Shopping, always a popular pastime on cruise ships, is especially enticing on this special crossing due to the debut of a new line of 150th Anniversary merchandise. Celebratory items include commemorative key chains, wine bottle stoppers, playing cards and shot glasses to ship class coin sets, whisky glasses, windbreakers, with prices ranging from $19.95 to $84.95. The full line of 150th anniversary items should be available on all Holland America Line ships by the end of the year but will not be available to purchase online.

World Premiere of New Show "A City on the Sea"

Spend any time on any cruise ship and you cannot help but wonder, “How do they make this all work?”

On the final sea day the crossing, HAL debuted a creative new multimedia show, "A City on the Sea," that answers that question with a multi-media mix of live crew presentations, video footage and interviews. The program features ship captains, engineers, medical staff, musicians, restaurant staff, stateroom attendants, and others describing the challenges, opportunities, and rewards of working on a Holland America Line ship.

"A City on the Sea" will be featured on every cruise fleetwide starting in early 2023.

Rotterdam will arrive in New York Harbor on the morning of October 26 and set sail for Fort Lauderdale the next day. While in New York, the ship will host a 150th anniversary kickoff event featuring a specially commissioned musical performance.

If you missed this and want to experience it there is good news -- there is another transatlantic crossing cruise scheduled for April 6, 2023. That voyage will begin in New York and arrive in Rotterdam on April 18 -- the 150th anniversary of the cruise line's official founding.