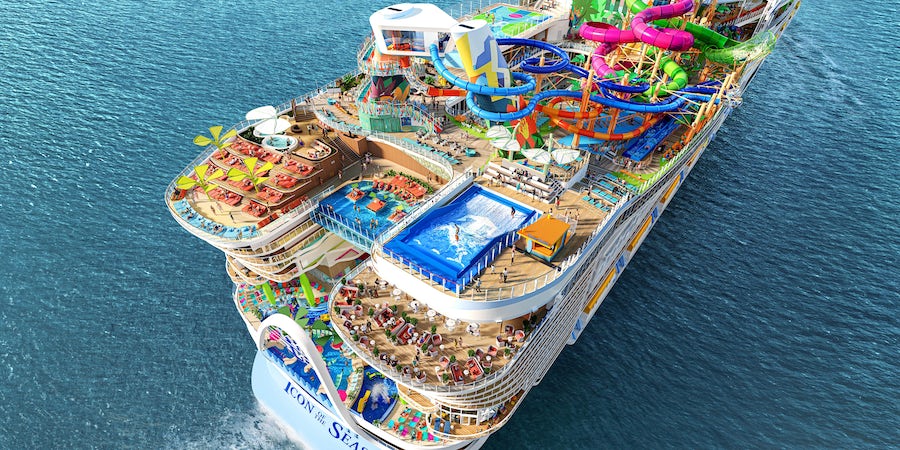 Icon of the Seas will be a true amuseument park at sea (Rendering: Royal Caribbean)

Icon of the Seas will be a true amuseument park at sea (Rendering: Royal Caribbean)

(6 a.m. EDT) -- For the first time since announcing the construction of Icon of the Seas, Royal Caribbean has shared a comprehensive look of its new ship, which also ushers in a new class for the line. And what’s apparent at first glance is that this megaship will be all about families, with onboard experiences that span multiple age groups.

This first look of the ship’s asymmetrical layout, revealed exclusively to the press at Royal Caribbean's headquarters, shows oodles of tangled slides, bright colors across the spectrum, layer upon layer of exposed decks and an abundance of pools and water attractions. Icon is akin to a floating theme park, not unlike Royal's Perfect Day at CocoCay.

Michael Bayley, president and CEO of Royal Caribbean International, made no secret of Icon's primary audience. "Our target market is family and I feel like we'll deliver the goods. This ship is an evolution of all that we've built and learned from our other ships and fulfills our promise to deliver the ultimate family vacation."

Along with revealing the look of the ship, Royal also announced that Icon of the Seas will be delivered in late 2023, pushing back its maiden voyage to January 2024. General sales open on Tuesday, October 25, while Crown & Anchor loyalty members will be granted early access to bookings on Monday, October 24.

Along with being first in class, Icon brings several other firsts for Royal Caribbean, including being the first LNG-powered vessel in the cruise line's fleet. The line is calling Icon of the Seas its “most sustainable to date,” with shore power connection and other innovations.

Speculation had been rife over the dome that Royal Caribbean has been building for Icon of the Seas. And now we know: the glass-covered AquaDome on the ship’s bow is designed to feature wraparound ocean views during the day and at night will house the signature AquaTheater, complete with a 50-foot waterfall. This AquaTheater will have a transforming pool, four robotic arms and state-of-the-art projection capabilities.

AquaDome is also one of Icon's eight neighborhoods, expanding on the concept first introduced on 2009's Oasis of the Seas and featured on subsequent Oasis-class vessels. Aside from AquaDome, four new neighborhoods are set to debut on Icon: Thrill Island, Chill Island, Surfside, and The Hideaway. Royal mainstays Central Park, Royal Promenade and Suite Neighborhood round up the ship's neighborhoods.

Plenty of Slides and Attractions in Thrill Island

Thrill Island best represents Icon of the Seas' theme park-like appearance. The centerpiece of this neighborhood will be Category 6, a waterpark featuring 6 waterslides. These include Pressure Drop, an open free-fall slide with a 66-degree incline that Royal Caribbean says is the first in the industry. The Frightening Bolt is another drop slide that registers 46 feet, which the line also says will be the tallest at sea. The Hurricane Hunter will take the trend toward raft slides even bigger, with four riders per raft, making it the first attraction of this sort that can include the whole famiy. Finally, Storm Chasers will offer passengers a chance to race each other on mats.

Continuing the thrills is Crown’s Edge, an attraction that the line is billing as “part skywalk, part ropes course and part thrill ride.” It culminates in a moment where you swing 154 feet above the ocean.

Multiple Pools and Swim-Up Bars For Adults and Kids

On the opposite side of the spectrum, Chill Island has a more laidback atmosphere. Occupying three decks at the center of the ship, this neighborhood will feature four of the seven pools on board the ship. Swim & Tonic is set to become the line's first swim-up bar at sea, while Royal Bay pool is billed as the largest pool at sea. The remaining pools are the adults-only Cloud 17 and the infinity-edge Cove Pool.

Lime and the Coconut will return with four locations, including Royal Caribbean’s first frozen cocktail bar.

Elsewhere, Surfside is Icon's neighborhood devoted to younger kids with two splash-and-play areas: Splashaway Bay and Baby Bay. The neighborhood will also feature dining options, as well as lounge areas, a bar, a carousel, an arcade and a lounge pool for adults.

On the back of the ship', The Hideaway is anchored by what is billed as the first suspended infinity pool at sea and features a multilevel terrace, whirlpools and a dedicated bar. This neighborhood will be perched 135 feet above the water and is meant to take advantage of uninterrupted ocean views.

The Grove Comes to the Suites; Other Favorites Return

The Suite neighborhood is not new, but the private sundeck has been re-imagined as a space called The Grove. The multi-level area will have a private pool and whirlpool and Mediterranan restaurant, as well as a two-story Coastal Kitchen.

Not much has been revealed about Icon of the Seas dining options, but the Royal Promenade, Central Park and Surfside neighborhoods are expected to feature a variety of restaurants. Line favorites Giovanni’s Kitchen & Wine Bar and Izumi are definitely back.

Icon of the Seas Will Feature 28 Cabin Categories

With 2,805 cabins, accommodations are abundant on Icon of the Seas. But there is also an emphasis on choice, with 28 cabin categories, including new layouts for families of three, four, five and more.

The clear standout is the three-story Ultimate Family Townhouse, a 1,700-square-foot suite that will accommodate up to 8 passengers and will feature an in in-suite slide, a cinema space, karaoke and a private entrance to the Surfside neighborhood. It also has its own white picket fence and mailbox, for that “home away from home” feel.

Also of note: The Surfside Family Suite has alcoves for kids tucked away from the adults. New for Royal include Sunset Corner Suites and Panoramic Ocean View cabins that are located within the AquaDome.

Icon of the Seas will Focus on Caribbean Itineraries

Owing to its obvious family-friendly vibe, Icon of the Seas is scheduled to homeport year-round in PortMiami and sail 7-day Eastern and Western Caribbean itineraries. All itineraries will visit Royal's private island destination in the Bahamas, Perfect Day at CocoCay.

Some of the destinations set to be featured on Icon of the Seas’ itineraries include Cozumel, Phillipsburg, St. Maarten and Roatan.