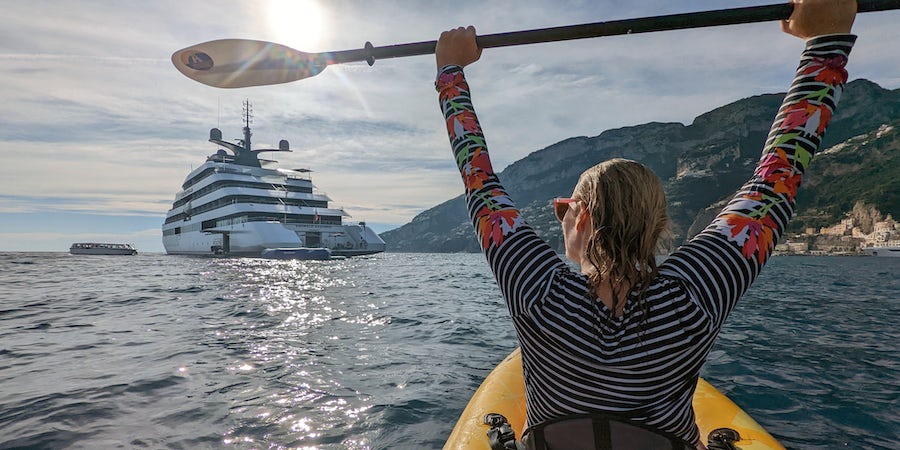 Kayaking off the stern of Emerald Azzurra. (Photo: Colleen McDaniel)

Kayaking off the stern of Emerald Azzurra. (Photo: Colleen McDaniel)

(1:55 p.m. EDT) -- Whatever you do, don't call Emerald Azzurra a cruise ship: The new vessel from Emerald Cruises is a "luxury yacht." At least, that's what the captain and crew of the first ocean-going ship from Emerald will tell you.

It's tough to argue with that statement. After all, the 100-passenger ship cuts a striking profile that is very yacht-like, with a long bow, sharply stacked decks and aft marina. It draws attention everywhere it goes, too. We found this out during our weeklong sailing from Dubrovnik, Croatia, to Rome. Wherever Emerald Azzurra went, people stopped and stared, taking pictures and asking about the ship.

Emerald Azzura is the first oceangoing ship from Emerald, which is perhaps best known for its European river cruises. With a slate of new ships on the horizon that aim to provide that intimate yacht feel -- including the brand-new Ritz-Carlton Evrima, which debuted this past weekend -- this cozy style of cruising is the hottest trend on the waves.

If you've dreamed of sailing on your own private yacht but perhaps lack the funds to do so, this is about as close as you'll get.

Design-wise, the ship offers lots of open space with giant, padded sunbeds and loungers. It also has a large infinity pool at the aft on Deck 6, and a sizable hot tub a deck above. While our sailing offered no actual sea days, we spent a half-day chilling by the pool as we sailed toward Sorrento. Even though the ship was almost full, we didn't have to fight for space. Instead, we lounged on our sunbed until the sun got to be too much, then grabbed some clamshells in the shade while enjoying some Aperol spritzes.

We also took full advantage of Emerald Azzurra's marina, which is available to guests when the ship is anchored offshore the destinations it visits. We were able to use the marina on three days of our seven-day sailing. The ship really shined with its offerings, including a large floating trampoline, standup paddle board, inflatable kayaks, floating pads and, best of all, SeaBobs -- a bit like scooters for the water, allowing guests to skim along the waves or dive underneath the surface behind a handheld motor. This must be what it feels like to be a dolphin.

Even if you don't actually want to get into the water, the marina offers a deck space and chairs for relaxing and watching the action.

Emerald Azzurra also has an open-bridge policy, allowing passengers to see the captain and his officers in full command of the vessel when conditions allow. On our sailing, Captain Julian was one of the most popular people onboard, easily chatting up guests, telling jokes and effusively praising his crew.

Several of the crewmembers we spoke with said they had previously worked on private yachts, so they have experience delivering on a smaller scale.

You'll Get to Know the Crew Fast

Emerald Azzurra staffs 68 crew, and many of them perform multiple functions. The woman who takes your breakfast order in the morning might be dishing out desserts at the outdoor Aqua Cafe at lunchtime. The guy hustling to get you drinks at the bar at Amici Lounge actually is the food and beverage manager, and you'll catch him waiting tables and supervising his team at dinner. Even the person who teaches your yoga class in the morning does double-duty, delivering excellent massages at the spa.

You quickly meet the crew and appreciate the genuine smiles. They deliver exceptional service. That's not necessarily an easy task, either, on a ship that caters to multiple nationalities, all with different expectations of what great service is. (The passenger breakdown on our sailing was about 75% Brits, and about 23% North Americans, with a handful of Aussies and Kiwis, too.)

On Emerald Azzurra, service walks the line between friendly and familiar. It's more relaxed than you'll find on more upscale brands, but it fits perfectly for a ship of this size. Still, the get-it-done attitude prevails; we watched as waiters immediately learned about a couple's food allergies, then delivered safe (and we're told delicious) options to them meal after meal. We talked about our preference for beer over wine, and, somehow, the team dug up a Belgian dubbel to serve us at dinner.

In talking with the crew, most have had experience on other smaller luxury brands, and when they heard about Azzurra, the were eager to work on an even more intimate ship. Some had worked together previously, even recruiting former colleagues. Everyone seemed to be empowered to solve any problems that arose.

The Food on Emerald Azzurra is Excellent

Emerald Cruises has been sailing the rivers of Europe since 2013. While the food on those nine riverboats is solid, it's not the most memorable thing about the line. Going into our sailing on Azzurra, we had tempered our expectations.

Color us surprised when we discovered that dining on Emerald Azzurra is consistently top-notch, with gourmet surprises at virtually every meal.

It turns out, Director of Food and Beverage Operations Chef Tom Goetter, who put together one of the best meals we've ever eaten on Scenic Eclipse (Scenic Cruises is Emerald's sister company), is now overseeing dining for both lines. The one-time runner-up on Germany's "Top Chef" is the visionary behind a menu that includes lots of seafood, a huge variety of innovative lunchtime flatbreads, hearty pastas and imaginative risottos.

While Goetter put together the menu, the execution is down to the culinary team onboard. On our sailing, Chef Li put his own spin on it during our sailing, even leading a small group of guests into a tiny Italian market in Crotone, where he picked out clams, mussels, octopus, cuttlefish, chilis and squash blossoms, among other fresh ingredients. (A native of the Philippines, Chef Li surprised passengers by negotiating in Italian; turns out, he's a former longtime employee of Italian cruise line Costa.) These gems made it onto the menus over the next couple of days, and it was a joy to see what he came up with from even the most rustic ingredients.

Another benefit of sailing on Emerald Azzurra is that the ship is able to get into some of the smallest ports. While we've been lucky enough to have visited Italy a number of times on cruises, this itinerary surprised us with a couple of charming new stops, including Amalfi, Crotone, Giardini Naxos (to get to Taormina) and Otranto.

We enjoyed exploring the old parts of these port cities, visiting the beaches and trying out restaurants. We also loved that Azzurra offers bikes that passengers can use -- for free -- ashore. The Gocycle bikes, retailing for about $4,000 each, offer e-assist, which we skipped in Monopoli but definitely put to the test on the switchbacks during a challenging ride into the hillside city of Taormina.

Some excursions are included in your cruise fare, while others come with an additional fee. We found our included excursion, a walking tour of Sorrento with a gelato tasting, to be just OK. It didn't feel much different from what you might get on the bigger ships, and we came away thinking we could have done much the same thing on our own. In talking with other guests, excursions seemed to be the one spot they felt didn't quite hit the mark. One couple we chatted with talked about a disappointing tour of Positano, which they said felt like a rushed experience that lacked the personalized touches they'd expect on a luxury cruise. We spoke with other passengers who expressed the same sentiment about their journey to Capri.

Still, if you're one who loves to explore on your own, the ports the ship visits are ripe for exactly that. And thanks to the small size of the ship, you'll have more time in ports. For example, many big cruise ships dock in Naples, and guests who want to go to Capri are in for an hour-plus ferry ride to the tiny island. Azzurra anchored off Sorrento, and it was less than 30 minutes by ferry to get to Capri. Likewise, we were able to walk right up into the old town of Sorrento. While there, we saw passengers from a bigger ship, who had to take a longer bus ride to get there, because their ship couldn't get close enough.

The Ship is Modern and Comfortable

The sleek, contemporary look of Emerald Azzurra isn't restricted to the exterior; it carries over to the ship's interior spaces.

All of the public spaces, except for the gym/spa, take advantage of natural light, with large windows creating a bright vibe. Our favorite spot was the Amici Lounge, which is decorated, like the rest of the ship, in shades of gray but offers pops of color thanks to bright throw pillows and flowering plants. The lounge serves as the spot to be pre- and post-dinner, where you can find low-key entertainment, like a guitarist/vocalist or the occasional karaoke session.

Cabins, too, are decked out in gray. They lack the color you'd find in the lounge and subsequently don't seem to offer the same warmth -- you won't find any art in most cabins. Still, they're nice-sized rooms that have the most comfortable beds we've ever slept in. We also were fans of the showerheads, which offered a variety of options, from streaming massage to light rain.

With more cruise yachts -- including a sister to this one, Emerald Sakara, due in 2023 -- coming in the next couple of years, Emerald Azzurra has set a high bar. For cruise fans looking for something a bit more intimate and luxurious with just the right amount of adventure, this could be the right fit.