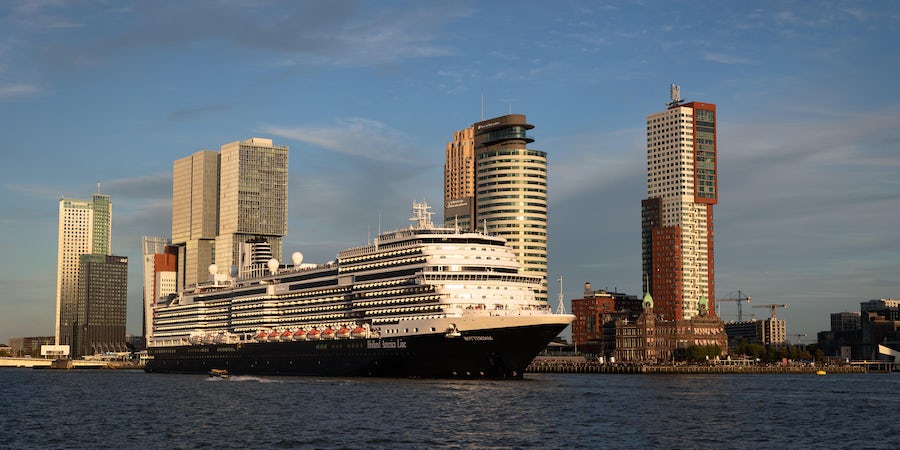 Holland America Line’s new Rotterdam, launched last fall and the seventh ship to bear the Rotterdam name, set sail on October 15, 2022, from Rotterdam, Netherlands on a historic transatlantic crossing designed to recreate the maiden voyage of Rotterdam I that sailed from Rotterdam to New York in 1872, exactly 150 years ago.

The new Rotterdam is following the course of that initial sailing, with stops along the way in Le Havre, France and Plymouth, England, before the ship is due to arrive in New York later this month.

"In that time, we’ve carried immigrants and cruising vacationers, soldiers and refugees and earned a reputation for extraordinary care and welcoming all those guests as if into our own homes. As we sail into our next 150 years, that environment of service will be our hallmark as we create exceptional experiences for guests around the world."

As is befitting a kickoff to a commemorative cruise, the sailaway festivities at Cruise Port Rotterdam and the park at Wilhelminapier featured both traditional and contemporary touches.

From his perch in a box hoisted up by a crane, a popular Dutch entertainer known simply as Frank In Person (F.I.P.) crooned “New York, New York” several times, and many other Frank Sinatra classics for the crowds gathered onshore and on the cruise ships’ decks.

Holland America’s Antorcha and dignitaries from the city and the port threw the first line holding Rotterdam to the pier. And, in a throwback to days when ships were sent off to great fanfare, the ship’s departure on Rotterdam’s New Waterway, a canal also celebrating its 150th anniversary, was accompanied by a flotilla of vintage steamships, modern yachts, and a fireboat spraying water.

Well-wishers waving white handkerchiefs gathered on shore in front of Rotterdam's Hotel New York, the iconic building that once served as the head office of Holland America Line (the company is now headquartered in Seattle.)

One of the most poignant times the new Rotterdam VII sounded its horn on departure was as it passed the 1959-built Rotterdam V, Holland America's former flagship that retired from the fleet in 1997 and now operates as a floating museum, restaurant, and hotel in its namesake city.

This commemorative transatlantic sailing will arrive in New York City on October 26 and conclude with a special ceremony, but there is also a thorough list of special events and activities taking place during the voyage across the Atlantic.

On the first day of the cruise, Martien Hoegen, chairman of "De Lijn," an organization of past employees and fans of Holland America Line debuted a temporary "Museum at Sea" onboard, showcasing souvenirs, historical photos, promotional items, and other Holland America Line memorabilia.

The exhibit includes models of the Rotterdam I, Rotterdam II and Rotterdam III vessels made by current Rotterdam captain Werner Timmers. In a LinkedIn post, Timmers said he made the models in the tradition of old sailors, "using scrap wood, toothpicks, clothes hangers, broomsticks, chopsticks, drumsticks and some other bits and pieces."

On the first night of this historic sailing, Rotterdam passengers received a limited-edition collectible tile to commemorate the voyage. The Dutch Delft tile was created for the Holland America Line by Royal Goedewaagen in the Netherlands.

In addition, the main dining room menu will be tailored during the crossing to offer at least one entree per night that is reminiscent of a dish that may have been served to passengers as far back as the 1920s.

However, on the second night of the cruise, every option on the menu, from the appetizers to the desserts was inspired by menu selections from Holland America's archive and included modern takes on traditional dishes featuring duckling, spinach and artichoke, beef tenderloin, and rack of lamb.

The First of Two Distinct Transatlantic Crossings for Holland America

Since that first voyage in 1872, Holland American Line played a key role in bringing about two million immigrants from Europe to the United States. Many current passengers on board this commemorative sailing have a personal link to someone who made their way to the U.S. on one of those early trips and they are already sharing those stories. A series of lectures about Holland America’s last 150 years by maritime historian and author Bill Miller is also on the agenda.