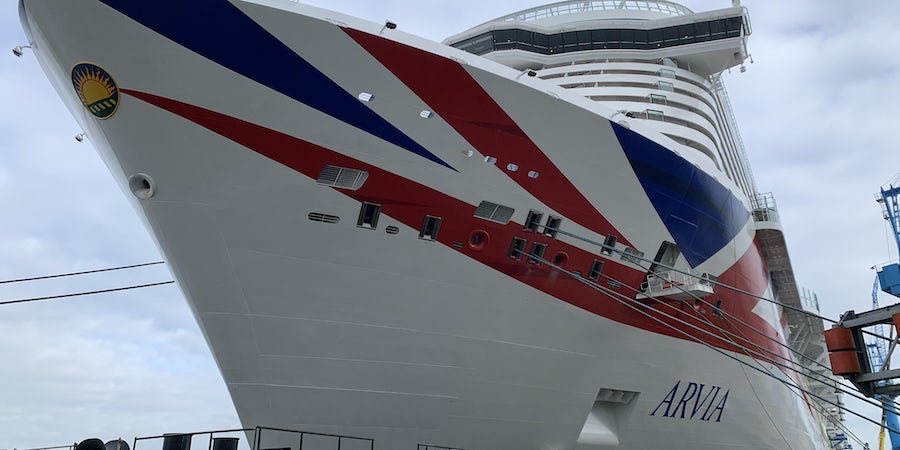 (4:30 p.m. BST) -- P&O Cruises' new ship Arvia is just two months away from its arrival in Southampton on December 3.

The 5,200-passenger sister ship to Iona is currently under construction at the Meyer Werft shipyard in Papenburg, Germany.

P&O Cruises invited selected staff, agents and press -- hosted by Arvia's Captain Robert Camby -- to get a sneak peek ahead of the ship's arrival in Southampton in less than two months' time.

"He was blown away by the elegance of the design and said it looked and felt like a London hotel. Imagine what he'll think when he gets on this ship."

Arvia has many of the same features which debuted on Iona -- as well as a few new-to-the-line features.

As Robert Scott, VP of brand, strategy, product who was also at the shipyard: "Arvia takes the best of Iona and builds on it."

And like Iona, Arvia is powered by LNG (Liquefied Natural Gas).

New features include Mission Control, the line's first Escape Room, which is decked out like a submarine. It replaces one of the four cinema spaces you can find on Iona.

Altitude Skywalk, a ropes course, right at the top of the ship, above a mini-golf course.

Anderson's Bar, which incorporates a run tasting area -- with the first rum distillery at sea -- following the line's link up with Tidal Rum.

Other stand-out features which debuted on Iona include SkyDome, a huge glass retractable roof over the main pool area.

And the stunning main atrium, seen here from Deck 6, where there will be a bar and a café.

In just a month's time Arvia will head backwards along the River Ems to the North Sea, where it will start sea trials, with Captain Camby -- who was previously captain of Iona -- at the helm.

The handover ceremony from the yard to P&O Cruises will take place on December 1, after which Captain Camby will sail the ship to Southampton.

Arvia arrives in Southampton on December 3, ahead of her maiden voyage to the Canaries on December 9. Arvia will be based in Bridgetown, Barbados, until late March before sailing back to Southampton for the summer, operating Mediterranean cruises until October.

There is no date set for the christening.