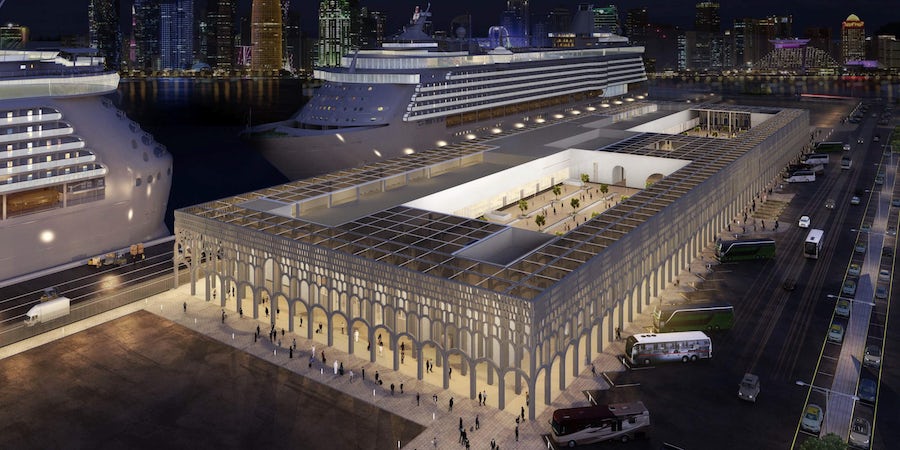 Qatar Set to Welcome 120 Cruise Ships And Up to 200,000 Passengers Next Season

The tiny Gulf state is spending billions on attracting cruise ships with the construction of a multi-million pound terminal, which will open a week before the start of the FIFA World Cup in November.

The opening will coincide with the naming ceremony of 6,774-passenger MSC Cruises' newest and biggest ship World Europa.

MSC Poesia joins World Europa -- with MSC Opera nearby -- for the World Cup (November 20-December 18) offering official accommodation that can be booked by fans through FIFA. Privately chartered Emerald Azzurra and a couple of Ponant ships will sit nearby.

Then the terminal's business grows steadily.

"We're bringing in cruise lines such as MSC Cruises and Costa. Ponant Le Bougainville has a short season here, Windstar is coming next winter and Silversea in 2024-25. We are also developing plans for berthing for smaller ships in the Mina district.

"Part of our strategy is to have cruise line executives visit Qatar -- most have never been here – to showcase why we could be their turnaround or home port."

Qatar's Cruise Terminal Can Handle Two Ships And 7,000 Passengers At Once

Qatar's astonishing new cruise terminal is quietly revealing itself as its November 13 opening.

It's currently a whirlwind of activity as work hurries on to finish the extravagant interior -- guests will have an amazing arrival and exit via glass tunnels through the biggest aquarium in the Middle East.

The long, elegant structure in Arabic style with 1,174 arches sits at the end of a long, wide pier-like road that's marked by ornate lamps.

The 800m pier will fit two large ships; twin entrances will each be able to cope with 7,000 visitors.

To one side of the approach road a public promenade has panoramic views across the curving Corniche coast and high-rise cityscape.

Halfway down the road makes a sharp at the Mina District, a new but ancient looking stretch of jumbled pastel-coloured buildings that will be shops, restaurants, a boutique hotel and apartments. A grand hall will house a fish market with restaurant.

The terminal is a 40-minute walk from the waterfront park setting of the Museum of Islamic Art, designed by American architect IM Pei and reopening this autumn after lengthy reimagining. A little farther is the National Museum of Qatar which opened as Covid hit, a breathtaking architectural feat based on the shape of a sand rose, as striking inside as out.