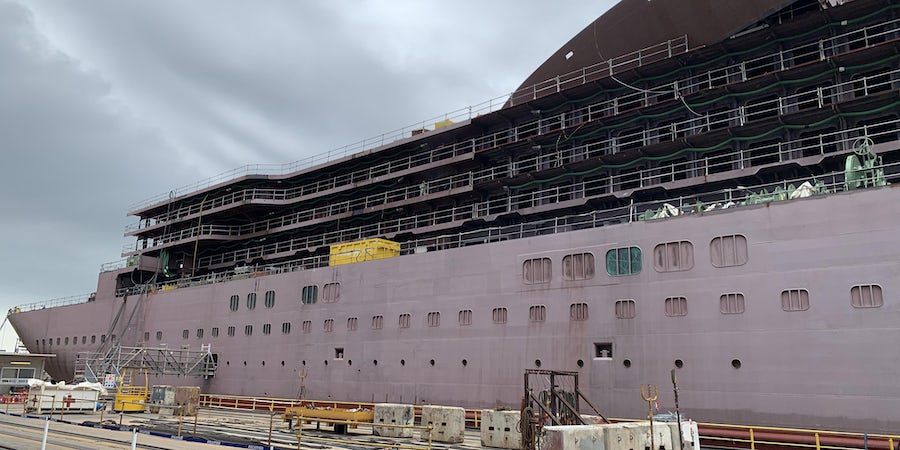 (7:07 a.m. EDT) -- Cunard Line laid the keel for its new ship, the 3000-passenger Queen Anne, at the Fincantieri shipyard in Venice today.

Captain Inger Klein Thorhauge first welded the ceremonial coin into the keel before a massive crane hauled the centerpiece of Queen Anne, laying it in place beside the superstructure of the new vessel.

The "laying" of the keel is a key milestone in the construction of a ship, marking the official first step in the building of a ship and is celebrated with a ceremony attended by officials from both the cruise line and the shipbuilding company.

The new ship, which will be completed at the end of next year, will go into service in early 2024.

"Over the last three years world-leading designers have worked with master ship builders here at Fincantieri to design this ship that reinforces our decision to be a world-famous luxury brand across all continents," said Carnival UK President, Sture Myrmell at the ceremony.

Queen Anne Cruise Ship "Will Be Enjoyed For Many Generations"

"Queen Anne will be enjoyed for many generations to come and we are really looking forward to welcoming her to our fleet."

Queen Anne is the first new ship from Cunard since Queen Elizabeth launched in 2010, and will bring the fleet to four for the first time since 1999.

Queen Anne's design draws on Cunard's Art Deco past and will be a homage to the "Golden Age" of travel.

The ship will have Cunard's first two-deck, 825-seat Royal Court Theatre inspired by the great theaters of the world, with sumptuous fittings and velvet seating.

The ship will have 15 restaurants, including the main dining room Britannia Restaurant, which is on all the line's ships -- and the popular Golden Lion pub, which serves bar food.