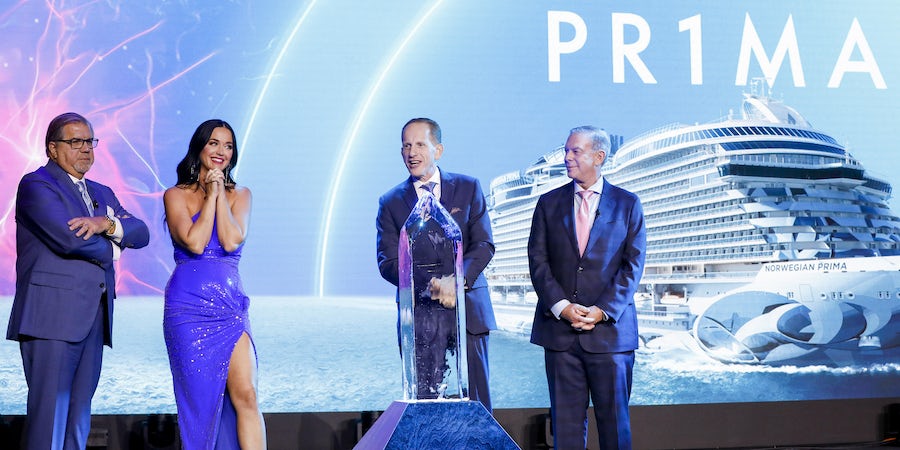 Colleen McDaniel
Editor-In-Chief
(Updated 10:30 a.m. EDT) -- With about 2,500 people onboard for the inaugural cruise, godmother Katy Perry named Norwegian Prima in Reykjavik. In so doing, Norwegian Prima became the first mainstream cruise ship to be christened in Iceland's capital city.

Norwegian never does anything small, and its celebratory christening Saturday night of its newest cruise ship Norwegian Prima was certainly no exception.

Drawing huge applause from a crowd comprising media (including Cruise Critic), VIPs, NCL and shipyard executives, past guests and travel advisers, Perry took the stage and talked excitedly about the opportunity to be the godmother, singing the praises of the brand and the ship. (It was impossible to miss the excited crew members, who lined the back of the three-level Prima Theater & Club, where the event was held.)

"I hereby name this ship Norwegian Prima. God bless her, and all who sail upon her," she said, reciting a take on a traditional cruise blessing, before pressing a button and sending a bottle of Champagne smashing against the hull of Prima (the audience was able to view the bottle drop broadcast on the theater's big screen).

The deed done, Perry spoke briefly about the ship and how special it felt, including an anecdote about celebrating her daughter Daisy's second birthday the night before in the ship's Haven, an enclave reserved for suite guests. Actor-husband Orlando Bloom was onboard to celebrate his wife's honor. She also talked about her cruising experience, which is limited.

"I've actually never been on a proper ship. It's gorgeous. And I would never do it for anyone else …" Perry said before Del Rio broke in:

"You're not allowed," he quipped.

The christening ceremony, a long-time maritime tradition thought to bring luck to the ship and its passengers and crew, was not only a celebration of the new 3,100-guest Norwegian Prima but also a bit of a coming out party after a long pandemic that completely shut down the cruise industry from March 2020 till summer 2021. While ships have been sailing for more than a year now, the industry still is recovering.

Indeed, this is the first big event for NCL since the pandemic began, and it felt like times of old for a cruise line that has brought in godparents like Kelly Clarkson, Pitbull and the Rockettes.

Sommer reminded the crowd, assembled in the theater and watching on screens from around the ship, that the last time he gathered for an event like this was when Norwegian Encore was christened in 2019.

Del Rio himself was exuberant talking about the promise Prima represents.

"We're going to use the word celebrate a lot tonight, because there's a lot to celebrate," Del Rio said

"Collectively, we faced one of the most difficult periods we'll ever see in our lifetimes."

The event was a fun and spectacular way to celebrate a new ship and potentially a resurgence of the industry. Icelandic synth-pop star, Dadi, performed mid-ceremony, Sommer and Del Rio took the stage, thanking loved ones, partners, colleagues and crew, and a rabbi and bishop performed traditional (and not-so-traditional) blessings, and cruise director Simon Akinwolere.

Perry finished the evening an hour-long powerhouse performance featuring a hit parade of her famous songs and had the crowd dancing and singing along.

Norwegian Prima Sets Standard for What's Next from NCL

Norwegian Prima is the first ship in the Prima Class, the much-anticipated follow-up to the popular Breakaway/Breakaway-Plus class of ships.

In describing the new ship, Sommer called it, "the pinnacle of everything our 55-year-history has been preparing us for."

The Prima Class ultimately will have six cruise ships, with Norwegian Viva set to debut next, in August 2023.

Highlights of Norwegian Prima include a beautiful, multi-story central atrium, Indulge Food Hall, which combines nine restaurants/food trucks into one immensely popular eatery (get there early to grab a seat), a three-level go-kart track and impressive Ocean Boulevard, a 44,000 square foot outdoor walkway around the entirety of Deck 8. It expands upon some of the innovation found in the previous class, including a large and impressive private Haven suite complex, the virtual-reality Galaxy Pavilion and seamless integration of indoor/outdoor spaces.

The christening event kicked off a weeklong sailing that ends September 3 in Amsterdam, with port stops along the way in Cork, Ireland; Portland, England; and Le Havre, France.

Prima, which sports hull artwork by Italian graffiti artist Manuel Di Rita, sets off on its inaugural voyage to Northern Europe from the Netherlands, Denmark and England on September 3, then heads to the U.S., where it will homeport in various spots, including Port Canaveral, Miami and Galveston.