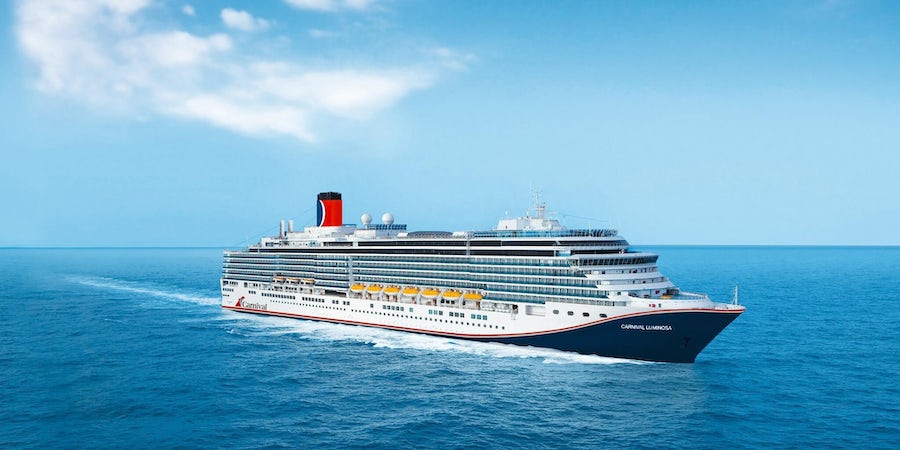 (3:30 p.m. EDT) -- Carnival Cruise Line has released itinerary details for Carnival Luminosa as the line prepares to welcome it into its Fun Ship fleet, including sailings to Australia, Alaska, and a spectacular 30-day Transpacific Crossing in September 2023. The line has also revealed the ship will be newly-painted in Carnival's new livery introduced aboard Mardi Gras last year.

The former 2,826-passenger ship recently acquired by Carnival from Costa Cruises as Costa Luminosa will embark on its debut voyage for Carnival on November 6, 2022, from its homeport in Brisbane, Australia.

Spending its inaugural winter season in Australia, Carnival Luminosa will sail on itineraries ranging from 3 to 11 days out of Brisbane to various destinations in the South Pacific, Australia, and New Zealand.

The ship will then cross the Pacific Ocean on April 13, 2023, on a 22-day journey to Seattle, from where it will kick off its inaugural Alaska season with roundtrip seven-night voyages beginning May 11, 2023. Ports of call on Carnival Luminosa's Alaskan cruises include Juneau, Haines, Skagway, Icy Strait Point, Ketchikan and Victoria, Canada, along with scenic cruising in Tracy Arm Fjord, depending on departure date.

In September 2023, Carnival Luminosa will embark on a 30-day Transpacific Crossing -- one of the longest sailings Carnival offers -- for a second Australian season, homeporting again in Brisbane. But instead of heading south, Carnival Luminosa heads north, sailing to Alaska and Japan before arriving in Australia It replaces Carnival's former Australian-based vessel, Carnival Spirit, which will now winter in the Caribbean and summer in Alaska.

(Click here to read our review of Carnival Spirit in Alaska)

A modified Vista-class ship, Carnival Luminosa shares some basic design similarities with Carnival Legend, Miracle, Pride and Spirit. In a release Tuesday, Carnival also confirmed Carnival Luminosa will receive the line's new red, white and blue livery (previous renderings of the ship have not shown this). The ship won't, however, be retrofitted to include Carnival's signature "whale tail" funnel.

It is not known, however, if Carnival will retrofit Carnival Luminosa with the line's signature features, such as the Alchemy Bar, RedFrog Pub, Guy's Burger Joint and BlueIguana Cantina, among others.

Itineraries aboard Carnival Luminosa are now available for booking.