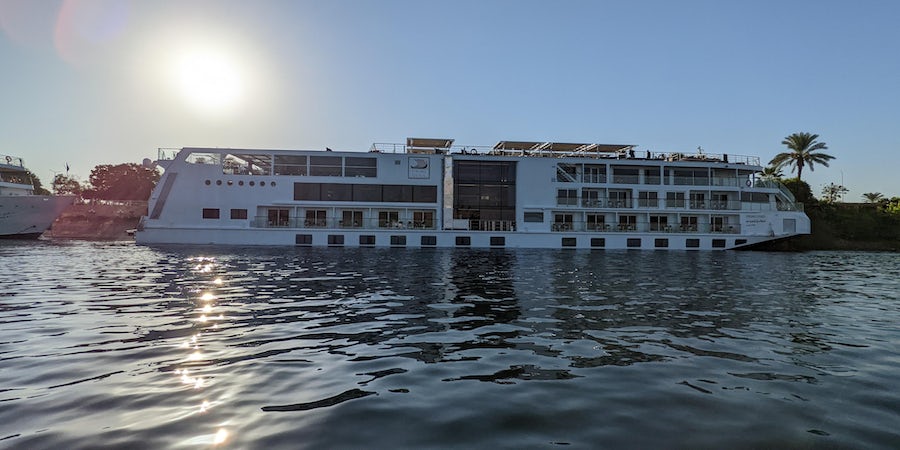 Live from Viking Osiris: A Luxury Cruise on the Nile River

(12:30 p.m. EDT) -- Viking is no stranger to sailing the Nile: The cruise line long has chartered ships from other companies to sail Egypt's famed river, and in 2018, it launched Viking Ra, a ship it took down to its studs and refurbished to match the line's trademark Scandinavian style.

But with the August 2022 debut of Viking Osiris, the company has created its first purpose-built ship for the region. This is significant as Viking owned every part of the process, from design to launch. The result is an immaculate, state-of-the-art river boat that feels like a Viking ship leveled up for this distinct region of the world.

We're onboard Viking Osiris as the 82-passenger river cruise ship sails its maiden voyage, roundtrip from Luxor, Egypt. Here's what it's like.

Viking Osiris Embraces its Ties to the Past

It's fitting that Viking Osiris launched on the cusp of the 100th anniversary of British archeologist and Egyptologist Howard Carter's discovery and subsequent excavation of the virtually intact King Tutankhamun's tomb in November 1922.

After all, Viking has deep ties to the 8th Earl and Countess of Carnarvon, who reside in Highclere Castle, where PBS' iconic Downton Abbey was filmed. The Earl, George Herbert, is the great-grandson of the 5th Earl of Carnarvon, who was Carter's benefactor. The ship's art collection is made up of photos and art from the family's collection. The 5th Earl was a photographer of some renown, and he captured work at the tomb as well as simply daily life in Egypt.

(Viking was a sponsor of the Masterpiece TV show when it aired, and executive Vice President Karine Hagen and Lady Carnarvon have been friends for more than a decade.)

Fittingly, Herbert is the ships godfather, naming the ship in a ceremony on August 22 while Viking Osiris was docked across from the Valley of the Kings in Luxor.

The short but personal christening ceremony, a maritime tradition said to bring luck to the ship and its passengers and crew, concluded with a twist on Viking's usual breaking of a bottle of Gammel Opland aquavit on the hull. Herbert pressed a black button that released a bottle of nonalcoholic Champagne, out of respect to Egypt and its history and customs.

Ahead of the christening, invited guests visited the Carter Castle, where Howard Carter lived during the excavation. The home serves as a bit of a museum, where you can see Carter's living quarters, tools, furniture and more.

A point of Viking pride is that passengers on all its ships will find they are similar, whether it's a European river boat, or one of Viking's oceangoing vessels or its new expedition ships, Viking Octantis and Viking Polaris. The design is the common theme, relying on a simple, Scandinavian concept that feels fresh and modern.

You'll find this same approach on Viking Osiris, though nods to Egypt are part of the ship's makeup. It's obvious in some places: those black and white photos of the Earl of Carnarvon, Carter and the excavation of King Tut's tomb. In other spots, its more subtle. For example, screens in the Restaurant were inspired by traditional Egyptian basket design, the kind you might find in local markets.

It all works. Viking Osiris might very well be the most luxurious ship sailing the Nile. Public spaces are comfortable, with lounges that look out onto the Nile through floor-to-ceiling windows. Natural light permeates every spot, with open staircases and even skylights.

"This whole ship was based on that concept," Richard Riviere, whose Rottet Studio has designed some 50 ships for Viking, said of embracing the sunlight.

Cabins are perfectly appointed, with even the smallest offering room to simply sit and watch the world go by in comfort.

Viking Osiris even has a small, infinity-style pool at the aft (back) of the ship, just off the Aquavit Terrace, a cruise line staple that serves as a light-and-bright indoor/outdoor space.

We're sailing a bit of an abridged Nile itinerary. Most passengers on Viking Osiris will end up on 12-night Pharaohs & Pyramids itinerary, which brings passengers in early for three days of exploring in Cairo -- where you'll see the Great Pyramids, the Sphinx and the country's incredible Egypt Museum. Guests then head to Luxor, where they'll board the ship, which serves as home base while they explore the incredible Valley of the Kings before sailing to destinations like Esna and Aswan.

On our sailing, we did see the incredible highlights in Cairo during truncated visit, with time at the Pyramids as well as the museum, which features more than 200,000 antiquities. (We visited the current site, which is slightly sparse, as many are moving to the $1-billion Grand Egyptian Museum, opening this fall.)

A charter flight brought us to Luxor, where we jumped right in and visited the Valley of the Kings, where the tombs of 63 pharaohs -- including King Tut -- are located. (All Viking guests will take a chartered flight between Cairo and Luxor and back.)

No doubt the pinnacle of our journey so far has been a hot-air balloon excursion over the Valley of the Kings, which set off at 4 a.m. so we could see the sun rising over this one-of-a-kind destination. This extra-cost shore tour is a must for any passenger who wants to see this area in a fully different way. (It's not for those squeamish about heights or those who are especially prone to motion sickness, exacerbated by heat.)

We also visited the temples of Luxor and Karnak, both filled with beautifully maintained and restored columns and hieroglyphics. It's easy to feel small in these grand temples.

Those who do the Pharaohs & Pyramids journey also can add-on a shore tour to Jordan. Itineraries start at $5,800 per person (for offseason sailings) and jump to $7,500 during the high season, which runs from November to May. (Summer sailings, like ours, are excellent, but hot -- we saw 110 degrees Fahrenheit (43 degrees Celsius) in Luxor.)

What's Next for Viking in Egypt?

It doesn't appear that Viking is slowing its growth anytime soon. During a media briefing on August 22, Viking Chairman Torstein Hagen announced the line will add two additional ships to the Nile: Viking Hathor will debut in August 2024 and Viking Sobek starts sailing August 2025. These ships are in addition to already announced Viking Aton, set to debut in 2023.

Based on bookings for Viking Osiris -- Viking's website shows more "sold out" than "available" cruises for the foreseeable future -- demand for the Nile is high, and four, identical 82-passenger ships might just serve that need.

Viking's partnership with Egypt, which Hagen praised at his briefing, means these ships will be built at the Massara Shipyard in Cairo. It also means Viking's ships can berth alongside the shore in Luxor -- a premium on a river where often boats tie-up alongside one another, so guests have to walk through several boats to get ashore.

The blending of history, culture and the river fits into Viking's approach to travel, which Hagen long has called "the thinking person's cruise." Onboard, passengers will be treated to lectures about the region, and the cruise program directors literally make the experience for guests. These people serve as onboard guides, coordinating all excursions and onboard activities. Ours, Hanan Elbeih, is a spunky Egyptologist whose extensive knowledge of history is exceeded only by her passion for sharing that knowledge. The other guide on our journey, Salah Tawfeek, is equally friendly and knowledgeable, though we've had less exposure to him as he's been leading another group from our ship. (Group size is specifically limited, to keep them small and nimble enough so as to avoid waiting at sites like temples and tombs. You're assigned the same program director for the entirety of the cruise, though lectures might be handled by one or more.)

With a modern ship and excellent, well-paced programming, Viking expects it to be a formula for success for the cruise lines future in this part of the world.