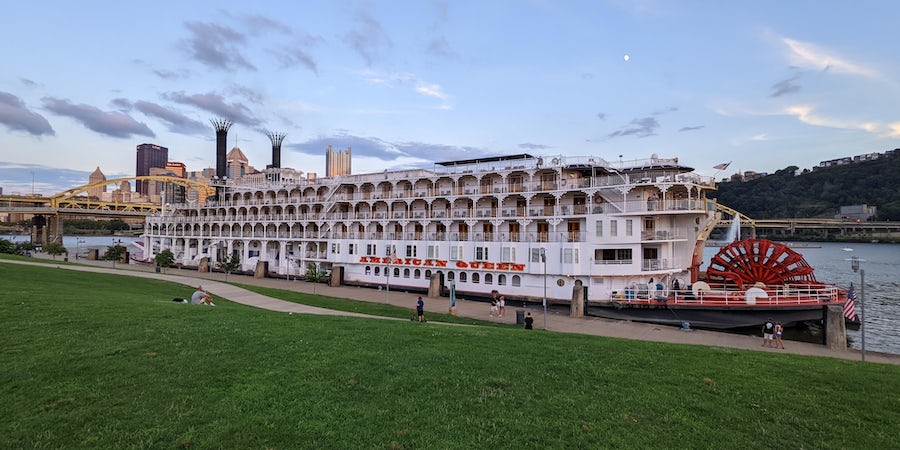 Cruising on the Ohio River: Just Back From American Queen

(10:15 a.m. EDT) -- If the thought of flying overseas has you feeling a little skittish these days -- because of massive flight delays and cancellations, for starters -- a journey closer to home might be just what you're looking for. A number of cruise lines, including American Queen Voyages, American Cruise Lines and Viking, offer sailings on several rivers across the United States.

While the most popular might be a Mississippi River cruise, you shouldn't discount a journey on some of the lesser-known and incredibly vibrant rivers. Veteran river cruisers will tell you that a hidden gem is the mighty Ohio River, which flows from Pittsburgh to Cairo, Illinois, where it joins the Mississippi.

We're just back from a sailing onboard American Queen, the flagship of American Queen Voyages, where we traveled from Pittsburgh to Louisville with stops in Marietta, Ohio; Huntington, West Virginia; Augusta, Kentucky; Cincinnati and Madison, Indiana. Here's what you can expect on an Ohio River cruise.

Pittsburgh is a Fun and Fascinating Place to Start

If you're cruising with American Queen Voyages, a precruise stay is included with your fare, and many guests will extend it longer. The company even offers a city tour on embarkation day for those who want to explore a bit more in-depth.

The cruise begins in the heart of downtown Pittsburgh, and the hotel for guests is near enough to the port, parks and other points of interest around the river to keep you busy with interesting activities. Some passengers took an American Queen Voyages tour of Pittsburgh, which includes visits to John Heinz History Center and a look at the inner workings of the city's famous Duquesne Incline, a 145-year-old incline car that gives riders the best views of the city and the confluence of three rivers, the Ohio, Allegheny and Monongahela, and the many pretty bridges that span the waterways.

Others explored on their own, visiting the Andy Warhol Museum or walking some of the miles of trails that line the rivers, taking you past Acrisure (formerly Heinz) Field and PNC Park, homes of the Steelers and Pirates, respectively.

A small, big city (or is it a big, small city?), Pittsburgh offers a vibrant dining and bar scene, as well.

If you're doing the reverse of this itinerary, you'll likely start in Louisville and finish in Pittsburgh. Louisville, like Pittsburgh, if a fascinating city with plenty to do. Guests can book pre- (or post-) cruise tours here, as well, such as getting a private tour of Churchill Downs -- site of the Kentucky Derby. Those who explore on their own might take a swing by the world-famous Louisville Slugger Museum and bat factory.

Many of the guests on this itinerary will be veteran American Queen Voyages cruisers. They'll let you know as soon as you shake their hands, often starting the conversation with, "Is this your first time on the Queen?"

Spend some time with these folks, and you'll learn a lot about the ship, the itinerary and the crew.

It speaks to the passenger base, which tends to be older -- typically, 70s and up -- and is among the friendliest we've encountered. Conversation comes easy, and you'll hear tales of the many cruises they've taken and why they keep coming back to AQV and American Queen in particular. (Many of our fellow cruisers were on back-to-back voyages or even three weeks in a row all the way up to Red Wing, Minnesota.)

On our sailing, several passengers rued the fact that this was the last upper Ohio River sailing on the line's flagship for the foreseeable future. (Sister ships American Duchess and American Countess are taking over this one for the next couple years.) But fear not! American Duchess and American Countess have the same feel as the grand American Queen (down to the distinctive red paddlewheels mounted to the stern), but many die-hard fans have loyalty to the first and biggest ship in the fleet.

We were surprised by the number of passengers on this sailing who lived close to or in some of the ports we were visiting. They said they simply love being on the rivers, and it was a bonus to have a "home port" stop. (One passenger from Cincinnati stayed on the boat when the ship stopped there, instead enjoying free reign of a mostly empty vessel.)

Food is Divine and Draws from Ports Visited

A shining spot for American Queen Voyages is the onboard cuisine, in part because of its partnership with noted Natchez-based chef Regina Charboneau, the line's culinary ambassador and biscuit queen.

On our voyage, dishes drew from virtually every area the fleet visits, with incredible jambalaya inspired by New Orleans flavors, cheese curds (a Wisconsin staple) and creamy shrimp and grits. We rarely skipped a course at dinner time, and always left the dining room happy.

Many of the crew, too, come from port cities along the Mississippi River. Interestingly, a number of residents in the ports we visited came out to see the boat and even approached to ask crew members how they could get a job working on a riverboat.

AQV, though, is suffering from some of the same supply chain and worker shortage issues other cruise lines -- and pretty much all businesses on land -- are seeing. On our voyage, that manifested itself with ingredients -- cheese and avocados, for example -- running out. It also showed in the service, which was mostly friendly but definitely green: It's clear a number of people were taking on new jobs without a ton of training.

Many staff members reacted with enthusiasm, but some had us feeling a bit like asking for service was going to put them out. (We loved one bartender who, between helping guests, was reading a guide to drink making and talked of how he dreamed of moving up in the company; we couldn't wait to visit him each day.)

The Ship Draws a Lot of Attention

One of our absolute favorite things about sailing on American Queen was pulling into and leaving ports. It turns out, the ship's arrival is an event for the people who live in the port towns.

Crowds greeted the boat as it pulled in, with onlookers holding up their phones to grab photos and videos of the ship making a 180, pulling in and tying off. In Augusta (hometown of actor George Clooney and his aunt the late entertainer Rosemary Clooney), a food and music event took place at the same time, just steps from the boat, and signs hanging in restaurants and bars announced the date of the ship's arrival and also noted when Duchess and Countess would visit later this year.

Visiting town, we were asked by everyone about the riverboat: "What's it like on the inside?" and "How much does it cost to sail?"

Perhaps the most magical part was when we said goodbye. As the riverboat prepared to set sail, one of the ship's musicians sat down at the calliope to play jaunty tunes like "Take Me Out to the Ballgame" or "Daisy Bell," finishing with "God Bless America." I admit, the first time I heard the steam-powered calliope, it sounded a little … er … creepy. But seeing the crowd light up from ashore made me come around quickly. I looked forward to the tunes every day, taking the cue to head to the railing and wave goodbye to the throngs gathered.

This itinerary includes a number of locks, too, and it was stunning to see people ashore and onboard gather to view the boat transiting them. During the day, a lock transit comes with the calliope as well. (We're told on upper Mississippi trips, the locks are so close to shore that passengers can toss beads and candy to the looky-loos.)

A sailing on the Ohio River is a surprisingly wonderful way to learn about a region that, frankly, we hadn't given much thought to before our journey. The ports visited are charming, the people are bright and inquisitive, and the riverboat is the perfect way to leisurely explore while feeling pampered along the way.