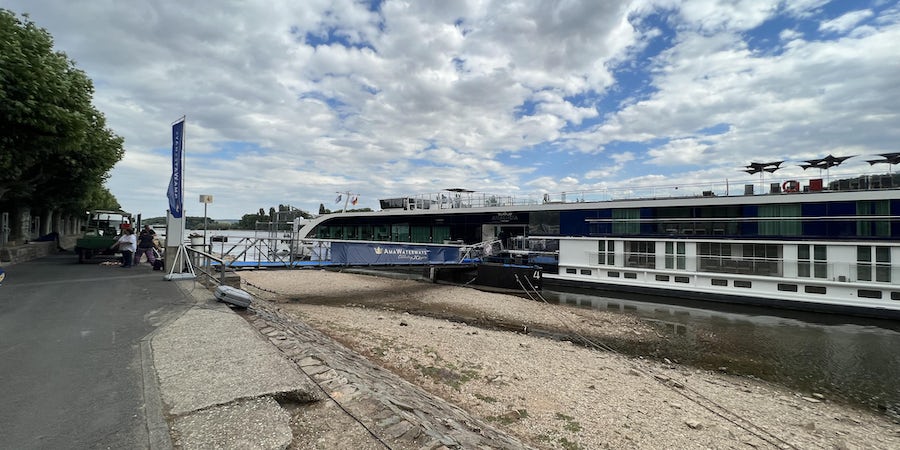 (12:20 p.m. EDT) -- Shrinking water levels on Europe’s drought-stricken Rhine and Danube are forcing river lines to cancel or alter their itineraries or implement ship swaps, but operators say they are hoping for a return to normal cruising if predictions hold true for rain at the end of the week.

"It’s getting bad," AmaWaterways co-founder and president Rudi Schreiner told Cruise Critic. "It started a little bit of rain today. It seems there might be a lot of rain on Friday. Hopefully it doesn’t go away. The forecasts are very positive. If that happens, then we should get back to normal water levels."

But forecasts can change quickly. For now, AmaWaterways -- whose ships have some of the lowest drafts in the industry, allowing them to continue sailing through lower water than most -- began swapping passengers last week between sister ships AmaLucia and AmaSiena, which sail in opposite directions on the Rhine.

In that case, passengers get off the ship before the impassible area around the German town of Kaub in the Rhine Gorge south of Cologne for a day excursion. Then, at the end of the day they are taken to the sister ship, where their luggage has been transferred to an identical cabin.

Meanwhile, competitor Avalon Waterways says it has also had to make some changes on Rhine and the Danube cruises.

"As of now, re-routing cruise sailing itineraries has not been necessary," said Steve Born, chief marketing officer for the Globus family brands, which owns Avalon. "In the vast majority of cruises, we’ve been able to maintain the components of the itinerary with moving to another Suite Ship.

"In a handful of cases, the changes were extensive enough that we decided to cancel the cruise with re-book or refund options for guests. Our goal is to always do what’s right for our guests and to keep the experience intact despite the changing conditions. When that isn’t possible, we won’t ask guests to compromise their vacation."

Emerald Cruises likewise said it has altered some of its itineraries, for instance moving its new Emerald Luna to sail the Dutch and Belgian waterways instead of the traditional Amsterdam to Basel itinerary on the Rhine.

"The river conditions can change significantly, depending on rain fall and other local factors," the company said in a statement last week. "Thus, we are adjusting guest travel arrangements when required and altering some river cruises to allow for the safe navigation of our ships. This is to ensure the minimal disruption to our guests experience and itineraries."

Viking, the largest operator of European river cruises, did not immediately to a request for comment on how its sailings have been impacted. But a statement posted to its web site on Aug. 3 indicates it, too, has implemented ship swaps "to minimize the impact" on guest itineraries.

Danube River Cruises Could Be Affected Near Budapest

Though the critical situation on the Rhine is generating far more publicity, areas of low water on the Danube have prompted slight alterations to ports of call for AmaWaterways, Schreiner said.

But if things get worse, the Hungarian government could shut down sailings into Budapest, Schreiner told Cruise Critic. That would force lines to put passengers in a hotel in Budapest and bus them to and from other ports about an hour’s bus ride away, or from Bratislavia, Slovakia. That means guests would miss one of the key highlights of Danube cruises: sailing past its landmark Parliament building, which towers over the eastern banks of the Danube in the heart of Budapest.

Despite the current challenges, Avalon's Born emphasized that "to keep things in perspective, on the rare summer conditions where low waters are a problem, the issue is temporary, affecting a very small percentage of river cruisers."

The last time drought conditions disrupted river cruising and commercial shipping in Europe to this degree was in the fall of 2018, when river cruise lines were forced to cancel a number of Rhine cruises or reroute them to Dutch and Belgian waterways.

Still, while fluctuating water levels have long been a normal part of river cruising, increasingly hot summers and more frequent droughts are prompting some operators to rethink some summer itineraries and to keep alternate plans at the ready.

"It’s getting more severe," said Schreiner. "In the past four or five years I have adjusted itineraries more and more to avoid the high temperatures in the summertime."

For instance, he says, AmaWaterways is eliminating 14-day sailings from Amsterdam to Budapest because of issues getting through the Main-Danube canal when water levels drop in the summer. Rerouting more cruises from the Rhine to the Moselle is also on option, he said.

"The key part is that the Rhine has no damn, which means it cannot hold the water back," he said.

In amongst this uncertainty, there is some good news: not all rivers in Europe have been affected. While cruises on the Po in Italy have also been disrupted by low water, Schreiner said rivers in France are still doing well, Portugal's Douro River is normal and the Elbe is "surprisingly higher" than the past few years.

What Can Passengers Booked on Upcoming River Cruises Do?

Passengers booked on upcoming Rhine and Danube river cruises should monitor their email for updates from travel advisors or the cruise lines themselves, and keep an eye on the weather forecasts. With water levels expected to drop to just 31 centimeters (12.2 inches) this week on the Rhine near Kaub, the potential for increased disruption remains.