You may also like
Dismiss
Just Back From Hurtigruten's Finnmarken: The First Cruise Ship to Set Sail, Post-Covid
Norwegian, Royal Caribbean Team Up To Create Cruise Health and Safety Protocols
Cruising the Newest Ship Afloat: Live From Celebrity Apex
Live From Royal Caribbean's Odyssey of the Seas: Why You'll Never Be Bored on This Cruise Ship
Disney Wish To Feature New Onboard Entertainment Firsts from Disney Cruise Line
NCL Reveals More Dining, Design Details on New Cruise Ships Norwegian Prima and Norwegian Viva
These Ships Are Coming Back To The U.S. in 2022: Here’s Why You Should Care
Live from Grandeur of the Seas: The Beloved Lady G Cruise Ship Still Reigns
Just Back From Allure of The Seas' Maiden Galveston Sailing: Hits and Misses 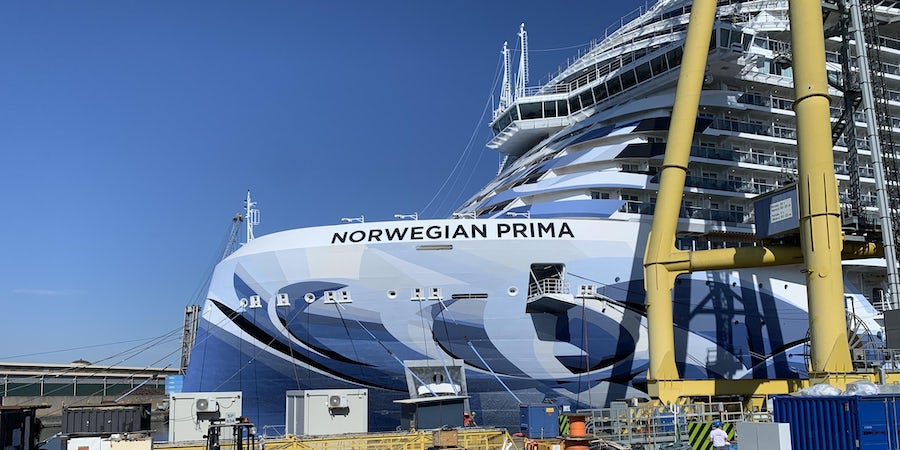 Norwegian Prima is Delivered: Our First Impressions From the Shipyard

(12:45 p.m. EDT) -- Take away the water slides and the three-deck racetrack and the vast casino, and you'd be hard-pressed to find anything on Norwegian Cruise Line's newest cruise ship, Norwegian Prima, that says, "mainstream cruise ship".

From the three €70,000 chandeliers in the upmarket French restaurant, Le Bistro; to the sculptures by Alexander Krivosheiw along Ocean Boulevard to the exquiste gold butterfly installations that adorn the ceiling in Hudson's, one of the ship's main dining rooms, Norwegian Prima has the look and feel of a Four Seasons or Ritz-Carlton hotel.

Which was exactly the intention, as President and CEO of Norwegian Cruise Line Holdings Frank del Rio -- who was at today's handover ceremony in Venice -- explains:

"We're going to create a contemporary category vessel that if I blindfold you and drop you in, you'd be hard pressed to know if you were on Oceania upper premium ship or if you are on a Regent ultra-luxury ship -- and I think we've succeeded in doing that."

Cruise Critic was lucky enough to get a sneak peek of Norwegian Prima -- and sister, Norwegian Viva, being built right alongside -- at the Fincantieri shipyard near Venice.

Norwegian Prima Has The Look And Feel of a Luxury Ship

Norwegian Prima is by no means small, carrying 3,300 passengers at double occupancy. That may not put it in the mega-ship category, but it certainly classifies it as a big cruise ship.

However, once you step onboard, you'd be forgiven for thinking you have stepped onto a luxury vessel.

It's not just the design details noted above, but it's the space that's prevalent throughout. NCL has long-claimed that Norwegian Prima will have the largest guest space ratio of any contemporary vessel -- and it shows (admittedly, we were on a shipyard tour, and we may have to revisit this claim on an actual sailing.)

But take for example, Ocean Boulevard, the expansive promenade deck pioneered on the line's Breakaway class -- here it is double the width of those 4,000-plus passenger ships, so by design Norwegian Prima's outdoor deck space will feel less crowded.

As well as the bars and restaurants that line Ocean Boulevard, Norwegian Prima extends the deck space out further to include lounge chairs, art installation, and an infinity pool on either side. Plus, Ocean Boulevard wraps right round the vessel, which will please cruise purists that love the traditional promenade decks found on older shps.

It's the same with the inside space aboard Norwegian Prima: larger corridors, larger public spaces and (according to NCL; we didn't see any), the largest cabins of any NCL ship.

The Atrium Aboard Norwegian Prima is Like Nothing We've Seen Before

If there is one aspect of this ship that really stands out, it is Norwegian Prima's triple height atrium. All public room corridors lead from this space, stairs rise sinuously to each floor and the ceiling is studded with lights in the shape of twinkling stars, a nod to how ancient explorers navigated, according to the designers from Miami-based Studio DADO.

Drawing inspiration from squares and plazas around the world as well as, specifically, the atrium of the Hyatt Regency Atlanta (it's breathtaking) -- the duo has created a space that you genuinely won't find on other cruise ships for one key reason -- it's asymmetrical.

"It's a structural feat to cut a hole in the middle of a ship," designer Greg Walton explained. "But to cut a hole that is asymmetrical -- you must be crazy."

Which is exactly why they've designed it that way, and why it feels like you've discovered it, almost as if you've stumbled upon it -- as you would a square in an ancient European city, after winding through narrow winding streets with no idea what lies at the end.

Balconies jut out randomly, stairs bend up and round from different points, glass curves and flows across each floor and the lights are ever-changing.

It's a place to meet for a coffee, to stroll through en route to a bar or a restaurant, and to linger and admire.

Norwegian Prima's Theater Will Turn Into a Nightclub at Sea

If the atrium aboard Norwegian Prima doesn't wow you, the ship's onboard theater will. It's always fascinating to see trends emerging in the cruise space, and the latest we've spotted is the multi-use theater.

Gone are the days of a formal, two-tier space with fixed seating and a traditional stage area. Instead, round theaters, bleacher-style seating and seating that retracts to allow the space to become a dance floor are all the rage.

Virgin Voyages spearheaded this concept in their Red Room on Scarlet Lady, where the audience faces each other on bleacher-style retractable seating, which can move to create a huge nightclub space; MSC is about to launch a similar concept on MSC World Europa in its Luna Park space, and now Norwegian Prima has it in the Prima Theater.

(That's not to say that NCL have taken the idea from either of those brands -- Frank Del Rio, famously, travels on no other brands -- but rather all those lines came to this design trend at the same time).

During the day the space will host classic game shows like the Price is Right and Supermarket Sweep, while at night this is the venue for the new show: "Donna Summer: The Musical", in which the theater will turn into a Studio 54 nightclub at the end.

On our short visit to Norwegian Prima, we ate in Hudson's, which is hands down the most exquisite "main dining room" we have ever seen. It may lack the wow factor of a vast double-height space of a classic Cunard dining room or the vastness of the main dining room on a Celebrity Solstice class vessel, but the design, the décor and the attention to detail is extraordinary. We genuinely thought it was a specialty restaurant based on the upscale quality of its decor.

We had a small taste of Hudson's, but when the ship goes into operation on August 25, passengers will be able to choose from a selection of dishes and cuisine drawn from across the ship.

NCL is upending the idea of a menu that changes daily, as is traditional on most cruise ships, but rather extending the choice to up to 20 items from a fixed menu that remains standard throughout the voyage.

Del Rio also revealed the line is pouring in a mind-boggling $100m specifically into food and beverage across the fleet this fall.

The Specialty Restaurants Could Easily Be on Ultra-Luxury Vessels

Norwegian Prima's upscale French restaurant, Le Bistro, would not be out of place on upscale sister line Regent in terms of décor alone.

"We wanted people to feel like they were walking into a Parisian apartment," as Walton put it, very accurately. "We wanted to bring Paris to the people."

In that respect, Cagney's neither looks nor feels like a traditional steakhouse, ratcheting up the décor and challenging what can be done with a traditional staple of cruising that's prevalent on nearly every ship afloat.

The Casino Leads Directly Off the Main Atrium

The only design aspect of this ship that was perplexing was the casino, only in as much as it leads directly off the main atrium. It seems a bizarre design choice; surely better to give its own space elsewhere on the ship, rather than a corridor that you have to walk to to get to other venues.

It's the exact same issue the line has on Breakaway class, where the casino takes up a huge chunk of Deck 6, with no real way round it.

There is also the smoke aspect -- if NCL allows smoking in the casino it will very likely permeate the atrium, which is a real shame.

The Waterslide Goes Through Cabin Balconies

Sometimes novelty doesn't work, and we feel this is a good example -- who in their right mind would want a balcony cabin with a slide going through the balcony? We kid you not. When we first read about this, we scratched our collective heads, but to actually see it up close only one word came to mind: "Why?".

The thought of listening to people screaming their way down this all day every day for the duration of your cruise, just outside your window actually gave us anxiety. We predict this will not appear on Prima Vessel Number 3.

Norwegian Prima Has Upped the Bar for Mainstream Vessels

Even during our short time aboard Norwegian Prima at the Fincantier yards near Venice, there is no doubt that Norwegian Cruise Line has raised the bar considerably with its new Norwegian Prima.

Norwegian's first new ship class in 10 years, Prima is both an evolution of all the most popular aspects of the line, but also a revolution in terms of style and design.

As Del Rio explained, this is the first NCL ship he and his team -- who have been in place since 2015 -- have had the opportunity to develop from scratch.

Norwegian Prima is, "A clean sheet of paper, no boundaries and we spared very few expenses to create this wonderful masterpiece," he said.

Cruise Critic will be sailing aboard Norwegian Prima's christening voyage in late-August. Stay tuned for more coverage of this exciting ship.