You may also like
Dismiss
Coronavirus: Updated Cruise Ship Policies and Cancellations Because of COVID-19 (2021)
Hurtigruten Ramps Up Return to Cruising With Most of the Fleet in Service by September
Swan Hellenic to be Relaunched As New Expedition Cruise Line
Did Ed Sheeran Name His Baby After Antarctica Cruise?
Rolling Out the Deals: Why Now Might Be a Great Time to Book a Cruise
Ships on the Move: Your Weekly Cruise Ship Round-Up
P&O Cruises Restarts Cruising For First Time in 15 Months on Britannia
Emerald Cruises Officially Launches in Australia
These Ships Are Coming Back To The U.S. in 2022: Here’s Why You Should Care 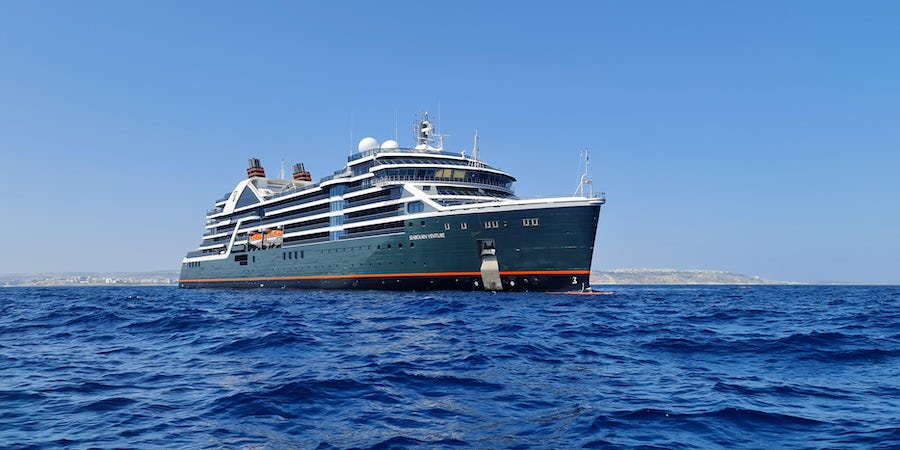 The 264-passenger ship is sailing its first voyage in the Arctic, a 12-night cruise that visits the Svalbard archipelago. Subsequent sailings in the next few months will call on Greenland, Iceland and the Canadian Arctic before the ship transitions to Antarctica to begin sailings there in November.

Until now, Seabourn has been known primarily as the luxury arm of Carnival Corporation, with small upscale ships that include butler service, caviar on demand and dining venues developed by Michelin-starred chef Thomas Keller.

In 2017, Seabourn branched out with Ventures by Seabourn, a shore excursion program that focused on more adventurous activities such as hiking, kayaking and Zodiac tours. That program proved to be the inspiration as the line developed its two expedition ships; the next one, twin ship Seabourn Pursuit, will launch next year.

"Exploration has always been part of our brand legacy, but the launch of Seabourn Venture turns the page on a new chapter for us, offering our guests opportunities to explore remote destinations in every corner of the globe and truly be a part of the natural wonders, wildlife, history\ and culture they’ll find there," Seabourn President Josh Leibowitz.

"Seabourn guests are as passionate about discovery as they are about traveling in ultra-luxury, and Seabourn Venture offers a new type of expedition experience allowing our guests to discover the magnificence from the Arctic to the Antarctic."

Seabourn Venture, along with Seabourn Pursuit, is built to high polar standards -- PC 6 -- which is what allows the ship to go into areas that traditionally have unpredictable ice.

The ship also carries a 26-person expedition team made up of wilderness experts, scientists, historians and lectures. The team not only takes care of the passengers during Zodiac trips and excursions, but also lead lectures on different topics related to the trip. They also dine with passengers during meals and interact with guests during the day onboard.

Luxury expedition ships now carry a complement of "toys," high-tech ways to see even more when you're in the wilderness. Seabourn Venture is no exception; the ship boasts two submarines that seat six people for underwater viewing. In addition, Seabourn Venture has enough Zodiacs to transport everyone onboard at once (although in some regions, such as the Arctic and Antarctica, the number of people on land at one time is restricted due to polar regulations).

The ship also has an Expedition Lounge and Discovery Center, where passengers will gather for lectures and programming, as well as the Bow Lounge, a venue that's close to the water line for marine life spotting. The Constellation Lounge on the top deck has 270-degree views.

Seabourn's reputation for luxury extends to Seabourn Venture, with the introduction of suites that span two decks, a first for the line. The ship also has multiple dining venues, including The Restaurant, the Colonnade, the Patio and line favorite Seabourn Square, as well as 24-hour room service.

Seabourn Venture is only the latest entry into luxury expedition cruising, a type of cruising that started its rise before the COVID-19 pandemic and has grown ever since.

Luxury competitor Silversea has long had an expedition fleet and is enhancing its offerings this fall with the purchase of Silver Endeavour. Viking has entered expedition cruising with a pair of ships, Viking Octantis and Viking Polaris, as has Scenic with Scenic Eclipse (and Scenic Eclipse II coming next year). Traditional expedition lines such as Quark, Ponant, Hurtigruten and Lindblad also have new ships, which are decidedly more upscale than previous vessels.

It all adds up to more choices, to go more places, than ever before.