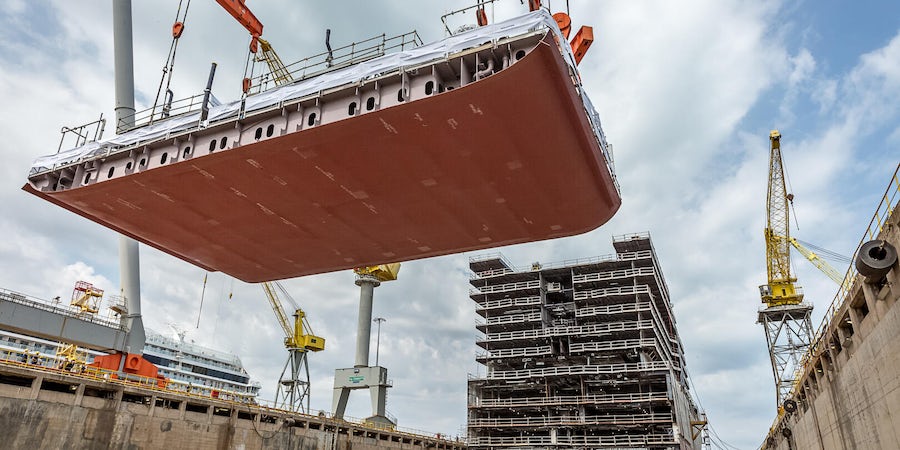 During the ceremony, a steel section of the 55,000-ton vessel was lifted onto the dry dock, signifying the official start of the ship's physical construction. The 720-passenger Seven Seas Grandeur is scheduled to launch in 2023 as the sixth ship in Regent Seven Seas' fleet.

"Seven Seas Grandeur builds upon Regent's rich three-decade-long history," Regent Seven Seas President and CEO Jason Montague said. "Inspired by our heritage, this will be a ship that harmonizes elegance, comfort, freedom and choice, providing an unrivaled experience, and will continue to delight our guests for years to come."

Ancona shipyard Director Gilberto Tobaldi added: "Seven Seas Grandeur marks our third collaboration with Regent Seven Seas Cruises. We are proud to partner with such a prestigious cruise line to develop Seven Seas Grandeur, which will be a beautiful model for the future of luxury cruising."

As part of the ceremony, Montague and Tobaldi placed three custom-minted coins onto the keel of the ship, each one representing one of the sister ships: Seven Seas Explorer, Seven Seas Splendor and Seven Seas Grandeur.  The coins will remain embedded within the ship's structure, a longstanding maritime tradition that is said to bring luck for all who sail aboard.

Introduced in 2016, Seven Seas Explorer, which the company billed as the world's most-luxurious cruise ship, was the first Regent ship built by Fincantieri; construction took place in the company's Sestri Ponente shipyard in Genova. Seven Seas Splendor was built in Ancona in 2020.