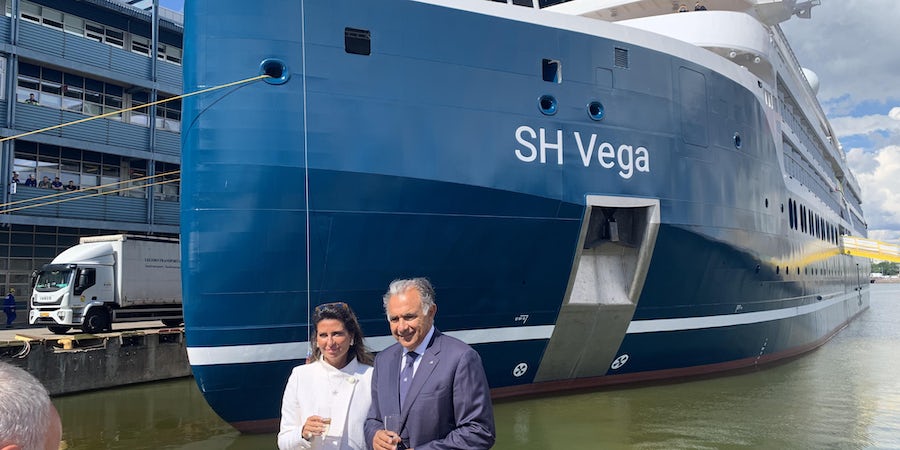 (6 a.m. EDT) -- Swan Hellenic's new cruise ship, SH Vega, has been delayed in Helsinki ahead of its first sailing. The cruise line says it doesn't expect subsequent sailings to be affected.

The 152-passenger expedition vessel was due to set sail at 3 p.m. Monday following its christening, but "technical and administration" problems -- due to where the ship is registered -- have led to the 27-hour delay. Its first cruise was supposed to be a a pre-inaugural voyage for media and trade partners/travel agents, to Copenhagen

SH Vega is now due into Copenhagen at 9 a.m. July 14. From there, it will sail to Tromso, Norway, where it is due to begin its Arctic season July 20.

There is no indication that future sailings will be affected at this stage.

"During last night, we managed to solve our technical and administration problems and the ship is ready to sail," Captain Tuomo Leskinen said in an announcement this morning. "However, we decide we postpone our departure until 6 p.m. this evening."

CEO Andreas Zito added: "We were ready at 4 a.m. to leave, but we prefer not to leave at that time as we were very aware that some people would have problems traveling back home arriving 4 or 5 a.m. in Copenhagen.

"With a concern for your travel schedule we prefer to postpone till tonight so to not disrupt your travel plans."

Registration Caused Problem Ahead of Delay

On July 11, the ship was christened at a ceremony at Helsinki Shipyard, where it was built, and was due to set sail soon after. However, in a series of announcements throughout the day, the departure time was continuously pushed back.

The ship has had a number of challenges to even get to this point, including divesting itself of Russian-backed investors and having to buy it from the shipyard by auction.

SH Vega was in sanctions until last week and only began the registration process at that time -- a process that usually takes four weeks. It was originally registered in Valetta, but "we didn't get very good co-operation from Malta," Zito said.

The line then approached The Bahamas and Panama simultaneously, but The Bahamas was closed due to a national day the ship is now registered in Panama.

Tugs and life rings have been replaced over the past 48 hours and even the hull has been repainted to reflect the new registry.

Sister ship SH Minerva operated a shortened season in Antarctica before it was cut short due to the war in Ukraine and the subsequent ban on Russian investors.

The ship is in Uruguay, where it has been for the past six months. It is not currently owned by Swan Hellenic, but by the Bank of Ireland, and Swan is putting pressure on the bank to sell. The line hopes to complete the sale and registration in August/September, and the ship is due to begin operation October 17, 2022.

Swan Hellenic is currently negotiating with banks and leasing companies to create a new company structure, which is confidential Zito said, but details of which will soon be released.

A third ship, SH Diana, is currently being built in the same shipyard and is due to launch in February 2023. It will be christened in mid-March 2023 in Piraeus, and will offer Eastern Mediterranean itineraries -- a nod to the origins of the original Swan Hellenic brand, which was born in the 1950s.

It will also call in at Sicily, Lisbon and Santiago de Compostela, Spain, before heading north to offer Arctic itineraries.

SH Minerva and SH Vega will be based in Antarctica for the 2022-2023 season, with Minerva offering a 30-day Antarctica circumnavigation to Dunedin, New Zealand, following in the footsteps of Robert Scott, 110 years after his ill-fated expedition.

Following the Antarctica season, the ships will offer different worldwide itineraries, with SH Vega following a route up the West African coast.

"We have been scouting intensively last year, there are areas nobody goes, there is a long stretch of 1,000 kilometers between Congo and Gabon which consists of three protected areas, including the South Loango National Park and the Conkouati Reserve," Zito said.

All three ships are part battery-powered, allowing for noise-free navigation and increasing the chances of seeing marine life.