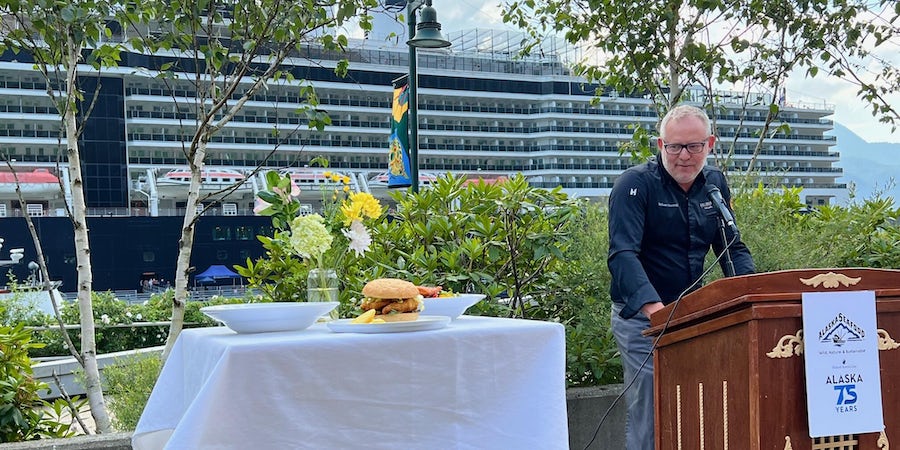 (12:42 p.m.) -- With the sun shining and local fishing ships unloading the day’s fresh catches on the waterfront in Juneau, Alaska, on July 6, Holland America Line announced a partnership with the Alaska Seafood Marketing Institute (ASMI) to serve sustainably sourced Alaska seafood on all six of the cruise line’s ships sailing in Alaska.

The announcement was coupled with the debut of three new dishes by Holland America Culinary Council Member Chef Ethan Stowell, developed in consultation with ASMI and soon to be rolled out across HAL's Alaska fleet.

"On Holland America Line ships, we purchase and serve a tremendous amount of seafood," said Dan Rough, Holland America Line vice president of revenue management."There are over 4,000 pounds of fresh Alaska fish on every cruise. That’s all six ships, each sailing, every week."

"And for guests who enjoy one of these wonderful dishes, they will know full well that it is coming from the waters right here, being fished sustainably by the fishermen and women of Alaska."

These new dishes will be added to the Alaska seafood selections already on the menus offered on the six Holland America ships sailing in Alaska this season.

"I can personally attest that Holland America cares about the product it is giving its customers. It is also kind of rare," Stowell said. "There’s this global sense of awe about the seafood that comes from Alaska, and it is great to be part of it. Having something that’s wild from these waters that is sustainable is a special thing. And the fact that we can have it on a daily basis, and we can offer it on abundance on ships this big is pretty cool."

Holland America says this is the first formal relationship of its kind between a major cruise line and ASMI, a public-private partnership created to foster the economic development of Alaska seafood as a renewable natural resource.

"As we continue to increase the awareness of wild and sustainable Alaska seafood, we are excited to work with an Alaska-focused brand like Holland America Line and will be working closely to grow the collaboration," said Jeremy Woodrow, ASMI Executive Director. "The first activation with Chef Stowell beautifully incorporates wild Alaska seafood into the menu and will give guests a taste of the unrivaled bounty that only Alaska can offer."

Holland America Line has been sailing to Alaska for 75 years, with 2022 ships homeporting in Seattle, Seward and Vancouver, Canada. This season is the first to have a full fleet deployment, after a truncated 2021 cruise season in the region.