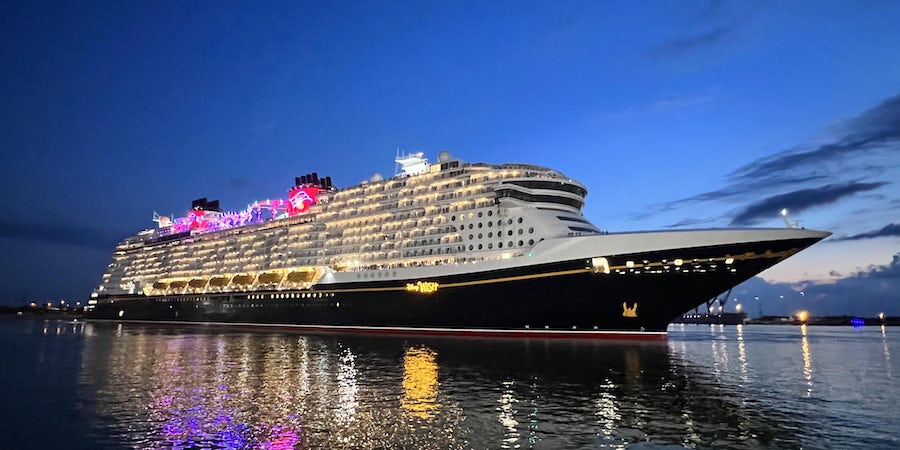 (1:10 p.m. EDT) -- Ahead of its long-awaited inaugural season, Disney Cruise Line’s newest ship, Disney Wish, arrived on Monday to its new homeport of Port Canaveral after completing a transatlantic crossing from Europe without passengers.

The 144,000-gross-ton Disney Wish arrived just before dawn, escorted by a fleet of tugboats and the Port Canaveral Fire Rescue Fireboat 2, which provided the customary water cannon salute for the new vessel.

With capacity for 4,000 passengers in 1,254 staterooms, Disney Wish becomes the fifth member of Disney Cruise Line’s fleet and the first vessel in the line’s Triton-class. The ship is also the first in the fleet to be powered by liquefied natural gas (LNG). Disney Wish becomes the second cruise ship homeported in North America to be powered by cleaner-burning LNG, along with Carnival Cruise Line's Mardi Gras.

"We have anticipated this homecoming of the Disney Wish for some time and know that our entire Port community is excited to have her sailing from our Port," said Port CEO Capt. John Murray. "We are proud of the longstanding partnership we have with Disney Cruise Line, and the arrival of the Disney Wish adds to the growing number of impressive cruise ships providing high quality guest experiences from our Port."

Disney Cruise Line passengers also celebrated the long-awaited arrival of Disney Wish and took expressed their excitement on Cruise Critic’s community forums, sharing photos of the vessel in her new port. “Beautiful,” writes jalves. “I can hardly wait for the Maiden voyage.”

Disney Wish’s maiden voyage is scheduled for July 14, 2022 from Port Canaveral’s Cruise Terminal 8. On its inaugural season, the ship will embark on three-and four-night itineraries to The Bahamas, including stops at Castaway Cay, Disney’s private island.

Cruise Critic will be sailing onboard a special preview cruise scheduled to depart June 29, following the ship's official christening.