You may also like
Dismiss
Coronavirus: Updated Cruise Ship Policies and Cancellations Because of COVID-19 (2021)
Norwegian, Royal Caribbean Team Up To Create Cruise Health and Safety Protocols
In Industry Step Forward, CDC Seeks Public Comment On Cruise Resumption
What Happens to Cruise Ships During the Pandemic's Hurricane Season?
Ships Ahoy! A Weekly Round-Up Of Worldwide Cruise Ship News
Out to Sea: Keeping Tabs on the Global Cruise Fleet
Live From Celebrity Edge: A Cruise That Seems Normal Again; "I'm So Hopeful"
A 'Thor: Love and Thunder' Cameo That Gets Cruise Fans Excited
Just Back From Allure of The Seas' Maiden Galveston Sailing: Hits and Misses 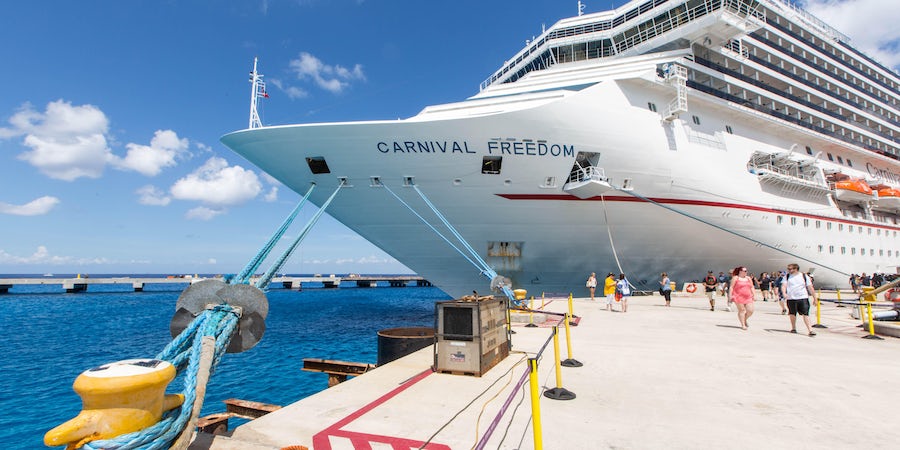 (12:48 p.m. EDT) – Sporting a forced makeover, Carnival Freedom is back on the seas after a funnel fire forced the cancellation of three voyages and a subsequent stint in drydock little over two weeks ago.

Carnival Freedom returned to revenue operations on Saturday from Port Canaveral, where it embarked on a 5-day cruise to Nassau, Princess Cays and Grand Turk.

The ship spent the last two weeks undergoing technical repairs in Freeport’s Grand Bahama Shipyard. The ship's signature ‘whale tail’ funnel has been trimmed down to just a single stack in Carnival's branded colors, but will be added back when Carnival Freedom undergoes its next scheduled drydock.

“Just drove past Port Canaveral and saw a really strange sight," writes jordainare. "The Carnival Freedom is back in port. At least most of it. The whale tail is missing! I guess they didn't have a spare one lying around,” wrote jordainare.

“She looks rather odd but glad to see her back,” writes Pyrate13.

The fire, which was limited to the ship’s funnel, broke out on May 27. The cause of the fire has not yet been determined. No passengers or crew were injured during the blaze, which broke out when the ship was alongside in Grand Turk.