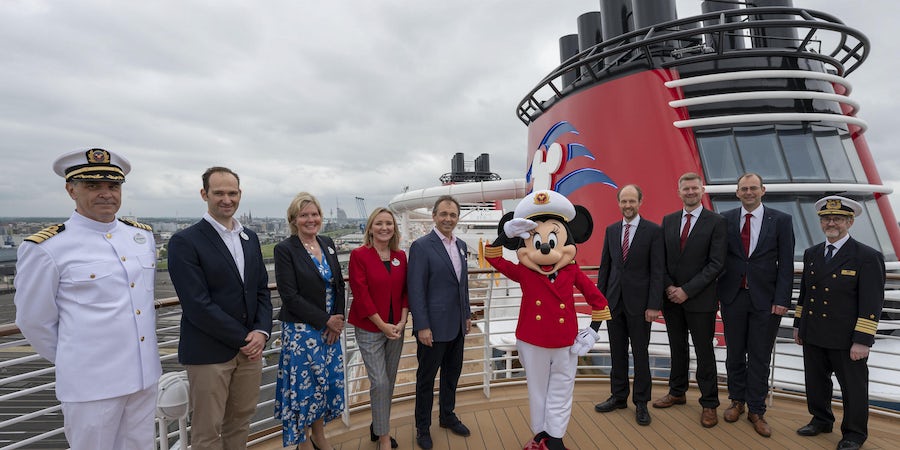 (11:25 a.m. EDT) -- Disney Cruise Line's first new cruise ship constructed in a decade was officially handed over to the line from the shipyard Thursday.

The 4,000-passenger Disney Wish was welcomed into the Disney Cruise Line fleet with a handover ceremony held in Bremerhaven, Germany. The ship, which is powered by Liquefied Natural Gas (LNG), was constructed at Germany's Meyer Werft shipyard and was most recently in Eemshaven, Netherlands for crewing and final outfitting.

The Meyer Werft flag was lowered from the vessel, and Disney Cruise Line's house flag was raised, signifying transfer of ownership of Disney Wish over to the cruise line.

Disney Cruise Line presented Meyer Werft with a Cinderella statuette in honor of the life-sized bronze statue that will welcome passengers into central atrium -- dubbed the Grand Hall -- aboard Disney Wish.

Disney Wish makes its official maiden voyage from Port Canaveral on July 14. Cruise Critic will be sailing on a special media preview cruise on June 29 and will have all the details of this exciting new ship here.

Cruise Critic recently sailed aboard the 1999-built Disney Wonder on one of its special Western Caribbean cruises from New Orleans, and found the pandemic has dampened none of the line's special brand of family-friendly fun.