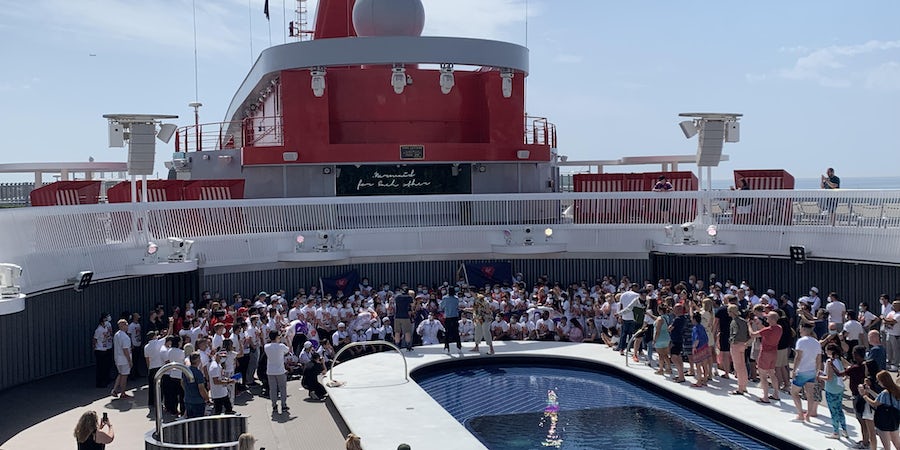 Valiant Lady will be based in Barcelona for the summer season, before transiting to its homeport of Miami for the winter.

Branson, 71, kicked off the sailing with a mass selfie on the pool deck with crew -- before jumping into the pool (fully clothed) with Chief Experience Officer, Nirmal Saverimuttu.

"I just wanted to say thank you to all of you, you are magical, magical people and it's just great to have you onboard," Branson said, addressing the assembled crew, who hail from 80 different countries.

"Great to see all your smiling faces, great to see how you all interact with each other and thank you and I look forward to seeing you all on the ship tonight -- and now I'd better go and get changed!"

Speaking to journalists later that day, Branson added: "The nice thing is the feedback from people who've been on the ship is fantastic, the repeat bookings are fantastic and there are even one or two people who are living on our ship right now."

Virgin Voyages president and CEO Tom McAlpin said repeat bookings stood at around 30%, and that the line was attracting new to cruise.

The ship has 1,330 cabins and 78 RockStar Quarters including two iconic Massive Suites, one of which Branson is in.

Branson described Virgin Voyages -- which has two more ships on the way -- Resilient Lady and Brilliant Lady -- as "a small niche player in a big market".

The sister to Scarlet Lady, Valiant Lady launched in Tilbury, London, in April and operated a short series of cruises to Northern Europe from Portsmouth before heading arriving in Barcelona Saturday.

The ship is sailing at a little less than half full, with passengers hailing primarily from the U.S., the U.K. and Australia.

Valiant Lady is largely a carbon copy of Scarlet Lady, with a few tweaks, including, refreshing the cabins on both ships to make them feel less "IKEA"-like in terms of design; and also adding more sitting and seating areas onboard.