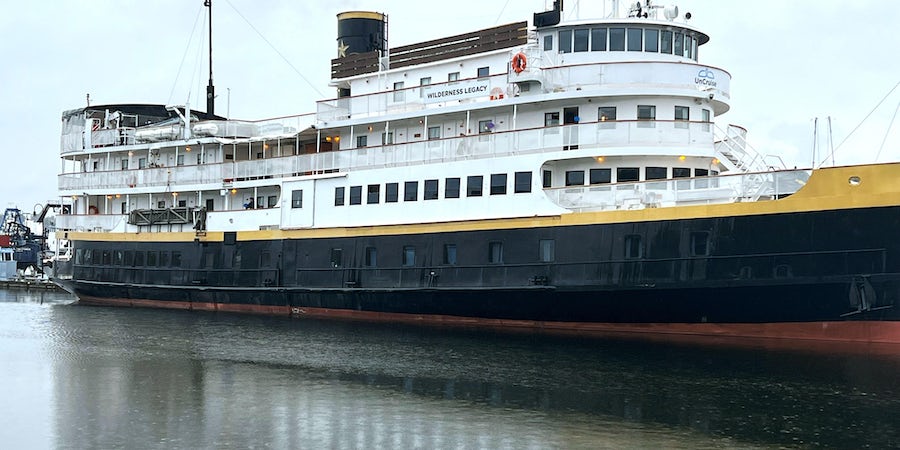 UnCruise CEO Says Small-Ship Cruises Are a Go. And a Great Way to Go.

But before the Wilderness Legacy headed north, the American-owned small-ship adventure cruise company hosted a one-day behind-the-scenes "tester" sail on the ship out of Seattle's historic Fishermen's Terminal, where UnCruise has its headquarters. Aside from managers, many of the ship's crew are new hires, so the short sail was a training, tester and bonding day for the team, too.

Cruise Critic went along to get a refresher on the UnCruise experience, which, company CEO and Founder Dan Blanchard said "is more aligned with the adventure end of the travel industry than with the cruise end. We offer few scheduled port calls and instead focus more on wildlife sightings and adventure activities such as hiking, kayaking, snorkeling and skiff excursions."

The day started with a safety talk and a ship tour, which included stops in the lounge, dining room, galley and the cabins. (Staff told us "those in the know" try to book some hidden gems first: In the Trailblazer category, cabins 303 and 304 are a bit larger than the others, and 311 is the only one with a fixed queen bed; in the Commodore category, cabin 301 has a curved bank of viewing windows.)

After traveling through Seattle's Ballard Locks (a rare treat on a cruise ship) and a lunch that included samples of what both the ship's new bartender and pastry chef can whip up (red or white sangria and a layered raspberry cake were hits), it was off to afternoon activities such as kayaking, skiff tours and shore hikes that embarked from the Sea Dragon, a portable launch platform that travels with the ship.

Alaska is Ready for the Small-Ship Return

With so many bucket lists newly revised and most travel restrictions lifted, many travelers are returning to cruising by choosing small ships, which offer more personalized adventures and, in what we hope is a post-pandemic season, the safety of small groups.

For UnCruise and other U.S.-flagged and crewed small-ship companies, that means the summer season in Alaska is looking very promising.

"It looks we'll have most of the small ships back," Blanchard said. "We will have seven of our eight ships out there. A company called the Boat Company is back. Lindblad is back with the addition of a vessel. American Cruise Lines is back. And Alaska Dream Cruises is back with four or their five larger ships. So yeah, we're hoping for a good season."

Many passengers might be choosing small ships this summer with an eye to COVID safety and because so many activities are active and outside. And while masking and testing requirements have been dropping, for this season, at least, UnCruise is still requiring all crew and passengers to be vaccinated and boosted.

"We had one or two people saying they don't want to get the booster, but then they've end up getting it because they want to travel," Blanchard said. However, he knows that some of UnCruise's previous clients will not return until the vaccination requirement is dropped. "And that probably won't happen until after this season is over because we have crew and passengers that joined the trip based on it everyone being vaccinated."

While concerns about COVID might be waning, UnCruise Adventures and others are still grappling with the challenging employment market and finding enough crew members.

Foreign-flagged cruise lines can recruit from all around the world, but U.S.-based operators may only hire American citizens. There are some advantages to that, Blanchard said, "but right now the big challenge is just finding workers."

Blanchard said in the past his company would overhire to compensate for young, seasonal crew members who might decide that being on a boat for six weeks is not for them. "But because of the labor shortage, we can't do that anymore."

So far, staffing challenges have not caused UnCruise Adventures to cancel any sailings and "there seems to be a lift in the outdoor and adventure travel sector," Blanchard said. "So, I'm hopeful we're in a good position."

In addition to Wilderness Legacy, UnCruise Adventures has eight other ships that carry from 22 to 76 passengers and travel to Alaska, Hawaii, Costa Rica, the Galapagos and other destinations. Cruises have few scheduled port calls but lots of wildlife sightings and an emphasis on adventure activities such as hiking, kayaking, snorkeling, and skiff excursions.

The 2022 season includes a new "Wild, Wooly and WOW" Alaska sailing, a partnership with REI, and a first-ever Ironman sailing.