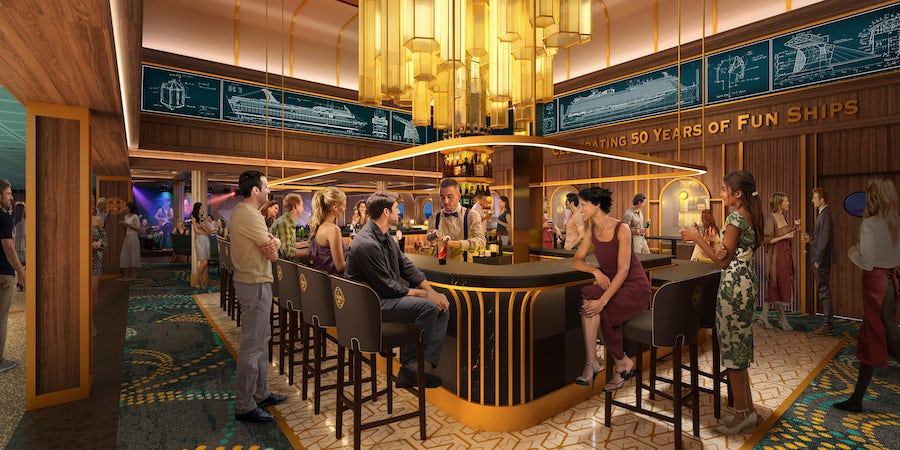 (3 p.m. EDT) -- Carnival Cruise Line announced Wednesday it will introduce a new bar and lounge paying homage to Carnival's 50 years of maritime history aboard Carnival Celebration when it debuts later this year.

Carnival Celebration -- a sister-ship to 2021's Mardi Gras -- will honor Carnival's past vessels in The Golden Jubilee, a new space that will combine both historic pieces culled from classic Carnival vessels dating back over the last five decades, to motifs and even brand-new furniture designed with recreating some of the line's past décor and bringing it to modern audiences.

The new Golden Jubilee will take the space occupied by the Brass Magnolia onboard Mardi Gras.

The classic pieces from Carnival's past vessels were taken from the personal collection of author and maritime historian Peter Knego, who has been, for decades, rescuing fixtures, artwork and important memorabilia from ships before they are broken up at the end of their service careers.

"It's a dream that took 20 years to happen, and I'm just so grateful to the team at Carnival for putting it all together," said Knego during a press conference at Seatrade Cruise Global in Miami.

Included in The Golden Jubilee will be hand-drawn designs by longtime Carnival architect Joe Farcus, and reproductions of blueprints of Carnival's earliest ships that will surround a central bar with two-deck high ceilings.

The lounge will also offer recreated chairs from the TSS Carnivale's Riverboat Lounge, paired with cocktail tables from Carnival Fascination's Hollywood Boulevard. Carnival Fascination, one of Carnival's original Fantasy Class vessels, was scrapped as a result of the ongoing global pandemic.

Culled from Knego's personal collection are original etched-glass panels and windowpanes from the casino found aboard the TSS Mardi Gras of 1972, which began life as Canadian Pacific's Empress of Canada. The ship remained in the Carnival fleet until 1993, and was scrapped in 2003.

Etchings from the original Carnivale, which sailed from 1975 to 1993, will adorn the lounge's entrances aboard Carnival Celebration, allowing these classic pieces of mid-century modern art to live on once more. The Carnivale was originally built by Canadian Pacific as Empress of Britain.

A highlight of the bar includes an original bronze statue of Carnival founder Ted Arison and Finnish shipbuilder Martin Saarikangas, presented as a gift from the Kvaerner Masa-Yard in Finland to Carnival upon the delivery of Carnival Sensation in 1993.

Carnival has also recreated numerous classic motifs for use aboard the all-new Carnival Celebration, including floor tiles surrounding the bar that features a stylized Maple Leaf pattern that recalls the maple leaf motif used in the Grand Ballroom aboard the TSS Mardi Gras and recalls the ship's former life as a Canadian Pacific ship.

The announcement of the new Golden Jubilee lounge comes as Carnival celebrates its 50th anniversary this year, coming at a poignant time in the company's history as the line seeks to restart its entire fleet. The majority of the line's fleet is now operational once again, and Carnival Splendor -- which had previously been based in Australia -- restarts its first revenue voyage as it sails from Seattle to Alaska for the first time in its history.

"Coming out of this terrible pandemic we've had the opportunity to celebrate with the restart (of cruising), and now culminating at the end of this year with Carnival Celebration is really special for all of us," said Carnival president Christine Duffy.

"It's all about moving forward. More to come!"