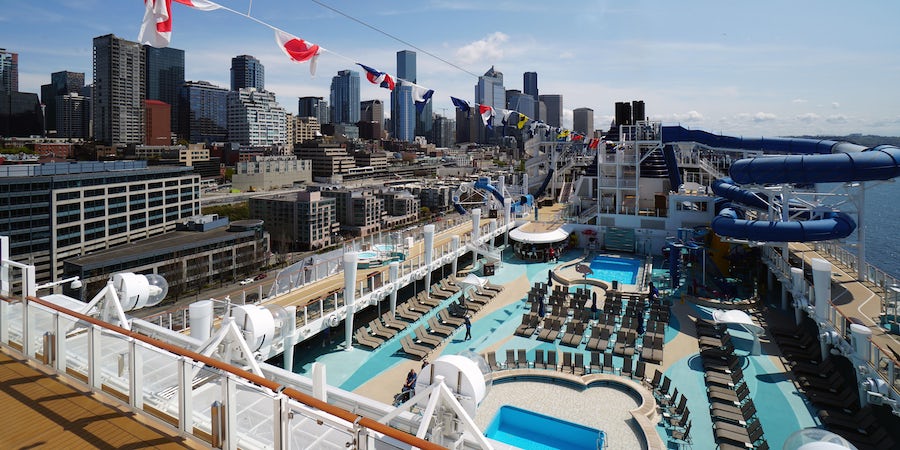 (9 a.m. EDT) -- After two long years, the Alaska cruise season is back in force. On Saturday, NCL's Norwegian Bliss set sail from Seattle's Pier 66 as Mount Rainier towered into blazing blue skies behind the city's iconic skyline. Norwegian's sailing marks the first major cruise line to return to Alaska in 2022, after a truncated 2021 season.

Norwegian Bliss also kicks off one of the longest Alaska cruise seasons in history, which extends until October 23, when Norwegian Encore closes out the season.

Saturday's warm temperatures set the mood aboard Norwegian Bliss as the ship sailed into the waters of the Puget Sound. It also matched the palpable sense of relief on dry land as the Alaska cruise season moved into full swing in Seattle for the first time since 2019.

Clad in a Seattle Mariners jersey, Seattle Mayor Bruce Harrell bellowed "We're back. The cruise season is back!" That unbridled enthusiasm was everywhere at the port, from passengers cheering as they were allowed to board Norwegian Bliss, to crew members and local business owners at a news conference before sailing.

"This day feels like the first day of spring break after two years of finals," said Councilmember and owner of Fremont Brewing Sara Nelson.

Colleen Wilkie, owner of Shug's Soda Fountain in Pike's Place Market, echoed Nelson. "Having the cruise ship industry back in port has put Shug's back in business," she told those gathered.

COVID-19 rules and precautions across the U.S. were relaxed at almost the exact time that the 2022 Alaska cruise season reopened.

However, NCL is still implementing strict vaccine and testing protocols, though masking is voluntary for passengers, and occupancy rules have been dropped. NCL's safety protocols will remain in place for the foreseeable future, but Norwegian Cruise Line President Harry Sommer says the return to a full Alaska cruise season will look and feel similar to pre-pandemic Alaska cruises.

"The most important thing to remember is not the few changes we made, but the 99% that stayed the same," Sommer said. "People come on cruises because they have an extraordinary vacation visiting beautiful places up and down this beautiful coastline, and they'll continue to do so in 2022."

Even so, NCL has continued to develop new experiences in Southeast Alaska with local partners. Those are most notably at Ward Cove, outside of Ketchikan, and Icy Strait Point, to the southeast of Juneau. Work at Ward Cove is ongoing, though Norwegian is betting on surging interest in natural experiences from the port's nearly direct access to Tongass National Forest. At Icy Strait Point, the completion of the Mountain Top Gondola now offers direct, bus-free access to the top of Hoonah Mountain for views as far as the Juneau Icefield on clear days.

Sustainability and Resilience Is Front and Center for Norwegian and Communities

While the bells and whistles of a ship like Norwegian Bliss are a major draw of an Alaska cruise, the destination itself is the star of the show. And that destination is very much at the center of discussions about sustainability and climate change.

Sommer, along with Ward Cove Dock Group President John Binkley, SVP of Icy Strait Point Tyler Hickman, and John Boesche, SVP of Tourism at Visit Seattle, made it clear that environmental sustainability would remain front and center as the Alaska cruise season swings into even fuller gear by 2023.

Speaking about NCL's partnerships with communities, Sommer said that their work with Ward Cove and Icy Strait Point demonstrated their commitment to "authentic experiences and partnering with local communities in environmentally sustainable ways." In Ward Cove specifically, the community cleaned up an EPA superfund site in partnership with NCL.

Sommer also reiterated NCL's pledge to hit zero greenhouse gas emissions by 2050 along with annual reporting to make the process as transparent as possible.

However, changes in weather patterns and higher average temperatures are playing a role in the lengthening Alaska season. Hickman asserted that April is more reliably mild than in years past, suggesting that cruisers "go earlier" rather than later in the season.

While Sommer and others didn't openly indicate that NCL is planning to expand its range in Alaska to correspond with longer sailings seasons, newer port destinations like Ward Cove and Icy Strait Point do build sustainability and climate resiliency into the plan.

"We analyzed hypothetical climate scenarios on sea level rise, and many of the ports are most vulnerable to the impacts of climate change," Emily Bishop, of NCL's Environmental, Social & Governance, told Cruise Critic. "We want to make sure that we're building resiliency together."

The experience on land is echoing that commitment more and more -- and is keeping Alaska the wild destination that has made it a bucket-list trip for so many travelers and cruisers over the years. According to Hickman, the vehicle-free waterfront at Icy Strait Point is more than just a visible demonstration of environmental stewardship. According to him, the gondola system has replaced the equivalent of 150 buses required to move the same number of people.

"This is about getting people back out into the wilderness," he said. "It's really about sustainability and preserving the natural side of our port."