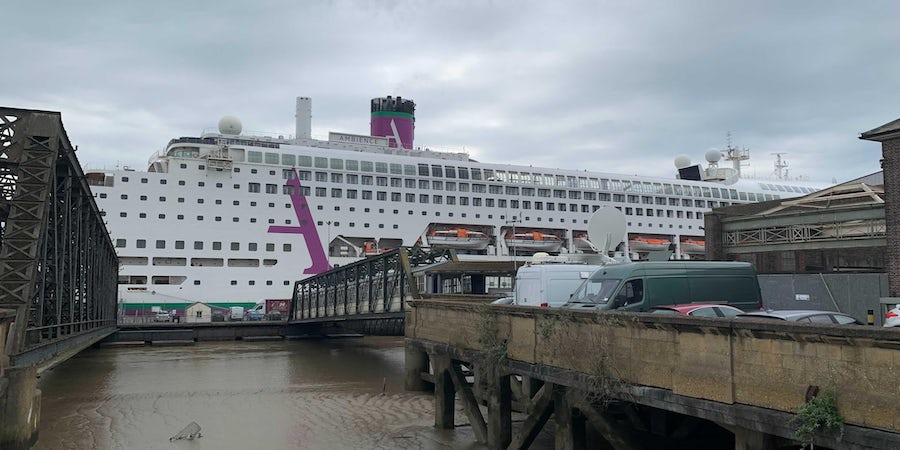 The 1,400-passenger ship, which started life as Regal Princess in 1991, was renamed Ambience in a ceremony at Tilbury Docks.

Ambience will set sail with its first fare-paying passengers on its inaugural cruise to Hamburg and Iceland tomorrow.

Multi-medal winning Gunnell pressed the red button to launch the Champagne bottle which smashed against the hull.

Gunnell - who was born a short way from Tilbury - said it had always been her dream to be a godmother.

CEO Christian Verhoung said: “It’s difficult to put into words how exciting and relieved I am.”

“I also want to apologise for the delay- we came here 14 days late.

“Not receiving fuel from Croatia was out of our hands.”

The line was forced to cancel two sailings due to supply issues, mainly fuel-related.

As a way of thanking those who opted to rebook rather than cancel -- about 80% -- a number of passengers were invited to attend today’s event.

First British Cruise Line to Launch In More Than a Decade

Ambassador is the first British cruise line to launch in more than a decade.

The line fills a gap left by Cruise & Maritime Voyages, appealing to over-50s Brits looking for a no-fly value cruise.

And in fact much of the management team comes from the now-defunct line.

Ambience was due to join CMV as Amy Johnson, but the line went bust before it even went into service.

The line will operate 31 cruises and travel 90,000 miles and visit 36 countries this season.

Ambition will also offer no-fly cruises from Tilbury, as well as Belfast, Liverpool, Newcastle and Falmouth.