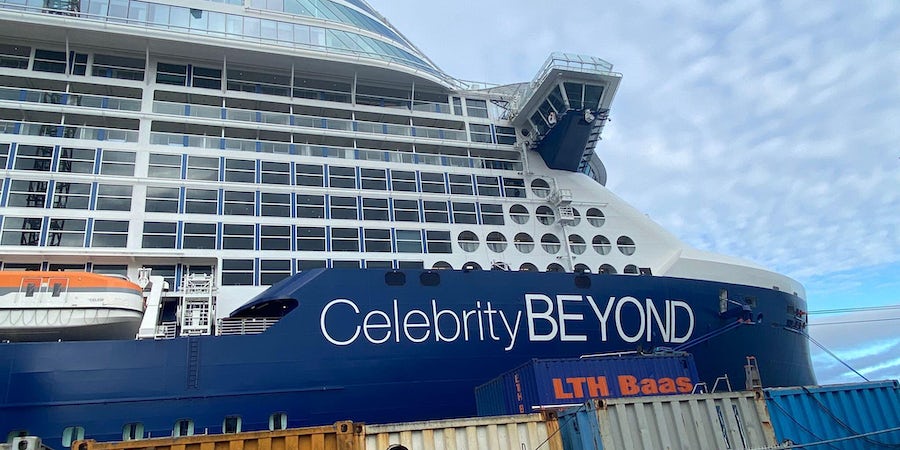 Celebrity Beyond ship's handover marks the shipyard’s first physical delivery event since before the pandemic.

An official ceremony took place in the ship's glitzy three-deck Grand Plaza, attended by crew, officers, members of the media and a number of cruise line executives.

Speaking at the event, President and CEO of Celebrity Cruises, Lisa Lutoff-Perlo said: "I need to extend my heartfelt gratitude to the amazing job that the shipyard, contractors and subcontractors did building the most spectacular ship in the world during the most difficult of times."

Also in attendance was CEO of the Royal Caribbean Group, Jason Liberty, adding: "I really want to thank Lisa and her team for their incredible vision of Celebrity Cruises, of the Edge class, of Beyond. It's really inspiring to see how a product just continues to evolve and really hitting every single mark to create incredible experiences.

"It takes a real village to build a magnificent vessel like this and so I want to thank Harri Kulovaara, Executive Vice President, Maritime & Newbuilding of Royal Caribbean Group, and the new-building team. I want to thank all of the thousands of people it has taken to build this incredible vessel.”

Helmed by captain Kate McCue -- who was handed the keys to the ship by Jason Liberty during the celebrations -- the line's third Edge-class ship will sail to Southampton later this month in preparation for its maiden voyage on April 27.

The 3,260-passenger Celebrity Beyond cruise ship is 20 meters longer and with one extra deck than its Edge-class siblings, Celebrity Edge and Celebrity Apex, with an extra 159 cabins and 20 suites.

A range of industry big hitters were enlisted to work on the ship’s interior, which features new AquaClass SkySuites; a two-deck sundeck at The Retreat; two-story villas with plunge pools and an expanded Rooftop Garden and resort deck featuring cantilevered float pools.

The Sunset Bar at the ship's aft is also multi-decked (and multi-terraced) and New York-based Michelin-starred chef Daniel Boulud has a restaurant onboard (his first at sea), called Le Voyage. Other spaces include the redesigned three-deck Grand Plaza and popular Martini Bar, overlooked by the new World Class Bar and Le Voyage.

Celebrity Beyond will spend its maiden season sailing the Mediterranean from Rome and Barcelona before repositioning to Florida where the ship will be christened later in the year.