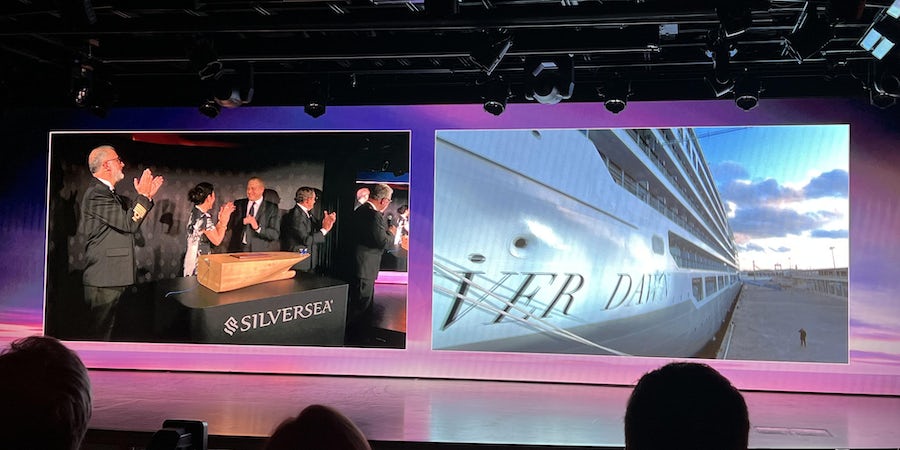 (2 p.m. EDT) -- With the smash of a Champagne bottle, Silversea Cruises christened its latest luxury ship, Silver Dawn in Lisbon.

Silversea Cruises CEO Roberto Martinoli told journalists earlier this week that Royal Caribbean intends for Silversea to be "the biggest" in the luxury market. With its new ships, Silversea is increasing capacity by 61% and its global market share in the luxury segment will move from 20% to 31% by 2024.

What made Royal Caribbean happy during the ongoing COVID-19 pandemic is that Silversea guests like to plan ahead -- way ahead, Martinoli said. So Silversea was still bringing in deposits when sister companies Royal Caribbean and Celebrity were not.

"Our clients understand and appreciate the fact that Royal coming in has been an advantage and not a disadvantage," Martinoli told Cruise Critic in an exclusive interview. "I know we are financially a lot stronger than we were before…. It's a capital-intensive business. You do it a lot better if you're part of a very large corporation, as we are today."

Silver Dawn is a Sister Ship -- With Some Significant Changes

Silver Dawn is a sister ship to Silver Moon, which debuted in 2021 and Silver Muse, which launched in 2017. The 596-passenger ship does have some unique qualities that its siblings do not.

The first is a complete overhaul of the ship's spa concept. Otium (pronounced aught-ee-um) is meant to channel the Roman baths and wellness principles, where indulgence rather than deprivation is the order of the day.

To that end, guests are encouraged to drink champagne and cocktails and nibble on gourmet snacks as they go between steam and sauna rooms within the spa. While new elaborate treatments are on the spa menu, you don't have to buy one to take part; the thermal area with its sauna and steam room is open to all passengers during certain hours.

The Otium concept also goes beyond the spa and into the suite itself. There is an enhanced pillow menu; an enhanced bath ritual and concept, as well as a balcony relaxation offering and comfort food room service menu (we can report that the truffle popcorn is outstanding).

A smaller change is that the onboard boutique has now added vintage (pre-owned) designer handbags from Chanel, Hermes and Louis Vuitton, as well as Hermes shoes. While not everyone has $19,500 sitting around for a Birkin, the shop manager said the shoes had already been doing brisk business on Silver Moon.

Now that the three siblings are out in the world, Silversea is turning its attention to a new class of ship, the Nova class, which debuts in 2023 with Silver Nova.

The 728-passenger ship will not only be larger, it will mark a large leap in sustainability, Martinoli said, as it will run on hybrid power. The hope is that the ship will be able to move completely to fuel cell power while it's in port.

Both Martinoli and Liberty mentioned sustainability and improving the environmental footprint as a necessity for cruising going forward. If you do not become environmentally friendly, “you will not be able to borrow money,” Martinoli said. "It is a necessity to survive.”

Expect Entertainment Changes to Come Next

Now that the line has revamped its culinary and spa programs, entertainment is the "third pillar" that will be examined next, Martinoli said.

"The challenge is that, of course you cannot expect to have the Broadway type of shows here. We have small ship and a small theater," he said. "So we need to find smart ways to entertain people, maybe along the same lines of the destination."

Enrichment is another area that the line is examining. "We want to make sure that our enrichment programs are as strong as they can be because this doesn't require you to have big spaces and big hardware," Martinoli said. "It is very much in line with our brand and what our people want."

For inspiration, Martinoli said executives have been spending time with sister brands such as Celebrity; Royal Caribbean also has a large training studio in south Florida. "Entertainment might be an area where we can profit off of their giant organization and the resources they have to help us."

Silver Dawn Will Spend Summer 2022 in the Med Before Heading to the U.S.

With the christening complete, Silver Dawn takes its first paying passengers April 1 on a seven-night cruise that starts in Lisbon and ends in Rome. The ship will sail a variety of itineraries in the Mediterranean with departures from Barcelona, Venice and Rome.

Once the summer is over, the ship will reposition to the Caribbean for winer 2022 and spring 2023, with itineraries that leave from Fort Lauderdale, Puerto Rico and Barbados.