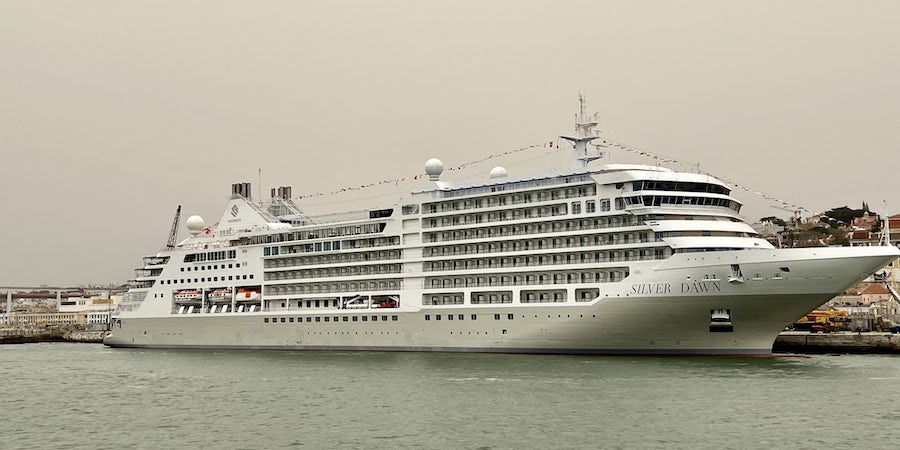 (10:22 a.m. EDT) -- Gentlemen hosts, single men who are hired onboard cruise ships to host social events and dance with single women, have been a casualty of the COVID-19 pandemic. But this glue in the onboard fabric of lengthy cruises will be coming back, Silversea Cruises CEO Roberto Martinoli confirmed.

"Particularly for world cruises," Martinoli said at a media breakfast on Silver Dawn, the newest ship in the Silversea fleet. "It's essential on those trips," he added.

What exactly is a gentlemen host? Also known as cruise dance hosts, these ship employees have a variety of social functions that they play on a ship. Besides making sure that single women aren't sitting on the sidelines, they also host tables in the dining room, go on shore excursions and show up for social events.

Despite the name, gentlemen dance hosts have not always been male. Crystal brought on a female dance ambassador during its Ballroom at Sea cruises to dance with single men. Demographics and female longevity being as it is, long cruises generally have more single women on them than men.

The requirements for cruise dance hosts can vary by line, but generally the gentlemen hosts are part of the silver-haired set, with a compliment of dance moves -- fox-trot, waltz, swing, rumba, and cha cha -- in their repertoire (they also need to be able to dance to pop music in the nightclub). They receive employment in exchange for cruise passage; even though they often share a cabin and are strictly forbidden from romantic liaisons onboard, the job was highly coveted in pre-COVID times.

Martinoli did not give a timeline for when the hosts would return -- they are not on the line's current World Cruise -- so single men ready to mingle should save their resumes for now.

Interested? Read more about the job in our article What is a Cruise Dance Host?

While on Silver Dawn, set to be christened on Thursday March 31 in Lisbon, Martinoli and Silversea Chief Commercial Officer Barbara Muckermann updated media and agents on the just-completed Antarctica expedition season.

Of particular interest: the Antarctica Bridge fly-cruise trips -- which allow travelers to skip the often treacherous and lengthy Drake Passage by flying directly to the White Continent and boarding a ship -- have attracted a new type of passenger for the luxury cruise line.

Muckermann said that the offering, which debuted this season in late 2021, has drawn Silicon Valley tech millionaires, as well as other younger people who are still working and have yet to retire.

"The high-energy, seven-day bucket list trips, they tend to attract non cruisers," she said, adding that the Galapagos trips on Silversea's recently christened expedition ship Silver Origin are also selling well. "It’s like a safari at sea and it attracts those crowds."

While avoiding the seasickness that can accompany a Drake Passage sailing is tempting, the Antarctica Bridge trips do require more mobility than the line's traditional offering, Muckermann noted.

Passengers must don all of their cold weather gear while on the charter flight from Punta Arenas, she said. The plane lands on a gravel road at a military base in Antarctica and requires walking in the cold for about a mile before reaching the Zodiacs that will bring you to your Silversea cruise ship.

Still, being able to cross off that bucket list trip with so little downtime -- the typical Antarctica cruise has at least four days at sea going back and forth over the Drake -- is an appealing option, especially for those who can't leave work or reliable WiFi for extended periods of time.

Read more about options to fly to Antarctica for a cruise.

What Saudi Arabian Nationals Want When They Cruise

No nationality cruises alike -- and during 2020, Silversea Cruises had the opportunity to explore what Saudi Arabian nationals like to do at sea when the line chartered Silver Spirit to the Kingdom for the month of July.

It's no secret that Saudi Arabia has been investing in bringing the cruise industry to its country. As Cruise Critic editor Adam Coulter found when he sailed in Saudi Arabia on Scenic Eclipse last year, the Kingdom is planning to build five ports along the Red Sea coast and also redevelop Jeddah's port to integrate it into the city.

Martinoli sees the country as an opportunity down the road for international passengers, particularly the European market. The line also learned quite a bit about what the Saudi Arabian domestic market wants in a luxury cruise during the charter.

First, the ship had to adjust to different hours, Martinoli said. Because of the country's heat, people are used to more activities in the evening and late into the night; it was not unusual to have passengers socializing on the top deck until 3 or 4 a.m., Martinoli said. This meant that mornings were very quiet.

Second, the line had to develop a wide selection of mocktails, as well as non-alcoholic drinks, as alcohol is not allowed to be served on ships within Saudi waters, he said.

In terms of menu items, the line offered its usual array of luxury meals, such as caviar and truffles. The chefs learned a selection of local dishes too, so passengers had something familiar to eat onboard, Martinoli said.

Saudi welcomed a second Silversea ship, Silver Whisper, at both Jeddah and Yanbu ports last week, and a plaque and key exchange ceremony was held at both.

Stay tuned for more coverage from Silver Dawn later in the week.