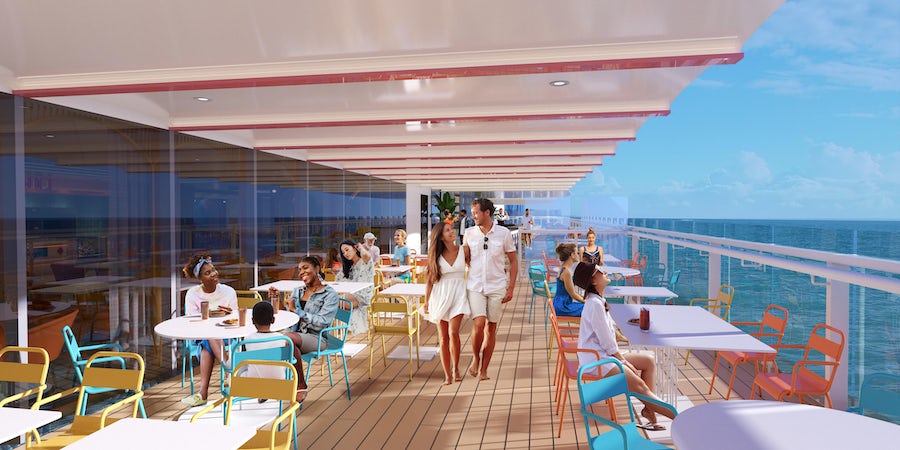 (2:15 p.m. EDT) -- To celebrate the culture of the city it has called home for five decades, Carnival Cruise Line announced Wednesday it has created a special Miami-themed zone aboard its forthcoming Carnival Celebration.

Called 820 Biscayne after the address of Carnival’s original headquarters, the new area aboard Carnival Celebration will be located on Deck 8, in the same location as La Piazza on sister ship Mardi Gras.

820 Biscayne will feature a similar layout and venues, but with influences and design elements that reflect what Carnival describes as "the urban-meets-laid back" vibes of Miami.

"Miami has been our home for 50 years, and in bringing a brand new ship to its port, we wanted to show some extra love to the city that helped us become who we are today," said Christine Duffy, president of Carnival Cruise Line. "Carnival Celebration will celebrate all things Carnival, intertwining where we have been with where we are going, and we can’t think about where we started without thinking about Miami and all of the fun that it represents."

Food and beverage offerings in the zone will include Bar 820, a half inside, half outside retro-inspired bar with grab-and-go Cuban and specialty coffees as well as Miami-inspired tropical frozen drinks and creative martinis; Deco Deli, an Art Deco-themed sandwich shop featuring Deli classics alongside Cuban favorites; and Miami slice, a 24-hour pizza spot with a contemporary and vibrant décor reminiscent of the late-night eateries on Miami’s bustling Ocean Drive.

The zone will also feature Miami-themed artwork and fun photo opportunities, such as posing with flamingos on skateboards

"We wanted to continue to give our guests the delicious and fun offerings they know and love from Mardi Gras but with new identities that pay tribute to the rich culture of Miami, a city that is so special to all of us," said Ben Clement, senior vice president of new builds, refurbishment and product innovation. "Miami is a one-of-a-kind city with many different sides to it, so we tried to capture all of that in 820 Biscayne – from the tropical feel and original Art Deco designs that can still be found on Miami Beach today to the modern city look of Brickell – and of course, with a huge emphasis on the delicious flavors throughout."

Guests will still find favorites like Rudi’s Seagrill, which was introduced on Mardi Gras, and Cucina del Capitano, which will be redesigned with a new look and feel that reflects the sleek and airy restaurants often found in Miami, the company said.

Carnival noted additional details and zones on Carnival Celebration will be revealed in the months leading up to the ship’s inaugural sailing from Miami on November 21, 2022.