You may also like
Dismiss
Maine Opens to Overnight Cruises, Negative COVID-19 Test Required
Just Back From Hurtigruten's Finnmarken: The First Cruise Ship to Set Sail, Post-Covid
Hurtigruten Ramps Up Return to Cruising With Most of the Fleet in Service by September
Wave Season Cruise Deals 2021
Adventures by Disney to Offer First Expedition Cruises Geared Toward Families
Ships on the Move: Your Weekly Cruise Ship Round-Up
Cruising the Newest Ship Afloat: Live From Celebrity Apex
Live From Royal Caribbean's Odyssey of the Seas: Why You'll Never Be Bored on This Cruise Ship
NCL Reveals More Dining, Design Details on New Cruise Ships Norwegian Prima and Norwegian Viva
Just Back From Allure of The Seas' Maiden Galveston Sailing: Hits and Misses 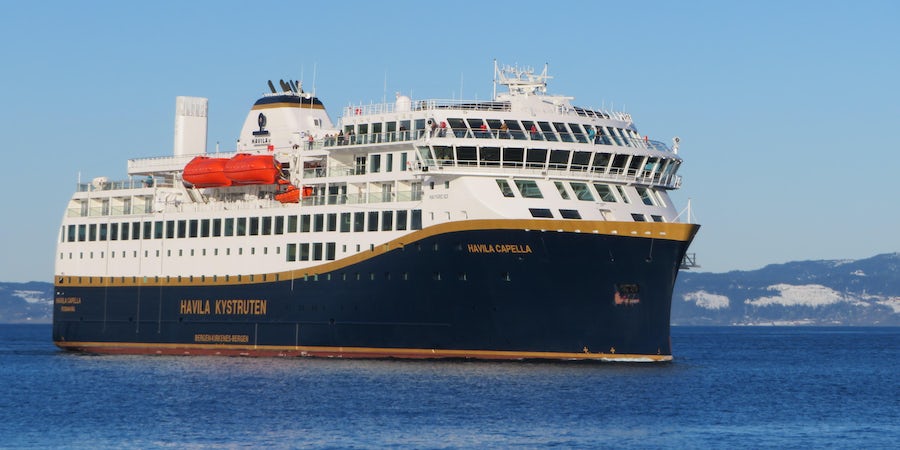 Live From Havila Capella: What It's Like On A Havila Voyages Cruise Along the Norwegian Coast

Havila Voyages is the new kid on the block on Norway's famous Bergen-Kirkenes-Bergen coastal sailing. Now running alongside established name Hurtigruten, Havila has launched the first new ship on the route in 18 years -- the eco-friendly hybrid-powered Havila Capella -- with three more newbuild vessels to follow.

The route is licensed and subsidised by the Norwegian government to ensure that small and inaccessible ports along the way have a year-round shipping service. Hurtigruten -- which will celebrate its 130th anniversary in 2023 -- previously held the monopoly. In 2018 the government announced that it was going to divide the 10-year coastal route tender into three in order to introduce competition and provide passengers with a choice. Hurtigruten, which previously operated 11 ships, was awarded two contracts with the third going to Havila. Hurigruten will now operate seven ships and Havila will run the remaining four.

Havila Capella has 179 cabins for cruise passengers that want to sail along the coast which is renowned for its beautiful scenery. We're aboard Havila Capella on a section of the 11-night round-trip sailing that stops at 34 ports along the way. Here are some of our impressions of Havila Capella:

We've been on many ships since cruising resumed post-pandemic and this is the first one that feels like "normal". Norway no longer has any testing requirements or restrictions on mask wearing and this is the first time we have been able to move around a ship freely without masks -- and it feels good. That said, some crew and passengers choose to wear them. As an ongoing precaution there are plenty of hand sanitising facilities around the ship and a machine that takes your temperature as you enter the restaurant.

There Is a Lot of Attention to Detail on Havila Capella

Havilla Capella is a dual purpose vessel that can accommodate up to 640 passengers in the cabins or as foot passengers in the lounges. Although it is a working ship, transporting people and goods from place to place, it also has all the amenities and feel of a small and cosy cruise ship.

We like the thought and attention to detail that has gone into different areas, such as the understated and tasteful Scandi-cool decor. There are crackling "fires" in the lounge, old photos and tales about Nordic heritage on the walls and trendy artwork that adds colour to the stairwells and other areas. On the first night in the dining room I froze when I leaned back on the brand new chair and heard a slightly ominous creaking noise. It turns out that the backs on all the chairs recline so you can sit back satisfied after a good meal. It's a nice touch.

The cabins, which include some swish suites with their own private hot tubs, are well fitted out and -- music to the ears of Brits -- include a kettle. There are also USB ports and, another bonus, Wi-Fi is free.

Outside there's a full walk-round promenade deck to make the most of taking photographs of the passing scenery and an upper viewing platform. There are handy push button doors to get onto the outside deck which is useful if you are carrying camera equipment.

Food is a standout feature on Havila Capella and we are really enjoying the concept of an ever-changing menu of small tasting plates (you can order as many as you want), served for lunch and breakfast in the main dining room and supplemented with larger main course portions in the evening. Showcasing fresh, locally sourced produced from the regions visited along the coastal route, the menu is divided into four parts -- flavours of the fjords, polar region, Arctic and archipelago -- and changes every three days. You can expect to find plenty of fish along with local specialities such as reindeer and, if the thought of that is too much, an imaginative vegetarian section. The food, including a vegan green breakfast, tastes and looks very healthy so we're hoping this might be one cruise where we don't put on any weight!

For an additional fee of £25 there's the fine dining restaurant Hildring. This is a five-course tasting menu of local foods with suggested wine pairings, which cost extra. On the night we visited it featured king crab, scallops, turbot, lamb and a cloudberry dessert and was delicious. A vegetarian option is available.

The Norwegian theme continues at the bar with local beers and cocktails, such as the very drinkable fjellbekk made with lemonade, aquavit and triple sec, alongside imported wines and mainstream drinks.

There's no escaping from the fact that prices in Norway are very sobering. A glass of wine starts from around £9 and a bottle is £44. Havila Capella offers three drinks packages covering coffee, soft drinks and alcohol, which makes the cost more palatable, along with the option to upgrade to a gold package that includes extra food choices and a meal in Hildring.

For eco-conscious travellers Havila Capella features an impressive raft of new technology. The ship is a hybrid vessel powered by liquefied natural gas (LNG), which is the cleanest marine fuel, and electric engines. According to Havila Voyages, the ship is equipped with the world's largest battery packs, weighing 86 tons and the equivalent to 600 Tesla cars. The batteries are charged from shoreline supplies and enable Havila Capella to sail through for up to four hours without noise or emissions. They are mainly used when sailing through the vulnerable eco-systems of the fjords and provide passengers with a quiet and peaceful environment to admire them. Additionally, the hull has been designed to move through the water with maximum efficiency and excess heat from the engine rooms is recycled and used for onboard heating. All cabins feature individual ventilation systems.

Excursions on Havila Voyages Are Fun And Engaging

Havila Voyages' passengers are typically an active and enthusiastic crowd looking for new experiences. This is reflected in the choice of optional shore excursions that are available in ports where the ship is docked for several hours. In keeping with the company's eco-friendly ethos they include an electric bus tour in Bergen, e-biking in Norangsdalen and plenty of bracing hikes.

Our standout favourite is the husky sledding in Tromso which includes meeting the friendly dogs and cuddling three-week-old puppies.

Back onboard there's a fun "christening ceremony" when Havila Capella crosses the Arctic Circle. Njord, the Norse god of the sea and wind, puts in an appearance to douse any willing passengers with a large scoop of icy water. After the chilly ritual we enjoyed the reward of a shot of cloudberry liqueur.

You Won't Sleep Through the Northern Lights (Unless You Want To)

One of the main reasons people visit Norway between September to early April is try and catch a glimpse of nature's spectacular light show the aurora bolearis, or northern lights (and we were lucky enough to do so). The phone in the cabin has a "Nor Light" button which you can press if you want to be woken up if the lights make an appearance during night-time navigations (which they did!). A great idea.

Havila Capella is a Work in Progress

Havila Voyages is the first foray into passenger ships for the family-owned Havila group that dates back to the 1950s and is involved in shipping technology, offshore operations, transport and tourism. The launch of the ship was delayed due to the pandemic during our sailing some things are still bedding in and getting up to speed. Waiting staff order meals through electronic pads and, in our large group and with an extensive menu, this seemed to cause occasional confusion at mealtimes. In the evening the menu features more traditional main courses but there wasn't a vegetarian one, so it was a case of ordering more of the smaller plates; again something that is going to be fixed.

Tweaks are also going to be made to the onboard offering and future passengers might expect to see a programme of activities such as gin tasting workshops and craft sessions.

What's the Difference Between Havila Voyages and Hurtigruten?

Havila Voyages provides an authentic taste of Norway and a very comfortable new base to soak up the stunning series of the Norwegian fjords on flexible journeys that can take in the entire 11-night sailing, six-night northbound or five-night southbound legs, or one- and two-night taster sailings.

And far as the route is concerned, there is no difference. Both lines sail on exactly the same stretch of coastal water, call at the same places and offer a wide range of excursions with a choice of active and more sedentary shore tours.

The biggest difference boils down to whether you want to travel on a brand new ship or an older-style vessel; with MS Richard being the last Hurtigruten ship to be fully refurbished in 2018. The like-for-like cabins on Havila are mostly bigger, have fewer old-style bunk beds and there are private hot tubs in the two top suites.