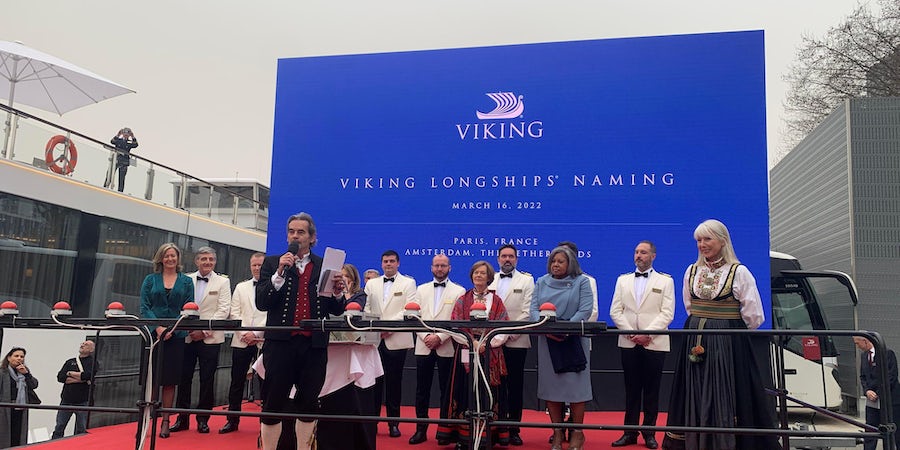 (12:20 p.m. EDT) -- With the Eiffel Tower serving as a spectacular backdrop, Viking's naming ceremony for eight new river cruise ships went off without a hitch Wednesday in Paris.

It's tough to imagine a better setting than Paris, as the cruise line introduced the world to four new Viking river cruise ships aimed at sailing the Seine River in France. The line concurrently christened four additional ships in Amsterdam, and the ceremony was watched virtually from Paris.

In the maritime world, a naming ceremony is a tradition thought to bring luck to new ships and those who sail them.

Paris' pierside Viking naming ceremony was the first big in-person to-do for the line since the pandemic and marked what the cruise line hopes is an auspicious start to the 2022 river cruise season. The ceremony itself was somewhat subdued compared with events of the past, in part because of the war in Ukraine, Viking Chairman Torstein Hagen said.

The tone of the ceremony was festive, as revelers were greeted by a French choir, singing from Viking Radgrid under gray skies and cool temperatures. While the atmosphere was somewhat subdued, the excitement was palpable.

Executive Vice President Karine Hagen kicked off the pomp and circumstance, introducing Helen Deutscher, who released a white dove as a symbol of peace in this time of turmoil. This was followed a release of a larger group of doves.

"Some much needed peace love and hope flying into the skies of Paris," said the event's emcee, Alastair Miller.

The heart of the ceremony was quickly underway, with the godmothers, one by one naming their ships, each saying, "I name you Viking (ship name). May your passengers and crew always be safe, and may you always have a hands-width of water beneath your keel."

The godmothers represented a cross section of women from a broad swath of arenas, including music and the arts, government, education and travel. The youngest two, Alma Deutscher, 17, and Helen Deutscher, 14, are prestigious musicians who consider Hagen "to be their adopted grandfather."

In turn, each godmother then pressed a button, releasing a mechanism attached to a bottle of aquavit. Each bottle successfully smashed against the side of its respective ship. During naming ceremonies, convention generally sees a bottle of Champagne smashed on the side of a vessel, though Viking has eschewed the ritual bubbly in favor of a bottle of aquavit, a centuries-old spirit made in Scandinavia. Viking's roots are in Norway, where Hagen is from.

With all ships successfully named, the horns of all eight ships were sounded. The addition of these eight new ships brings the Viking river fleet total to 80.

The French-waterway specific ships feature 84 cabins, including a number with traditional balconies. French balconies are more common on river ships, and while these ships offer those as well, guests can enjoy true walkout verandas on the starboard (right) side of decks 2 and 3.

All of Viking's river cruise ships feature the line's famous Aquavit Terrace, a lovely forward space that combines indoor and outdoor spaces ideal for cruising along Europe's most famous waterways.

Viking river ships are virtually identical to one another, by design, and feature Scandinavian decor, mostly inclusive itineraries and serene top-deck spaces. While Hagen is reluctant to call his ships "luxury," Cruise Critic identifies them as such, based on factors including the high level of service, the inclusive nature of the sailings, passenger-to-space and crew-to-passenger ratios and pricing. Hagen routinely describes Viking as the "thinking person's" travel brand. All Viking cruise ships offer adult-only experience, with no casinos or whiz-bang onboard activities.

The four new ships sailing in France feature customized hulls and engines designed to navigate the Seine, allowing the ships to dock within walking distance from the Eifel Tower; you literally can see the landmark from where the ships tie up.

Viking Gymir, Viking Egdir, Viking Hervor and Viking Gersemi will sail on the various waterways of Europe, including the Rhine and Danube rivers.

It's been a busy year for Viking, which is celebrating its 25th anniversary. Last month, Viking officially branched into the expedition cruise space with the launch of its first adventure ship, Viking Octantis. It will add sister ship Viking Polaris later this year. The company also is launching its first U.S.-based river ship, Viking Mississippi, this summer.

By midyear, the company will have added a total of 16 new ships during the pandemic, including two purpose-built vessels to sail on the Nile and Mekong rivers.

Viking was the first cruise line to opt to shut down due to COVID-19 in March 2020. Since then, the company has come out with stringent health and safety procedures that include daily onboard saliva testing for the virus. On May 17, 2021, Viking returned to sailing on the oceans, and all of the line's ocean vessels have been in operation since the end of July.

"I consider this thing, COVID, is really behind us," Hagen said in a news conference Wednesday prior to the christening activities. The company, according to Hagen, is seeing growth ahead of pre-pandemic 2019 numbers.

Viking will no longer require passengers to wear masks starting April 1, though crew will continue to do so. Hagen said onboard testing still will be required, though the frequency could soon be reduced.