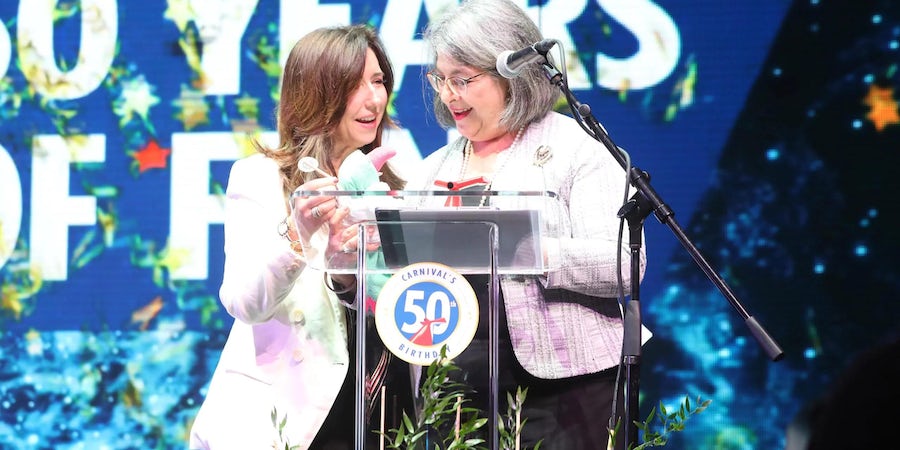 Celebrations took place onboard while the ship was appropriately docked at PortMiami, where Mardi Gras had launched 50 years prior before running aground just outside the PortMiami channel, an inauspicious start to some at the time.

"We have leaned into who we are for 50 years," said Duffy. "We don't stray far from our core which has always been fun!"

Duffy went on to thank the many Port Miami and travel agent partners present and mentioned "the over 700 shoreside team members who celebrated in our headquarters in Doral".

Introductions for Arison, Donald and Carnival chief operating officer, Josh Weinstein were met with a standing ovation from the crowd. Special recognition was given to Terry Thornton, former senior vice president of Nautical and Port Operations for Carnival, and to Maurice Zarmati who had ended his 43-year tenure as Carnival's senior vice president of sales. Zarmati's career with Carnival began before the company was founded, back when he worked for Arison Shipping.

In addition, Vicky Rey, vice president of Stakeholder Engagement/Deputy Ethics and Compliance Officer, and Adolfo Perez, senior vice president of global sales and trade marketing were also acknowledged for their more than 40 years at Carnival.

Remembering the many Carnival Cruise Line crew members from Ukraine, Duffy sent her heartfelt thoughts out to them, noting that Carnival will be donating $50,000 to World Central Kitchen, the Chef Jose Andres organization helping to feed those in the war-torn region.

Nostalgia set in when a video was introduced showcasing Carnival Cruise Line founder Ted Arison and the momentous maiden voyage of the Mardi Gras out of PortMiami.

"It all started with a vision of our founder Ted Arison," said Duffy, "And we have worked for five decades to stay true to that vision. Ted was all about the people."

Duffy also proudly announced that all Carnival ships will be back in service by May of 2022, and Carnival's newest ship, Carnival Celebration, will arrive in Terminal F later this year, a grand finale to the company's 50th birthday festivities.

Carnival Corporation President & CEO Arnold Donald then took the stage to present Arison with his 50-year service pin and expressed heartfelt gratitude for Arison's father Ted for "creating hundreds of thousands of jobs plus special moments and memories that have improved so many people's quality of life."

Many proclamations were presented to Christine Duffy during the ceremony, beginning with Congresswoman Frederica Wilson wearing one of her signature hats. Wilson revealed a special proclamation, all the way from Washington, D.C., stating that Carnival's 50th Anniversary will be placed in the Library of Congress.

City of Doral Mayor JC Bermudez followed, giving his thanks to Carnival Cruise Line for being headquartered in Doral, Florida. He then presented Duffy with a proclamation, followed by giving Arison a key to the city, something Bermudez stated he only does on very special occasions.

Miami-Dade County Mayor Daniella Levine Cava was all smiles as she took the stage and thanked Miami-Dade County Commissioner Rebecca Sosa for being instrumental in bringing Shoreside Power to PortMiami. She also took a moment to recognize newly-appointed PortMiami Director Hydi Webb in what became a show of women empowerment.

Mayor Cava then presented Duffy with a crystal award. Duffy quickly reciprocated with a fun, light moment by presenting the Mayor with one of Carnival Cruise Line's signature towel animals.

The event was a fitting tribute to honor one of the travel industry's great success stories.